Lead is a heavy metal and can easily cause a toxicity (called plumbism). Other heavy metals, notably zinc, can also cause toxicity.

Birds are sometimes drawn to shiny objects, hence they will eat metallic objects that can contain lead. Birds are natural chewers and will chew cage bars and painted walls. In older homes there are sometimes layers of paint below the surface layer that contain lead. Lead particles can build up on the ventriculus (gizzard) and become toxic if in large enough quantity.

Lead is a heavy metal that is poorly absorbed by the intestines. Unfortunately, only a small amount is needed to cause problems. It eventually gets distributed to all body tissues, with particular emphasis on the digestive system, the red blood cells, the bone marrow, the liver and the nervous system.

Symptoms depend on how much lead is ingested over how long a period of time. The disease is sometimes broken down into acute lead toxicity and chronic lead toxicity.

In the acute version birds might be weak, depressed, produce abnormal droppings, and vomit. Neurologic signs could include walking in circles, twitching, incoordination and even convulsions.

Chronically infected birds can have similar symptoms to acute toxicity. In addition, they might lose weight, be partially or fully paralyzed, and even blind.

In some lead infected birds there is a history of recent chewing of paint on the walls. In some cases the owners did not suspect any exposure to lead.

The physical exam may or may not reveal significant abnormalities. It all depends on how much lead has been ingested over how long a period of time.

This bird has lead toxicity. It chewed the paint on the floor after the owner did some remodeling in an old home. He is alert and eating well but cannot walk well on his back legs. 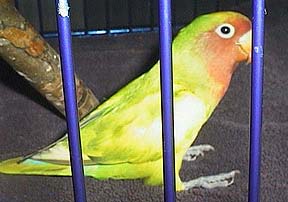 A blood panel might be useful in this disease. In some birds we might see anemia or evidence of liver disease. When we suspect lead toxicity we can run a lead level on the blood.

This is from the bird above. His lead level is 0.5 parts per million, far above the normal range of less than 0.06

Some brids can have a zinc toxicity also.

One of the most consistent ways to diagnose lead toxicity is with an x-ray. Lead is a heavy metal and will show up vividly on a radiograph, usually in the ventriculus (gizzard).

This radiograph is also from the above bird. It has normal grit in the gizzard, but if you look closely some of the grit looks brighter than normal. The brighter objects are lead particles, not grit. 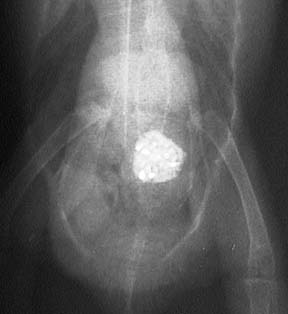 Birds that are weak, losing weight, or not eating need supportive care. This consists of fluids and supplemental feeding. We will frequently hospitalize them until they regain their strength. If they are having seizures we can put them on anticonvulsant medication.

It is important to try to remove the lead from the ventriculus. Treatment with lubricating agents or even peanut butter will help pull the lead out of the gizzard to be passed in the droppings. On rare occasions, especially if the lead particles in the ventriculus are too large to pass, we will perform surgery to remove them.

Once your bird is stable and we have attempted to remove the lead from its ventriculus we use a class of medications called chelating agents. Their job is to go into the organs, especially the bone, where the lead has accumulated and counteract its affects. It can take several courses of treatment to completely treat your bird. These medications are not without risk, so they are used intermittently to give your bird a rest period in between doses.

We will treat until the lead level in the blood test is back to normal and there is no more radiographic evidence of lead in the ventriculus.

It is the nature of birds to be chewers and put metallic objects in their mouth. Minimizing their exposure to lead containing objects is an obvious way to prevent this problem. Also, feeding them a balanced diet (not just seed) will help keep them from looking for nutrients they need and are not receiving in their diets.