The United States Department of Agriculture regulates the importation of domestic birds in order to protect the domestic poultry industry. These imported birds must be accompanied by a health certificate. Upon admission they are quarantined for 30 days at a special facility and tested for Newcastle disease. During the 30 days they are given food supplemented with medication that will treat Psittacosis. This medicated feed needs to be continued for at least an additional 15 days when the bird is released from quarantine.

Psittacosis is a reportable disease. When a positive diagnosis of Psittacosis is made an inspection might occur to determine the cause of the outbreak, number of birds affected, and any human exposure. Depending on the specifics of the situation a quarantine and treatment might be initiated.

Humans can get Psittacosis (Chlamydia psittaci) from birds. Cats get Chlamydia psittaci and show evidence of eye problems, but there is no evidence that cats can spread this disease to people. Other species of the Chlamydia bacteria that occur in sheep, goats, and cattle can cause disease in humans, but those diseases are not called Psittacosis.

Exposure is usually due to the inhalation of dried bird droppings that contain the organism, incubation is 6-19 days. Other potential sources of infection are from respiratory secretions and feathers. Symptoms in people range from nothing to severe disease with pneumonia. Typical symptoms include fever, chills, headache, muscle aches and cough. Inflammation of the heart, liver, and nervous system can occur, with even fatal cases reported. With proper treatment most people recover. According to the Centers for Disease Control and Prevention, between 50-100 cases of human Psittacosis are reported each year, with probably many more undiagnosed. Probably due to increased awareness and diagnostic testing, annual incidence of Psittacosis in humans is decreasing.

Psittacosis is caused by a bacterium called Chlamydia psittaci that is an obligate intracellular parasite. It has been isolated from many birds, especially cockatiels and parakeets. After exposure the incubation period can vary from 3 days to weeks.

Healthy birds can be carriers of Psittacosis, shedding the organism in their droppings intermittently. It is also found in respiratory discharge. Shedding is stimulated in birds by stress like overcrowding, chilling, and shipping. The shed Psittacosis bacteria can remain infectious in the environment for several months.

Birds are masters at hiding any symptoms of illness, especially in Psittacosis. An apparently healthy bird that is singing and eating in the morning can be gravely ill or be found dead by the same afternoon. It is imperative that you tune in to subtle signs of disease in your pet bird, and bring it in for an exam at the first sign of a problem. If you are unsure, it is better to be safe than sorry.

Some birds with Psittacosis do not show any symptoms and can become carriers, shedding the bacterium intermittently, especially when stressed. Others might get a chronic illness or become severely ill and die. Symptoms depend on age at infection, species, virulence of the specific strain of the bacterium, exposure amount, and stress factors.

Typical symptoms, if present, might include a fluffed appearance, poor appetite, weight loss, respiratory disease, and lime green droppings. The droppings might appear to be diarrhea, but in reality they are usually watery urates, the equivalent of bird urine. Some birds have ocular discharge, leading to the term “one eyed cold”. These symptoms occur with many other avian diseases, so it is imperative to follow proper diagnostic parameters when making this diagnosis.

This parrot has a problem as evidenced by its fluffed appearance. It is fluffed because a disease process is preventing it from keeping itself warm, so it is trapping air under its feathers in order to insulate itself. Birds that do this consistently are ill. Psittacosis can cause this, but so can many other bird diseases. 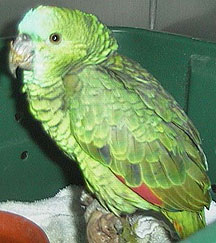 In some cases we have a high degree of suspicion because a bird has been imported into the country illegally. This means it has bypassed the USDA quarantine and treatment facility. These smuggled birds commonly come from Mexico. They can be purchased at swap meets for a low price, so you must be wary of these potential disease carriers.

The physical exam may or may not reveal significant abnormalities. An exam of a bird gives us limited information compared to dogs and cats. This is because of the unique anatomy and physiology of a bird. Several examples will elucidate this point.

Since a physical exam on birds yields significantly less information compared to a dog or cat, we need to rely more on diagnostic tests.

Taking a blood sample from the small veins of a bird is a refined art. One of our nurses is taking one from the leg vein of a cockatoo. 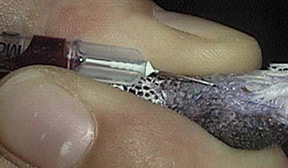 A blood panel might be perfectly normal, or it might show significant problems. This is a blood panel from a bird positive for Psittacosis on the ELISA test. The arrows point to the significant abnormalities. The white blood cells (WBC count) are elevated, it is anemic (HCT is low), and its liver test (AST) is high. These findings give us an indication that this bird might have Psittacosis, but they can also occur with other avian diseases though. 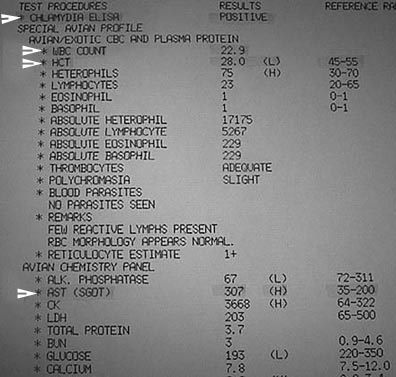 Another diagnostic test helpful in Psittacosis is radiology because it allows us to visualize internal organs. This radiograph is also from the above bird. It has an enlarged spleen (S), the circular structure in the middle of its coelomic cavity. 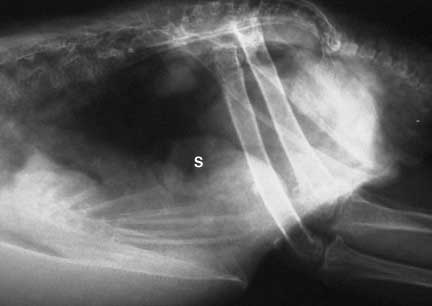 Culture is used to detect the Chlamydia organism itself, and is one of the most accurate methods of making an accurate diagnosis. It is time consuming, requires special techniques and laboratories, and since shedding of the bacteria can be intermittent, samples need to be collected for several days. Also, it can take up to several weeks before the result is available, which defeats the purpose of the test for many ill birds. Unfortunately, the laboratories that perform this culture are not readily available to us.

Psittacosis tests have been developed to aid us in our diagnosis. No test is perfect or applies to every situation and species. In some cases we will perform several of these tests to increase accuracy:

Unfortunately, Psittacosis is sometimes accurately diagnosed only at necropsy.

This dark red organ is the enlarged spleen of a bird that died of Psittacosis. 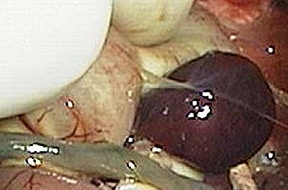 This air sac is cloudy, an indication of an infection. Psittacosis could be a cause of this. 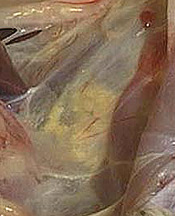 Birds that are suspected of having Psittacosis are immediately isolated. Protective clothing should be worn at all times when treating these suspects. Routine surgical masks might not be adequate to prevent exposure.

Birds that are weak, losing weight, or not eating need supportive care. This consists of fluids and supplemental feeding. We will frequently hospitalize them until they regain their strength. The mainstay of treatment is with the tetracyclines.

There are several different methods to get this medication into a birds system in order to achieve adequate blood levels.

Do not purchase a bird that seems ill or you suspect has been brought into this country illegally. New birds should be examined, tested, and quarantined for at least 45 days. During this 45 days these new birds can be treated also.

People with compromised immune systems should not be exposed to birds that might have Psittacosis. Gloves, masks, and protective clothing should be used when cleaning cages and working around birds suspected of this disease.

Clean cages and feeding bowls frequently, and set up housing so droppings, food, and feathers do not contaminate other cages.

Chlamydia psittaci is susceptible to routine disinfectants. Common ones include Lysol, bleach, 70% isopropyl alcohol, and Roccal.