Birds are occasionally infected with a mite called Knemidicoptes (if you want to make an effort at pronouncing this word the K is silent). We usually encounter this problem in parakeets (Budgies) at our hospital. This parasite causes extensive crusting and hair loss on the face and vent.  Fortunately, it is readily treatable. 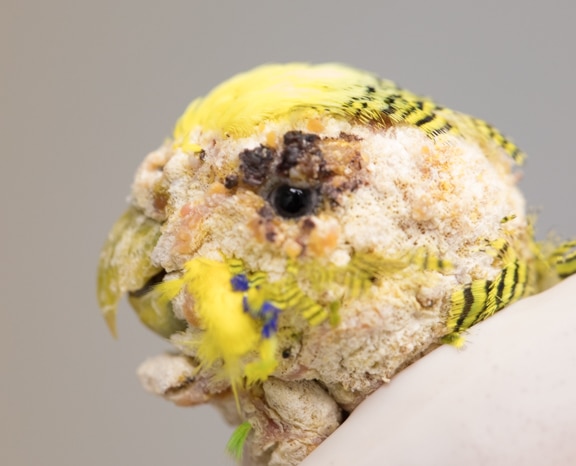 Birds with cases as severe as this are miserable 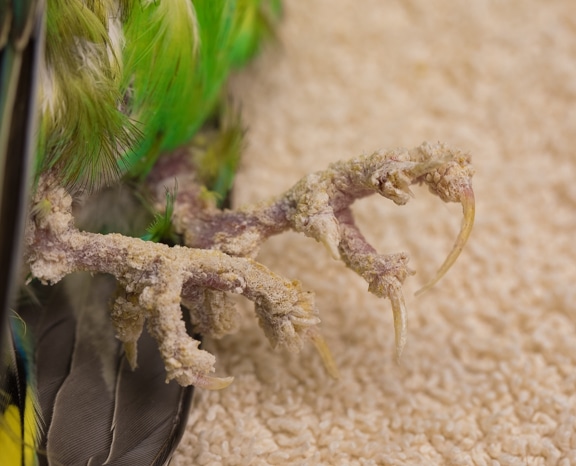 He cannot even walk as evidenced by his overgrown nails

Scaley face disease is caused by a mite called Knemidicoptes that is spread from bird to bird by contact. Some birds acquire this parasite while young and do not develop symptoms until they are young adults.

This disease is diagnosed by the character of the lesions and the fact that it has occurred in a Budgie. Microscopic examination by a skin scraping will reveal the mite. 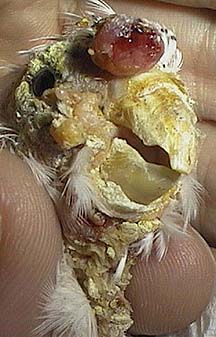 This bird has the telltale lesions of scaley face mites. There is crusting on the neck and face, and a honeycombed appearance to the beak. This is a severe case. In addition, this bird has a growth on its beak. 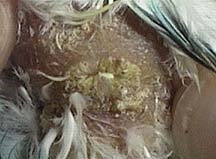 Lesions also occur in other areas, most noticeably in the vent and on the feet

Years ago the only treatment we had was an ointment that was used to treat pubic lice in people. It was messy and had to be applied daily, but it usually worked. Now we use the drug Ivermectin, given every week or two until the problem is gone, usually within 3-4 weeks. 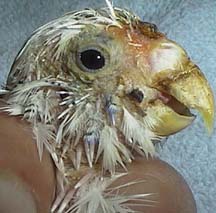 This is the same bird as above 10 days after its first Ivermectin treatment. We removed the growth on its head a few days before this using the laser. This is the only way to do this type of surgery in our hospital due to its tremendous ability to control bleeding, a critical point in an animal this small that only has a few drops of blood in its cardiovascular system. 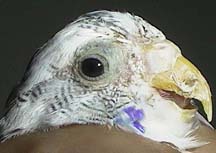 Here he is 2 weeks after his second treatment. He is almost completely healed and feeling a million times better. Hard to believe it’s the same bird.

He was brought into our clinic and dropped off as part of our wildlife program since he was a stray and was found by one of our clients. He has a great personality, and once we got him looking like this we had no problem finding him a home (with a girlfriend).

Other animals get mange mites. The more common ones are Demodex and Sarcoptes (scabies). 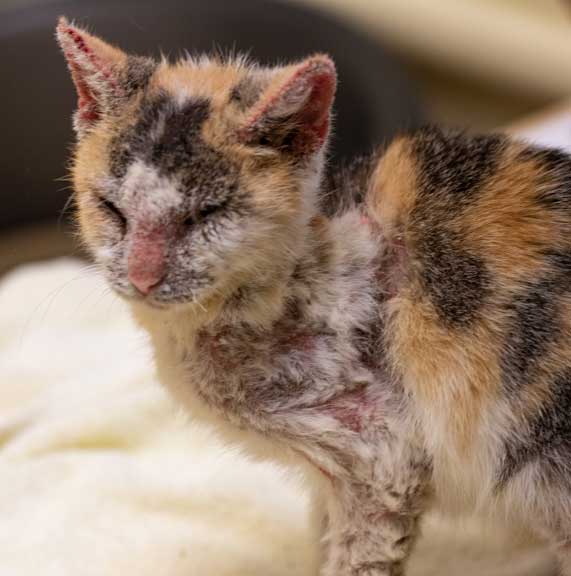 This poor cat has Scabies on its legs, face, and ears

Most birds with scaley face mites are not presented as an emergency, although it is quite possible due to the terrible appearance of these birds when they have been infected for a long period of time. If your budgie shows any sign of illness, no matter how minor, it is considered an emergency in veterinary medicine.

The Long Beach Animal Hospital staffed with emergency vets is available until the evenings 7 days per week to help if you see this in your pet, so please do not wait or attempt to take care of this problem on your own. If you have an emergency always call us first(562-434-9966) before coming in so that our veterinarians can advise you on what to do at home and so that we can prepare. To learn more please read our Emergency Services page.