On occasion a dog or cat will dislocate its hip. This page shows the treatment of a poodle mix that fell while running, and is now completely lame on its rear leg.

The diagnosis in this case is made with x-rays after an initial examination. The exam gave us clues that the pain was caused by a dislocation. When we gently extended the rear legs (depending on the type of dislocation) the dislocated leg appeared shorter than the normal leg.

This x-ray is of a dog with a dislocated hip. The ball of the left femur is completely out of the socket. Ligaments and the joint capsule have been torn for this to occur.

Some pets with dislocated hips can be corrected without the need of surgery. Whether or not this occurs depends on the extent of the damage, especially to the ligaments, tendons, and joint capsule. 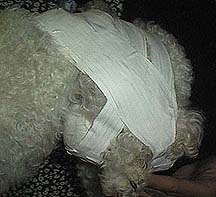 A radiograph is taken immediately after application of the splint to be certain the femoral head is still in the socket. One week later we repeated the x-ray to be certain it was still in place. This splint stayed on for 3 weeks, and this pet eventually healed completely. 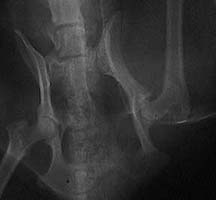 Pain medication will be given to minimize discomfort. This dog will need to be confined and have minimal activity for several weeks.

In many cases we have to resort to surgery to correct the dislocation. When the hip is replaced in these dogs it does not stay in the socket.  We have pictures of the surgery