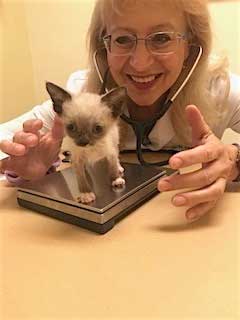 Dr. Kennedy volunteers as foster care for orphaned kittens, with the Southern California Siamese Rescue organization (cs.siameserescue.org). Animal shelters typically get flooded with young orphaned kittens in the springtime, and this year is no exception. Unfortunately, they cannot provide the care needed by very young kittens, who are often suffering from a variety of respiratory and intestinal infections, as well as fleas and viruses.

Kitten rescue organizations such as SCSR pick up these orphans and find foster volunteers who can raise them until they’re old enough to be adopted out. They’re spayed and neutered before adoption, as well as being tested for Feline Leukemia (FeLV) and Feline Immunodeficiency virus (FIV). 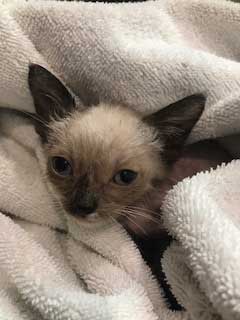 All of Dr.Kennedy’s foster kittens are viral negative, but many have worms. Some of the kittens have been hospitalized and given IV fluids, which is why some have shaved patches on their front legs. These protozoal infections can be very persistent and sometimes deadly in young animals, so it’s extremely important for puppies and kittens to be dewormed and tested several times throughout their first year. Our web site has much more information on worms (internal parasites). 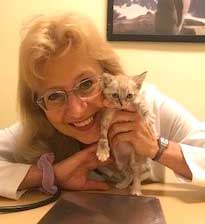 Dr. Kennedy’s kittens very likely were infected with Giardia and Coccidia before they were born, and needed some help getting over their infections and returning to health. Most are doing very well, even ‘Jamaal,’ who was only six ounces when he arrived from Tijuana. Being so small, he’s needed more intensive attention, including assist-feeding to help him gain weight. He’s a trooper, and is now nearly eleven ounces. Once he reaches two and a half pounds he’ll be neutered and ready for adoption. You can find out more at cs.siameserescue.org.