Intestine Tumor in a Cat

Tumors are common in cats, especially as they get older. This page describes how we treated an intestinal tumor in an 11 year old cat named Ruby. The format in this page will be different than our other disease pages. In this one we will present it as a case study, and show the diagnostic process that allowed us to make this diagnosis.

We will follow the parameters of the diagnostic process in this case, the same process we use in every diagnosis me make. If you are not familiar with this process click here  for a quick review, then come back to this page and continue the case study. You need to have an understanding of the diagnostic process in order to appreciate the thought process involved in making Ruby’s diagnosis.

This page has graphic surgical pictures.

Domestic short haired cats have no breed predilection, so this information does not narrow down the list of possible diseases at this point. Since Ruby is spayed there is negligible chance of a reproductive problem like pregnancy or an infected uterus, called a pyometra.

Her age is very important because it brings to mind some of the following diseases:

Ruby has been lethargic and not eating for 2 days. She seems painful when picked up and has been vomiting a yellow fluid. Other important parameters like bowel movements, breathing, and urination are normal.

This information is helpful because now we start getting a feel for the extent of Ruby’s problem. It is unusual in that she is vomiting and has not eaten in 2 days, yet her bowel movements and urination are normal. A pet that has these symptoms is almost always dehydrated and would not be having normal bowel movements and urination. This discrepancy in the history is not uncommon in many cases.

Because of the new information we obtained in Ruby’s history, we need to add infection, intestinal foreign body, abscess, liver disease, FeLV, FIV, FIP, kidney disease, hyperthyroidism, and even poisoning to her potential disease list.

This is one of the most important parts of our diagnostic process. It is a list of the most likely diseases that are causing Ruby’s problem. Based on this list we will perform specific diagnostic tests to narrow the list down to the most likely disease processes occurring. We will also institute treatment based on her problem list and the differential diagnosis. We always initiate symptomatic treatment before our test reports return. This decreases our patients’ discomfort as soon as possible, and allows us to treat the problem earlier which is always an advantage in healing.

By running diagnostic tests we rule in or rule out the diseases in our differential diagnosis list above. In Ruby’s case we initially ran a blood panel and took an x-ray.

The blood panel revealed an elevation in her white blood cells. Tests of the liver, kidney, pancreas, red blood cells, protein, and viruses were all normal.

A radiograph was taken of Ruby’s abdomen. The stomach, kidneys, large intestines, and bladder all appeared normal. The liver was slightly enlarged (called hepatomegaly). There was a large soft tissue mass effect in the center of the abdomen.

Here is a normal cat abdomen radiograph- compare it to Ruby’s below. The normal organs are identified: 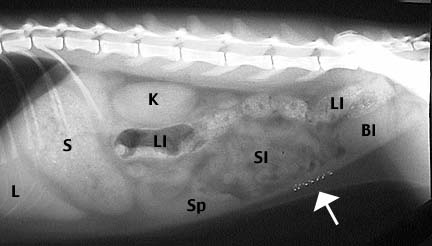 Here is Ruby’s radiograph. The large white section in the lower center is the problem area. This is where the small intestines (SI) are in the above radiograph. Can you see the liver, stomach, and kidneys? 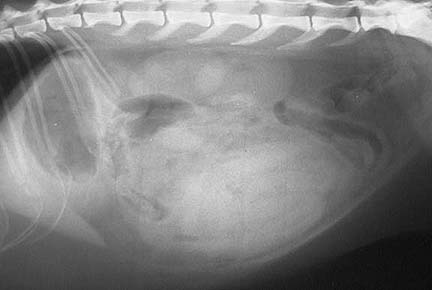 A tiny needle was inserted into the mass in her abdomen and some cells were removed for analysis by a pathologist. This test is called an aspirate, and the analysis of these cells is called cytology.

The normal blood panel, except for the elevated white blood cell count, minimizes the chance of liver, kidney, and feline viral diseases. The x-ray eliminates constipation as a cause to Ruby’s problems. The report from the cells taken from the abdomen indicates there is infected or dying tissue in the abdomen. This is a serious finding and necessitates immediate action.

Based on these test we can now refine our differential diagnosis:

A determination had to be made as to the appropriate course of action for Ruby’s condition. This is based on her age, cost, convalescence, and prognosis. These important points are discussed with Ruby’s owner prior to any further treatment. The main decision for her owner at this point is to perform ultrasound versus surgery. Each has its advantages and disadvantages:

No anesthesia is required and Ruby does not have to undergo the trauma of surgery in her abdomen. Ultrasound is very accurate, the results of the ultrasound are immediate, and biopsies can be obtained accurately. With the ultrasound an expert can literally visualize the internal structures of an organ and make a determination on whether or not it looks healthy. 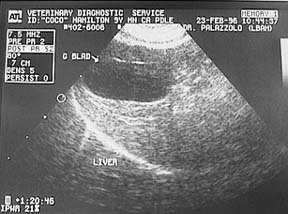 Our ultrasound doctor is giving us a demonstration of how the biopsy is obtained. 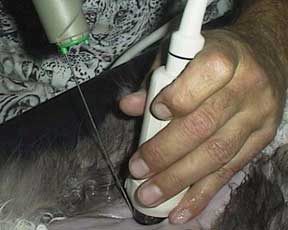 Only a small amount of tissue is obtained with this method. When analyzed microscopically by a pathologist a significant amount of information can be obtained. 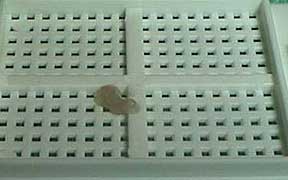 Surgery might be inevitable, so why delay. No treatment can be given with ultrasound, it is for diagnostic purposes only. Delaying prolongs the time it takes to ultimately correct Ruby’s problem and adds additional costs to the bill if we do proceed with a laparotomy.

An exploratory surgery in Ruby’s abdomen is called a laparotomy. It has the advantage of giving us an immediate diagnosis and gives us an opportunity to treat the condition (if the problem is not too far gone). Also, the surgeon can literally see the internal organs in their natural color instead of grey images on an ultrasound screen.

It is a an invasive procedure that has risks, including the anesthetic risk. Even though the surgeon can palpate internal organs, he can not look at their internal architecture like the ultrasound does. Also, there is  post operative discomfort and convalescence when a surgery is performed. With modern anesthetics and pain medication we can do almost any surgery in an older pet and not have any problems.

In Ruby’s case a decision was made to perform a laparotomy. We were fairly certain of our diagnosis and the need for surgery, so why prolong the inevitable.

Treatment was initiated as soon as Ruby was admitted to the hospital This treatment consisted of intravenous fluids to correct her dehydration and lethargy. She was also given intravenous antibiotics and fed a special food. Her temperature was also closely monitored. Here is a picture of part of her medical record on the day of surgery:

Status BAR means she was bright, alert, and responsive Weight- 12 # 11 ozTemperature- 103 degrees F Appetite- NPO means “nothing per os”. This is a Latin abbreviation for no food given in anticipation of surgery. Urine- NormalBowel movement- noneOur nurses noted that she had vomited during the night and she was scheduled for a laparotomy surgery sometime today. Her treatment consisted of lactated ringers solution. She was given 250 milliliters intravenously every 12 hours. Baytril, her antibiotic, was given at 1.3 milliliters intravenously every 12 hours.

The following area contains graphic pictures of an actual surgical procedure performed at the hospital.

Ruby was anesthetized and brought into surgery when she was anesthetically stable. A 7 inch incision was made in her abdomen and her internal organs were assessed.

We suspected Ruby’s problem was with her intestines, so we immediately assessed them. The diseased area was found and brought out through the incision in her abdomen. Not only were the small intestines swollen and discolored, there was a ruptured area of infection and dead tissue. The oval mass in the picture below is a tumor in the small intestines. There is an opening in the center where it is dead and has ruptured into the abdomen.

In this picture the larger black arrow on the top points to the diseased intestine, while the smaller 4 arrows in the center point to metal clips that have cut off the blood supply to the disease intestine. 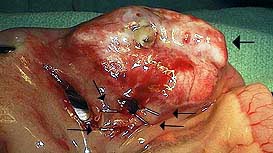 After cutting its blood supply the diseased tissue is removed by cutting between the 2 clamps. The clamp on the right (arrow) is on the diseased portion of the small intestine. The clamp on the left (arrow) is a very gentle clamp that keeps any intestinal fluid from spilling out of the cut end of the normal intestine. We are using the scalpel blade to make the actual cut between the 2 hemostats. 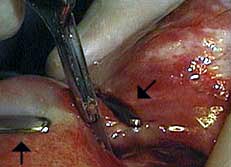 The opening of one end of the normal intestines is now visible towards the right immediately after it has been cut. The center of this opening is lined with pink tissue called the mucosa, the white area around it is called the submucosa. The submucosa is thicker than normal, indicating that there might be additional disease in this section and further intestine might need to be removed.

The tedious process of suturing the cut ends of the intestines (called an anastamosis) begins. These sutures are critical if there is to be healing and to prevent leakage of intestinal contents into the abdomen when this pet eats. The first suture is shown being placed as the process is begun. 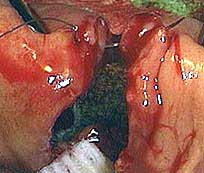 Part way through the suturing you can see the intestines coming together nicely. The bleeding is a good sign because it is a general indication of healthy small intestine. 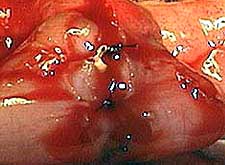 When all of the sutures are placed a small amount of sterile saline solution is injected into the anastamosis site to check for leakage. 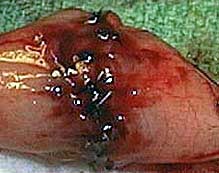 This is a good overall view of the anastamosted section of intestine (see arrow). You can see how this section of small intestine is more inflamed than the normal section below it. 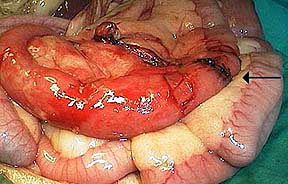 With the intestinal problem corrected we explore the rest of the abdomen for any other problems. Nature works in complex ways, and just because we found a problem in one area does not mean all the other abdominal organs (including more intestine) are disease free. This picture shows a normal spleen in the top left along with normal intestines on the bottom. 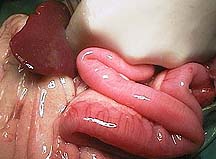 The diseased tissue had ruptured which means there is an infection in the abdomen (this is called peritonitis). To alleviate this infection we flush the abdomen with copious amounts of warm saline solution. This picture shows our suction apparatus removing some of the fluid that was flushed into the abdomen. 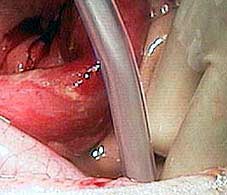 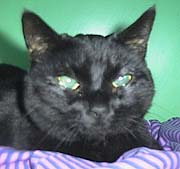 Ruby had a tumor in her small intestine called a Mast Cell Tumor. Compared to most abdominal tumors we diagnose it is a relatively rare form of tumor, and it is seen only in the cat. There is the possibility that it might spread to intestinal lymph nodes or even liver later in its course. It is difficult to say what will happen in the long term, so her prognosis is guarded.

In addition to the surgery we put Ruby on medication to minimize side effects from the tumor. Mast cell tumors have the potential to release a compound called histamine. This can cause a type of allergic reaction and even cause ulcers in the stomach lining. Ruby is on medication to counteract this problem.

Ruby returned to have her stitches removed 2 weeks after the surgery.