The lymph nodes are part of the lymphatic system. They have several important functions regarding the immune system, and are good indicators of disease. The mammalian body has many internal lymph nodes. These can only be visualized by exploratory surgery, a CT scan, an MRI, a radiograph, or an ultrasound.

During a physical exam the external ones can be palpated to determine if they are enlarged. The medical term for enlarged external lymph nodes is lymphadenopathy. The lymph nodes are always examined as part of our routine head to tail (if they have one!) exam on all pets presented to us. 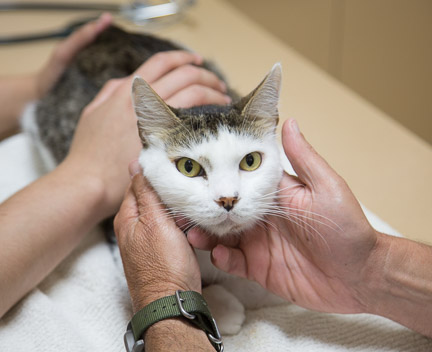 Dr. P is getting ready to perform a lymph node exam on this cat. He will start with the paired lymph nodes under the jaw, called the submandibular lymph nodes.

Lymph nodes can enlarge due to several reasons: 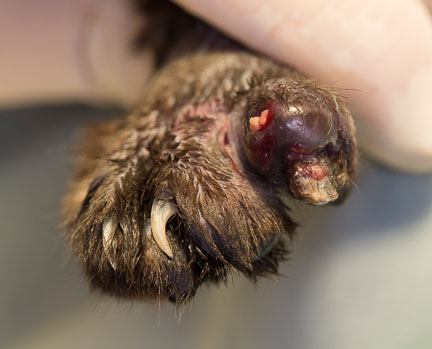 This badly infected toe on this cat could cause the regional lymph node, in this case it would be the axillary lymph node, to be enlarged. 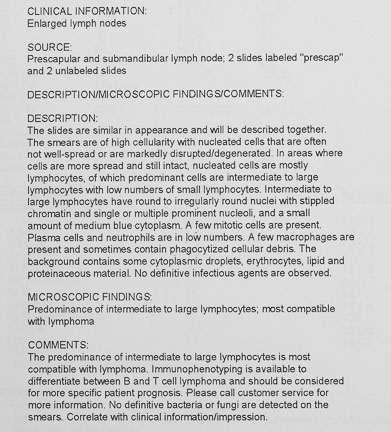 This is the report of a dog that has lymphoma

Numerous lymph nodes exist within the thoracic and abdominal cavities. They cannot be palpated, and their enlargement does not show up on routine blood samples. They might be seen on radiographs or ultrasound if they are significantly enlarged. 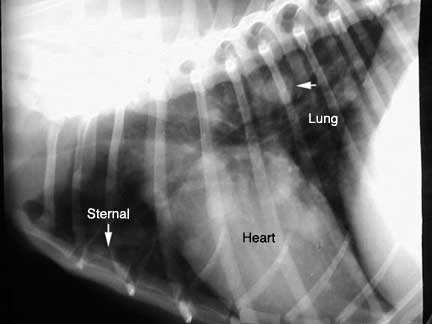 This radiograph of the chest shows the heart and lungs clearly. The lower arrow points to the location of the sternal lymph node. It is barely visible in this dog because it is normal. The top arrow points to a round, white structure. It is a tumor nodule that has spread from cancer elsewhere in body. 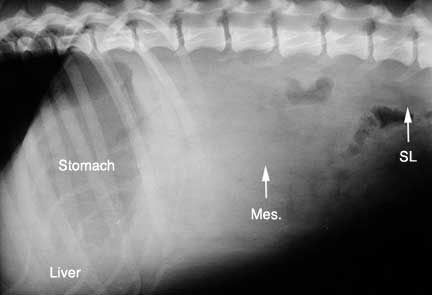 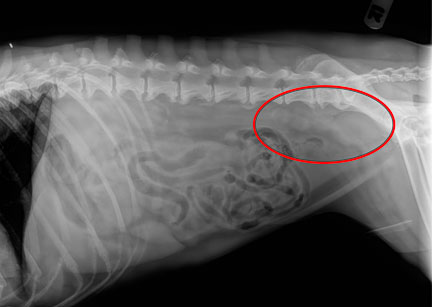 The greatly enlarged sublumbar lymph nodes are circled in this dog with cancer. See the close up below 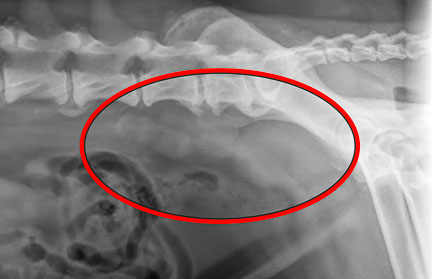 The enlarged sublumbar lymph nodes are visible as the whitish areas under the red circle. This is from a dog with a cancer called adenocarcinoma.

Lymph nodes can also be seen with the ultrasound. This takes an experienced veterinarian, usually a veterinary radiologist. 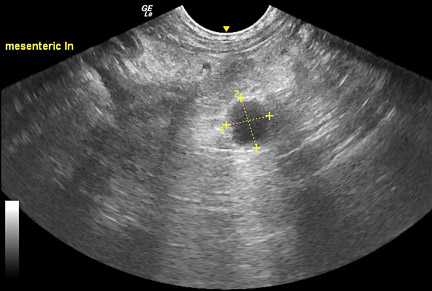 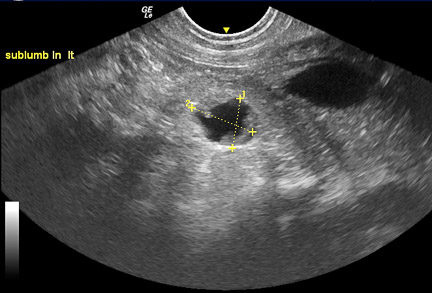 This is a lymph node at the back of the abdomen just under the spine called the sub lumbar lymph node. It is the same lymph node as the dog above. 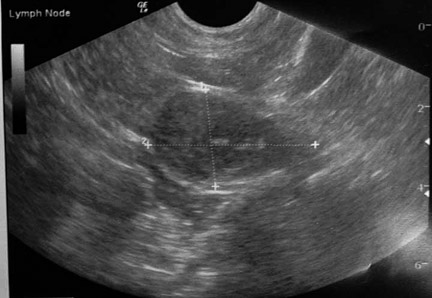 Enlarged lymph nodes can be found when performing an exploratory surgery. 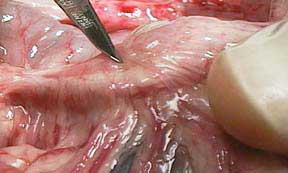 The scalpel blade is pointing to the mesenteric lymph node. This node is found at the center of the small intestine loops. This one is enlarged because this cat has kidney cancer, which has spread to the mesenteric node. 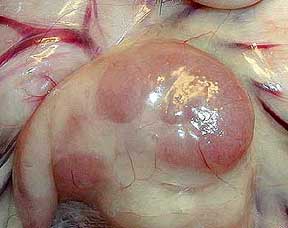 Mammals have numerous external lymph nodes (also called peripheral lymph nodes) that can be palpated during a physical examination. This is of great advantage because we can easily feel if they are enlarged without having to rely on diagnostic tests.

Reptiles and birds do not have these external lymph nodes, so they cannot be palpated during an exam. 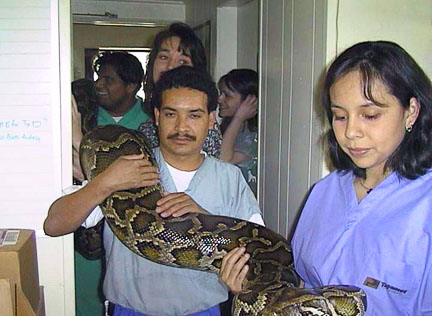 Good luck trying to palpate the external lymph nodes on this 120# python in for its yearly exam. The only thing you will find is how powerful it is as your assistants try to hold it still for an exam.

The tonsils are lymph nodes also, but they are not palpated, just looked at during our routine exam. We do not recommend that you check them yourself because they are deep in the oral cavity, and can be confused with the organs. Also, you can injury your pet while opening the mouth wide enough to see them, or you can be injured by a bite or scratch from your pet. If you think there is something wrong with your pet’s mouth it should be brought to us for a proper and thorough exam.

Five external lymph nodes are routinely palpated during a physical exam. All of them are paired, which is another advantage because we can compare one to another and notice subtle changes in size. We will teach you how to palpate them during our exam.

This test is a relatively simple way to obtain a significant amount of information from an enlarged lymph node. In this test we use a small needle (similar to the one we use to give vaccines) and gently insert it into the enlarged lymph node. We aspirate some of the lymph node material and put it on a microscope slide. 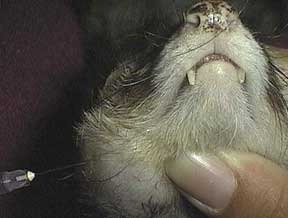 This ferret has a very large right submandibular lymph node. Do you see the needle on the left side of the picture that we are using to obtain the aspirate sample? It is super sharp, and is no more uncomfortable than getting a vaccine. 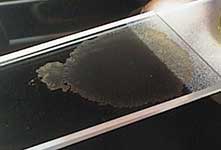 The aspirated material is put on a microscope slide for analysis by a pathologist. They will put special stains on the material and carefully scrutinize it under the microscope.

The fine needle aspirate test is not infallible at finding a problem. When the needle is inserted it is put in only by feel. It is possible for the lymph node to have a problem area that the needle missed. Also, we are giving the pathologist only a very small sample to read. It can be difficult to determine the health of the whole lymph node when only a small sample is taken.
Due to these limitations the pathologist sometimes cannot say for certain what caused the lymph node to enlarge. If it comes back inconclusive then we might keep the lymph node under close observation. If there are other changes in the rest of the physical exam, or laboratory data indicates there might be a significant problem, we will remove the whole lymph node and submit it for analysis.
If the fine needle aspirate report comes back that cancer is suspected we will remove the lymph node, no matter what the other laboratory tests indicate. You saw that earlier when we showed you the report of a dog with lymphoma.

The most accurate way to determine if a lymph node is seriously diseased is to remove the whole lymph node and submit it for analysis. It gives us significantly more information than the fine needle aspirate. It requires anesthesia and a small incision in the skin. We routinely use our laser for skin incisions for its great ability to minimize bleeding, swelling, and post-operative pain. 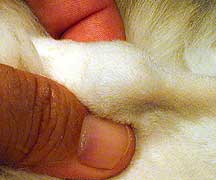 This cat has an enlarged popliteal lymph node 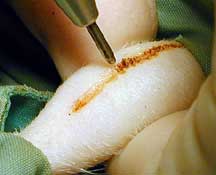 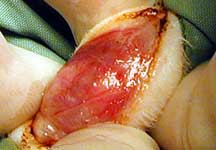 The inflamed lymph node is easily visualized. Note the lack of bleeding due to the laser cauterizing the blood vessels.

The anatomy of this lymph node is not normal. It is nodular and inflamed,  an indication that it is diseased. 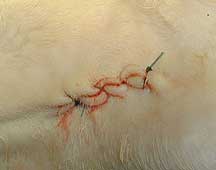 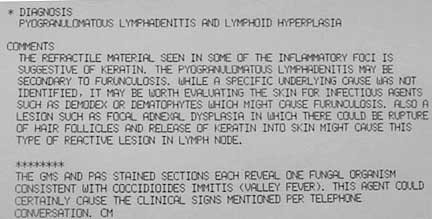 The report on this dog gave us a diagnosis of valley fever, which is a fungal infection. You don’t have to read through all of the medical mumbo jumbo to get to the valley fever diagnosis at the end. In the last paragraph you can see that special stains were needed to make the final diagnosis. These special stains are not easily performed on a fine needle aspirate.

This report of cancer came back on a Labrador Retriever

Inflamed lymph nodes are treated with an anti-inflammatory like cortisone. Pets with bacterial or fungal infections are treated with antibiotics or anti-fungal medications. There is no specific treatment for a lymph node that is enlarged due to a viral infection. If cancer is the cause of the enlargement it will be treated with surgery, chemotherapy, radiation, or a combination of all of these.
Return to Diseases Page