Sarcoptic mange (cats get a version called notoedric mange ), commonly know as scabies, is caused by an external parasite called Sarcoptes scabei  that burrows deep into the skin. It commonly occurs in dogs, not so commonly in cats, unless is it notoedric mange), also occurs in foxes, ferrets, rabbits, sheep, goats, cattle, pigs and guinea pigs.


It is contagious to other pets and occurs in many different animals. It causes intense itchiness, especially affecting the ear margins, elbows, and face. People can pick up this disease from their pet and show symptoms of itching, but it goes away by itself in many cases and usually  does not require treatment in most cases (always check with your doctor).

It is important to note that the diagnosis of this skin condition, like most skin conditions, cannot be made just by looking at a pet. Diagnostic tests are mandatory to arrive at a correct diagnosis and achieve a satisfactory outcome to therapy. Stating that an animal looks “mangey” is not the same thing as making a positive diagnosis of mange. Pets that have Ringworm , Demodex. and allergies can look like they have Sarcoptic mange.

This ectoparasite spends it life cycle of 14-21 days entirely on the host it has infected.  Overcrowded conditions increase risk for transmission. Stress from many sources can also be a factor.

The following history for an itching pet with sarcoptes usually involves:

In dogs most of the symptoms involve intense itching at the ear margins, elbows, hocks and abdomen. Less common areas of itching can include the face and feet. This itching will inflame the skin and cause scabs, with a secondary bacterial infection (pyoderma) occurring due to the trauma. Some pets will shake their ears excessively and cause an aural hematoma (swollen ear). These symptoms can mimic those of other skin conditions, so the rules of the diagnostic process should be carefully adhered to.

In cats, sarcoptic mange is caused by a mite called notoedres cati, a microscopic ectoparasite that burrows in to the skin. It is not as itchy, and occurs more often on the face, ears, paws, and tail. 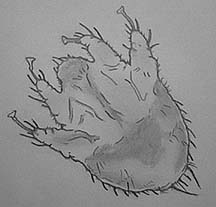 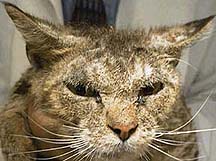 This cat has scabies, but you can’t say that for sure just by looking at it 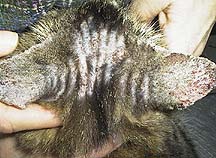 The top of his head shows how irritating the problem is, especially at the ears

The primary way to diagnose sarcoptic mange is to do a skin scraping where the patches of alopecia occur. Finding these mites, their eggs, or their feces,  under the microscope can be very difficult in this disease. a pet that has the symptoms of Sarcoptic mange and is negative on skin scrapings for the parasite can still have the disease. In these cases we commonly treat for the disease anyway, because the treatment is highly effective.

In rare cases we will do a skin biopsy, which is a great way to rule out other diseases that have similar symptoms.
Other diseases in dogs that mimic scabies include:

Diseases in cats that mimic scabies include:

The usual treatment for Sarcoptic mange is a drug called Ivermectin. It is an injection given weekly for up to 6 weeks. Most pets decrease their scratching rapidly after the first injection. Some dogs, particularly Collies, Shetland Sheepdogs, and Old English Sheepdogs, do not tolerate the medication well. In these pets we use a dip called Lyme Sulfur that is also very effective.

The disadvantage to the dip is the odor it causes and the staining of white coated animals. All pets in a household should be treated regardless of whether they are showing symptoms or not. Pets that have secondary skin infections from the trauma might also be put on antibiotics. Other common treatments include Revolution (selamectin) topical.

Other pets in the same household are commonly treated if they are in close contact. Treating the environment is usually not needed if all pets in the house are treated.

Some pets itch more in the first few days of treatment due to dying mites. These pets can be put on low dose cortisone for a few days in a reducing dose to get over this phase. 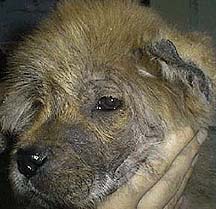 This dog has scabies

Good nutrition and plenty of play and exercise are always important to maintain the proper balance to fight off disease. All pets in a household that has a pet diagnosed with this disease should also be treated.