Mange in Guinea Pigs is caused by a parasite that is similar to the scabies parasite in people. It is seen more often in households that have several pigs. This disease occurs in other animals also, including dogs and cats.

Mange is caused by a parasite know as Sarcoptes. It is transmitted by direct contact, usually when a new pig that has the mite is introduced with pets already in your household. The mites that cause mange in guinea pigs does not affect humans.

Most Guinea Pigs that have Mange are itching and have patches of hair loss. Some even lose weight and have unhealthy looking hair coats. 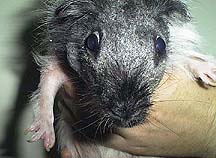 This pig has a patch of hair missing on his backside. He also has infected skin secondary to the scratching. 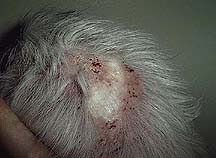 Any pig that has hair loss and is scratching is a suspect for Mange. The primary method of diagnosis is with a skin scraping.

The usual treatment for Mange is a drug called Ivermectin. Usually 2-3 injections are given between 1-2 weeks apart.