Some of the photons emitted are emitted along the axis of the laser tube. They bounce back and forth between mirrors that are at each end of the laser tube. When an excited carbon dioxide molecule is struck by a photon flying between mirrors it is stimulated to emit a photon that is identical to the stimulating photon. This is the Stimulated Emission. The original and newly admitted photons continue to stimulate the production of more photons resulting in an amplification of Light. Some of these photons are allowed to escape through a special transmissive mirror. Those that escape create the laser beam. 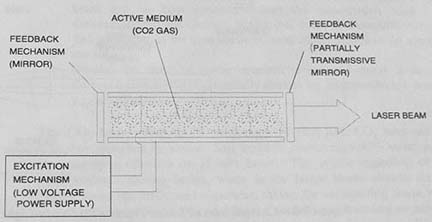 Lasers of different wavelengths produce different effects on tissues. CO2, Nd:YAG, diode, and argon lasers cause tissue to heat up. The wavelength of the laser determines the absorption into various structures such as h20, melanin, and hemoglobin, etc. Several things happen in general when light from these these types of lasers strikes tissue:

Due to its wavelength of 10.6 micrometers, CO2 laser energy is efficiently absorbed by water. Soft tissue is greater than 90% water, so it is effective on all soft tissue, whether the tissue is pigmented or not. Because of decreased water content in bones and teeth this laser is not used on these structures. During lasing, water in the target tissue absorbs the laser energy, heats up, boils, and vaporizes, taking the surrounding tissue with it. Because energy absorption is so efficient with the CO2 laser on soft tissue that energy penetrates no more than 0.1mm beyond the cut, regardless of the cut depth. The zone of necrosis and thermal injury under the cut is only 0.5 mm in depth. This allows precise control by the surgeon.

With a wavelength of 1064 nM, Nd:YAG laser energy is less efficiently absorbed by water and more readily absorbed by other materials such as the hemoglobin in red blood cells. The energy penetrates further into the soft tissue (up to 4 mm) before being absorbed. Because the energy is diffused into a larger volume of tissue compared to the CO2 laser, cutting is less efficient and the zones of necrosis and thermal injury are larger. This may be beneficial when removing a tumor deep in the body. By intentionally cooking it the tumor is destroyed. The absorption efficiency is dependent on the pigmentation of the tissue.

The real advantage of these wavelengths is that they are delivered through a glass fiber, therefore they can be passed through an endoscope. Even though they can’t cut as good as a CO2 laser they are able reach areas the CO2 laser can’t.

The relative effect of the CO2 and Nd:YAG lasers on tissue. Note the large depth of cut and smaller zone of necrosis of the CO2 laser compared to the Nd:YAG. More necrosis means better control of bleeding, but too much increases healing time. The CO2 laser provides a nice balance for general incisional work.

This is the power delivered per unit area, expressed usually as watts per square centimeter. Power density depends on the set power, the spot size, and the distance of the tip from tissue.

The spot size is the diameter (in mm) of the aperture containing 86% of the total power of the laser beam. If the power is held constant, a larger spot size produces s smaller relative impact on tissue than a smaller spot size, because the power is spread over a larger area.

There are two factors which determine the spot size of the hollow waveguide delivered CO2 laser on target tissue:

Rated spot size for the tip in use

This is what a 0.4 mm tip looks like at when attached to the hand piece.

Distance of the tip from the tissue target

This diagram shows the effect of tip size and target distance on tissue spot size. 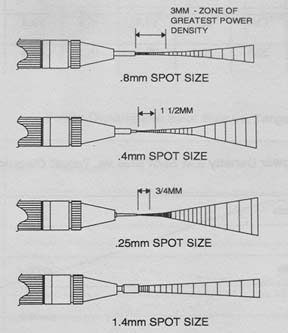 In the LX-20LP laser power is generated as a continuous wave:

The arrow points to the three different exposure settings on the machine. The top is single exposure, the middle is repeat, and the bottom is continuous. This machine is set at 6 watts of power and 40% program (it is ON 40% of the time). 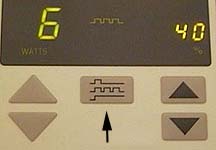 To cut or incise tissue focus the beam and use the tip at its nominally rated spot size ( 1/2 to 3 mm from the target tissue). Power and time determine the depth of cut. In general, use 6 watts of continuous exposure, or for better control, repeat exposure with a high duty cycle (40% program). Use a 0.25 or 0.4 mm spot size tip.

To vaporize you can use a focused or defocused beam depending on the amount of tissue to be removed and the precision required. In general, use a low power setting (4-10 watts) and continuous exposure, or a higher power setting in repeat exposure. Ablate the tissue layer by layer with a sweeping motion and wipe away the char after each layer. Char absorbs CO2 laser energy and will overheat the underlying tissue. It is possible to sculpt contours, an advantage over the scalpel.

For hemostasis use 3 watts continuous exposure, defocused (pull the tip back 4-12 mm from target tissue). Use a 0.8 mm spot size tip and lase the vessel, not the pool of blood. Lasing is effective on vessels that are less than 0.5 mm diameter.

A laser is a high energy beam of infrared radiation in the form of light waves that poses potential health hazards to patients, operators, and bystanders. It is imperative that safety procedures are followed. Wet gauze provides an effective safety backstop for CO2 lasers because the energy is absorbed into the water.

Hazards associated With Laser Use

Before the daily use of the laser a routine checklist should be followed:

Only personnel trained in laser safety are present. 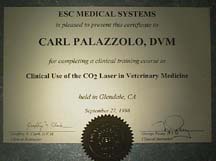 Safety goggles in use. 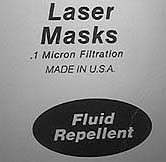 This is the operational end of our machine. You can see the on/off key at the top in the middle. The silver knob below it is the manual safety shutter. The red knob to the left of the safety shutter is the emergency shutoff switch.

On the main panel you can see the setting of 6 watts and 40% program. On the right side are the standby and ready switches. 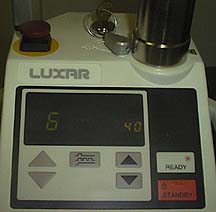