The liver is a multi-lobed organ that is located at the most forward part of the abdomen. It is so far forward that it lays up against the diaphragm, the muscle that aids in breathing in mammals (birds and reptiles do not have a diaphragm). This autopsy picture of a cat shows the gallbladder in green, with several lobes of the liver laying right up against the diaphragm (towards the top of the picture). On the other side of the diaphragm is the chest cavity containing the lungs and heart.

This close-up of the gallbladder and one of the lobes of the liver gives you a feel for what a normal liver lobe looks like in a cat. 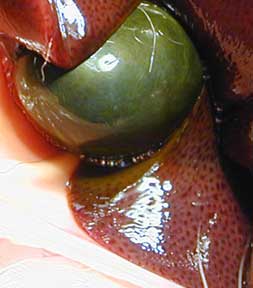 For fun comparison purposes, this is the gallbladder from an Iguana. It is also surrounded by liver lobes. Notice the difference in color from the cat liver above? 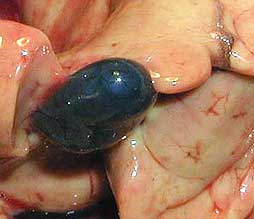 The liver is the largest organ that is located in the body, a testament to its importance. It has 6 distinct lobes organized into 3 regions. Like the kidneys, 25% of the blood ejected with each beat of the heart goes to the liver. Of tremendous significance is the fact that a healthy liver has great reserve power, using only a small amount of its full potential at any one time. Unfortunately, this great reserve power means that diseases that affect the liver can be well entrenched and not show symptoms of disease before a diagnosis is made. This obviously makes the prognosis worse. The liver does have an advantage though. Liver cells (hepatocytes) can regenerate themselves. This regenerative ability allows a diseased liver to return to normal function in some cases. Very few organs in the body have this ability.
The liver is supplied with nutrients from the hepatic artery and the portal vein, which is different from other internal organs. Blood from the heart goes through the aorta and into the hepatic artery. The hepatic artery supplies a large amount of the oxygen and nutrients the hepatocytes use during metabolism. Approximately 1/3 of the blood that flows into the liver comes from this artery.
The other source of blood for the liver is the portal vein, supplying 2/3 of the blood that flows into the liver. The nutrients in the portal vein originate from the digestive tract, this time, not the heart, like the hepatic artery does. In essence, raw food that is absorbed from the intestines flows directly to the liver. This exposes the liver to toxins and bacteria, which are metabolized and detoxified by a normal liver before they leave the liver and enter the general circulation via the heart. This detoxification process protects other organs, particularly the brain, from bacteria and toxins that could injure brain cells. When this system fails, which happens in liver shunts, excess ammonia will build up in the bloodstream and affect the brain. You will learn more about this when we discuss porto-systemic shunts later.

The extensive blood supply to the liver is apparent in this picture. The large blue vessels are part of the portal vein. 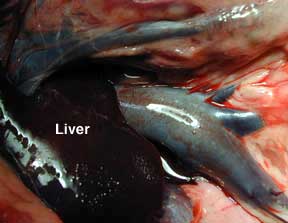 At the cellular level the liver has a basic functional unit call the acinus. This consists of hepatic sinusoids (areas of blood pooling), liver cells (hepatocytes), central vein and the portal triad. Blood from the portal triad flows into the hepatic sinusoids that surround the hepatocytes. This blood then exits through the central vein and back into the general circulation.

The biliary system consists of the gallbladder, bile ductules, hepatic ducts, and the common bile duct.
The gallbladder is located between two of the liver lobes. It stores bile that is made by the liver, and secretes this bile through the common bile duct into the beginning of the small intestine (duodenum). The bile that is secreted into the duodenum aids in the digestion of many compounds, especially fat.

This is a picture of a greatly enlarged gall bladder and common bile duct in a cat. 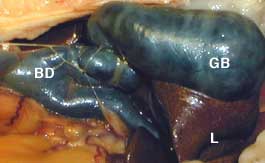 This “inside” lining view of the small intestine gives you a great view of bile as it is being secreted from the gall bladder into the duodenum. 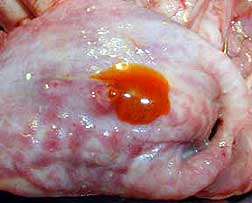