It is an understatement to say that the liver is an important organ. Every second the liver cells go through thousands of complex biochemical interactions that influence all of the other organs in the body. Its complexity precludes us from discussing all of its functions, so we will limit the physiology section to some of its more important functions.

The liver has reserve functional power and can operate effectively when most of the hepatocytes are not working well. In addition, diseased hepatocytes can actually regenerate and return to normal function.

The liver is the organ that orchestrates the metabolism of fats, carbohydrates, and protein. It does this in conjunction with the circulatory system, the lymphatic system, and the endocrine (hormone) system. A healthy liver is critical to proper protein, carbohydrate, and fat metabolism.

The liver produces all of the proteins except for the proteins synthesized by the immune system (called gammaglobulins or immunoglobulins). It does this by reassembling amino acids into protein. The main protein produced by the liver is called albumin.

Normal albumin in the bloodstream is important for many physiologic functions. One of these functions involves the normal maintenance of fluid pressure in the arteries and veins. When the protein level falls below a certain point the fluid in these vessels can leak out and pool in the abdominal or thoracic cavities. 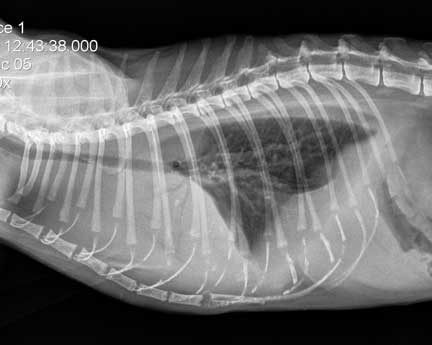 This is what pleural effusion looks like on a radiograph of a cat’s chest. Compare it to the normal one below and see if you can tell the difference. 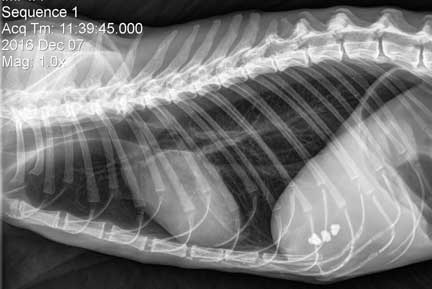 A normal cat thorax, although it does have two gallstones in the gallbladder

A consistent finding with liver disease is a low protein level (hypoproteinemia). This low level usually occurs only when the liver has been severely diseased for a prolonged period of time, because of the great reserve capacity of the liver to produce more albumin.

This pet has a low protein and albumin level

Glucose that is stored in hepatocytes is called glycogen. It is used as a reservoir during times when carbohydrate intake is low (fasting or starvation). The liver can also manufacture glucose from proteins or fats.

In liver disease the body can have a difficult time regulating the blood glucose level, usually leading to hypoglycemia (low blood glucose). This is one of the reasons why caloric intake is an important aspect of treatment.

The liver regulates fats (called fatty acids) in the bloodstream. It does this by converting excess amounts of carbohydrates and proteins into fatty acids. The liver also manufactures cholesterol from this fat. Cholesterol is necessary for many functions, particularly the sex hormones and steroids like cortisone. Excess fatty acid accumulation in the hepatocytes is called lipidosis. This is a disease that occurs mainly in cats, which you will learn more about later.

Drug detoxification is an important liver function. It is a complex process that occurs in the endoplasmic reticulum of the hepatocyte. Several phases are involved with this detoxification:

An example is the conversion of prednisone, an inactive compound, to prednisolone, and active form of cortisone. The drug is converted from an active drug to an active metabolite. A great example of this is antifreeze poisoning (ethylene oxide).

In this phase biochemical processes occur that make these drugs more water soluble and thus easier to eliminate through the kidneys. They are excreted out of the body in the urine.

Another example of this detoxification process occurs with the compound ammonia. ammonia is one of the by-products of the digestion and metabolism of protein into amino acids. Ammonia is detoxified by the liver into a compound called urea., which is excreted by the kidneys.

A diseased liver will not metabolize this ammonia to urea properly, leading to the disease called hepatic encephalopathy. This disease is explained in more detail in our Liver Shunt page.

Bile is made up of electrolytes, cholesterol, bile acids, bilirubin, and globulins. It is produced by hepatocytes, secreted by hepatocytes into channels in the liver called bile cannaliculi, and stored in the gall bladder. Drugs are eliminated in the bile, red blood cell are recirculated through the bile system, and fats are absorbed from the intestines into the bloodstream only in the presence of bile.

When red blood cells break down and are recycled they release bilirubin from their hemoglobin. The liver, along with spleen and bone marrow, recycle this bilirubin, salvaging some of the compounds (iron) and excreting the rest in the bile. Bilirubin, which is toxic, binds to albumin and is detoxified and excreted. This is eventually excreted into the intestines and broken down by intestinal bacteria into urobilinogen, where it imparts the dark color to stool.

If this bilirubin cannot be excreted from the gallbladder (when there is an obstruction in the bile duct) there will be very light colored (acholic) stool. The excess amounts of bilirubin that build up in the bloodstream will cause icterus. Icterus is more commonly known as jaundice, the yellow discoloration of the skin and mucous membranes that can occur with liver disease.

We test for excess bilirubin with a bile acids test

The fat soluble vitamins, a, D, E, and K, require bile for proper absorption form the intestines. These vitamins are stored in the liver, and are converted to active compounds as the liver maintains normal physiology (homeostasis).

The proteins that initiate and maintain clotting of blood are synthesized by the liver. These proteins go through very complex biochemical processes to achieved this vital function. A diseased liver is unable to synthesize these proteins, leading to a potential bleeding problem. Vitamin K is also an essential component of these clotting mechanisms. When rat poison (warfarin poisoning) is ingested it interferes with the ability of vitamin K to perform this vital function.

This is a Coagulation Panel from a dog  that is normal

The liver removes old or damaged red blood cells from the circulation, and is involved with the storage of iron and the breakdown of hemoglobin. Because of this, chronic liver disease could cause anemia. The liver (along with the spleen), is a storage organ for blood. If these is a severe blood loss the liver expels this blood into the bloodstream to help make up for the loss.

Specific cells called Kupffer cells line the inside of the liver. These cells are part of the immune system. They eliminate and degrade the substances that are brought into the liver by the portal vein. Some of these substances are bacteria, toxins, nutrients, and chemicals.

A diseased liver will not filter these compounds normally, resulting in toxic accumulations of drugs, chemicals, or bacteria. Excess accumulation of bacteria in the bloodstream is called septicemia, and is one of the reasons that antibiotics are commonly used in liver disease.

Did you make it through the physiology section? If that seemed a little complex keep in mind we only glossed over a small fraction of liver physiology. You can spend a lifetime studying the liver and still not understand all of its physiology. 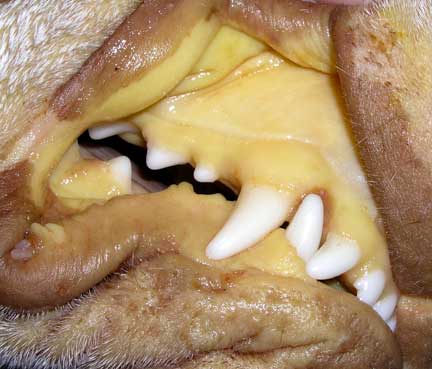 Icterus (jaundice) can have a pre-hepatic, hepatic, or post-hepatic cause:

Diseases that cause extensive red blood cell destruction (immune mediated hemolytic anemia, for example) can overload the liver’s ability to metabolize bilirubin. The liver is not diseased in this situation, it is just being overloaded with work to do. This is not to say there isn’t a problem because the anemia that causes this overload is a sign of a problem somewhere in the body. It usually takes a severe anemia to cause this problem.

Icterus can also be caused by impaired excretion of bilirubin in a diseased liver. These animals do not usually have a severe anemia, what they have is inflammation in the liver and biliary system. This swelling, known also as cholangiohepatitis, impairs the liver’s ability to excrete bilirubin in the digestive system. The bilirubin builds up and eventually spills over into the bloodstream, causing the yellow discoloration.

Obstruction of bilirubin flow out of the liver, which is a more extreme version of impaired excretion above, can also cause icterus. An obstruction of the gall bladder or common bile duct can cause this. These animals will have light colored feces because no bile pigment is being excreted into the digestive system to give stool its dark color. Bilirubin that is retained in the liver is toxic and will add to the liver problem that is already present.

This is an accumulation of fluid in the abdominal cavity. It is more common in dogs vs. cats when liver disease is the cause of ascites (heart disease, kidney disease, and abdominal tumors can cause it also).

Ascites due to liver disease occurs when there is impairment of blood flow through the portal vein. This impairment leads to increased blood pressure (hypertension) which causes fluid to leak out of the portal vein and into the abdomen. The low albumin level (hypoalbuminemia) that sometimes accompanies liver disease adds to this problem because albumin helps retain fluid inside the blood vessels.

Ascites is diagnosed by abdominal palpation, although in large pets it can be difficult to feel the fluid. You can see a fluid wave when you gently tap the abdomen of a pet with ascites. ascites is also diagnosed by radiography. In this situation the fluid obscures the normal organs like kidney and intestines.

There are other diseases that can cause abdominal enlargement and mimic ascites. These include obesity, pregnancy, urinary obstruction, enlarged spleen, uterus, or stomach.

This radiograph illustrates ascites. The fluid that has built up makes it difficult to distinguish individual organs. Emaciated animals with no body fat, or young animals with minimal abdominal fat accumulation, can look like they have ascites, when in reality they are perfectly normal.

Enlargement of the liver can be from several different causes:

Improper utilization of iron in the bone marrow, decreased appetite, and less nutrients from a liver with abnormal metabolism all can cause anemia. Gastric ulcers and clotting problems will cause bleeding and exacerbate anemia.

In severe liver disease or porto-systemic shunts the flow of blood through the liver is abnormal. This leads to a buildup of ammonia levels with a deleterious effect on the brain.

Our next step is to learn what can Cause Liver Disease