Pasteurella (snuffles) is a common cause of respiratory disease in rabbits. Most rabbits are exposed to it and harbor the organism that causes it. In can become a chronic problem that is difficult to control.

This disease and GI stasis are some of the more common problems we encounter in rabbits. Please also read our GI Stasis page also for an understanding of this problem and for proper diet for a rabbit.

This page contains graphic pictures of rabbits with severe infections- it might not be appropriate viewing for all ages.

The bacteria that causes this disease is called Pasteurella multocida. This bacteria has several strains that differ in their ability to cause problems. Most rabbits are exposed to this bacteria at some time in their lives. Some of them will show symptoms only when stressed. These carriers can spread the problem to other rabbits without any symptoms of their own. This can make control difficult.

Pasteurella is spread by mating, through general contact (especially respiratory), or through wounds from fighting.

Symptoms depend on the strength (virulence) of the specific Pasteurella strain involved, which body organ(s) are involved and how long the disease is present. One of the most common symptoms is respiratory, usually manifested as a nasal discharge.

When a rabbit wipes its front paws on its nose to remove the discharge the hair on the legs becomes matted. These are the symptoms that lead to the laymen’s name for this disease, snuffles. 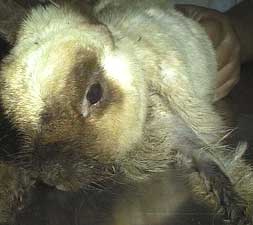 Other respiratory signs of Pasteurella include sneezing, congestion, and conjunctivitis. The tear ducts (lacrimal ducts) can become clogged with dried discharge, causing excess tearing and subsequent scalding of the skin around the eyes and face. 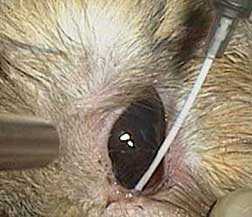 This is an example of how we flush the tear duct. They eye has been given a local anesthetic, and we are using a catheter to gently flush a saline solution into the tear duct.

In some cases Pasteurella can localize in the eye and cause complete loss of function. This eye has to be removed, since the rabbit cannot see, and it is painful. 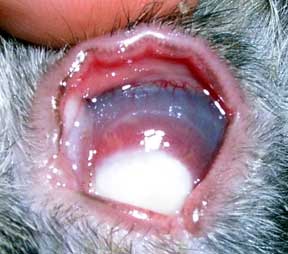 In addition to the respiratory tract, the bacteria can also infect the reproductive tract, the sinuses, the eyes, the ears, and the internal organs. It sometimes causes abscesses under the skin. These abscesses can become chronic and require surgery to correct. Severe cases can cause central nervous system symptoms like oscillations of the eyes (nystagmus), circling to one side, and severe tilting (wry neck or torticollis) of the head. 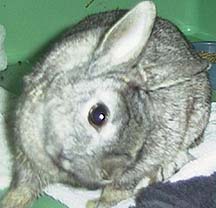 This rabbit has a neurologic problem from Pasteurella

Rabbits with ear infections might paw at the ears and those with internal organ infections might have poor appetites and lose weight. If the reproductive tract is infected discharge is commonly noted.
The following sections contain graphic surgical pictures, and may not be appropriate for everyone. 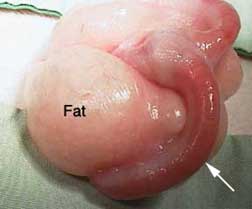 This is a healthy uterus during a routine spay (OVH). The healthy pink uterine horns are easily seen (white arrow). 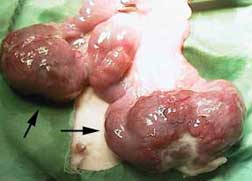 The arrows point to the typical appearance of a uterus infected with Pasteurella. Cancer can also look like this.

This problem is so prevalent, and the symptoms so characteristic, that Pasteurella is part of the tentative diagnosis anytime a rabbit shows the above symptoms.

During the physical exam a fever might be present along with an increase in the sounds heard in the lungs with the stethoscope. Cultures can be performed to confirm that Pasteurella Multocida is indeed present.

Rabbits with a negative culture result could still be harboring Pasteurella. Blood samples are commonly used along with x-rays. X-rays might show changes in the chest or infection in the middle ear. 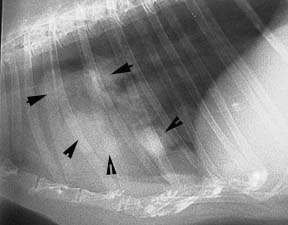 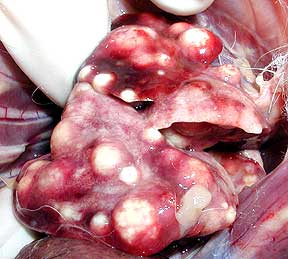 Most cases are treated with antibiotics. They sometimes need to be given for weeks or months. The majority of cases brought for treatment are chronic in nature. In these situations the bacteria has had time to become well entrenched, and there is no guarantee that antibiotics will work.

If they do work the problem can recur when the antibiotics are stopped. This emphasizes the need for routine exams in general (every 6-12 months), and a physical exam any time the above symptoms are noted.

Other medications are used if your pet is showing central nervous system or ocular symptoms. Pets that are circling or are wry necked might respond to oral medication to make them more comfortable. Plugged tear ducts are flushed and conjunctivitis is treated with antibiotic drops.

Abscesses are treated surgically. Rabbits have a very thick and tenacious discharge when they form an abscess, and require more care than the abscesses of most other animals. Surgical removal can be difficult, especially in the chronic cases, because the abscessed area can become extensive in nature. Multiple surgeries might be needed, and wound care at home is necessary. 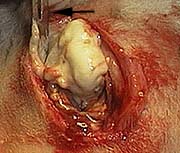 This is a severe abscess on the back of a rabbit that has been anesthetized and is undergoing surgery to correct its problem. The wound has just been opened by the scalpel blade at the top left of the screen (arrow).

The wound is filled with pus (the correct word is purulent) that must be completely removed. Any infection that is not removed will cause the abscess to return. It is very thick and does not lend itself to easy removal. 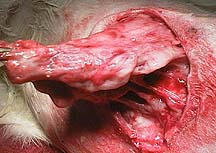 The underlying tissue that has been exposed to this infection has to be removed also. It is diseased and will be a source of further infection if it is not completely removed.

This is the final appearance of the wound after all the purulent material and diseased tissue has been removed after 30 minutes of surgery. The rubber tube (arrows) running from top to bottom is called a penrose drain tube. 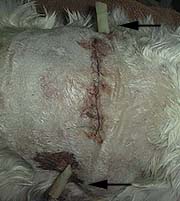 Some pasteurella abscesses are chronic in nature, and contain more dead tissue than purulent material. The following pictures show a case of a rabbit referred to us that had been treated with routine drainage and antibiotics for several weeks. The purulent material on the inside was diminished, but the tissue that remained was either dead or dying and had to be surgically removed. 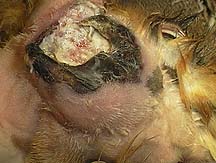 This is the face of the rabbit that is laying on its left side. Its mouth is towards the right. The abscess is the large circular area below and to the left of the eye. 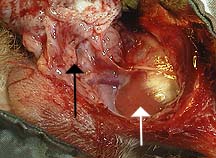 The diseased tissue (black arrow) is gently dissected away from the healthy tissue. The healthy jaw muscle (white arrow) is apparent .

The dissection has been completed. All that remains is healthy tissue that will be sutured back together. 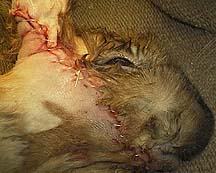 A large incision had to be made to remove all of this diseased tissue. It extends from the base of the ear all the way under the chin. These sutures will be removed in 10-14 days.

Most rabbits are exposed to this bacteria early in life. Determining which rabbits will develop symptoms of this problem is difficult. Minimizing stress (heat, overcrowding), proper diet (high in timothy hay, minimal pellets), a clean environment, fresh drinking water at all times, along with early neutering can help in minimizing the chance of this infection.