Maggots are the larvae of flies that hatch when flies lay eggs on an open wound. In the warmer climates, especially in the summer, we see this condition. It occurs when rabbits soil their fur, sometimes from diarrhea, and set up a moist environment that attracts flies.

A way to prevent diarrhea in rabbits is to feed minimal amounts of rabbit pellets. The majority of their diet should consist of timothy hay and timothy hay pellets.

The higher fiber content of these foods keeps their teeth worn down properly and aids in digestion, since they require a diet very high in fiber compared to other pets. 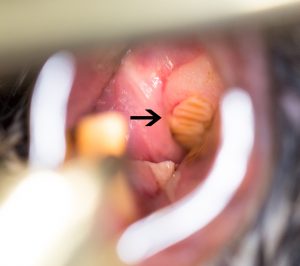 This rabbit was referred to us from another veterinarian. They initially cleaned up the wound, put the rabbit on oral antibiotics, and put stainless steel staples in the skin to suture the open wound that was present. This is the way we typically handle most wounds.

Unfortunately, some rabbits don’t respond to this suturing, especially if it is not done immediately. As a result the wound can fester under the sutures and become a serious infection.

Rabbit pus is tenacious and does not easily drain from the body like other mammals. As a result, it is difficult to work on these infections in the normal manner. 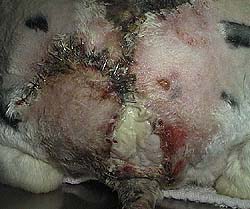 You can visualize the Y shaped staples that are holding the skin together at the top. They are not holding at the bottom. The white material at the bottom where the incision is open is the tenacious pus that rabbits get when there is an infection. 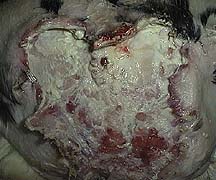 This is the wound immediately after we removed the staples and removed the dead tissue along with infection. It is impossible to remove all the infection that is present due to the tenacious nature of rabbit pus.

A special wound healing agent containing collagen was used to aid the healing process. It draws infection out of the contaminated area and sets up an environment for healthy tissue to start covering the opening. 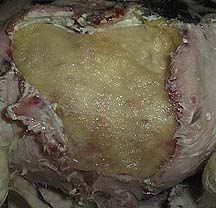 The wound is thoroughly covered with this collagen and allowed to stay on for several days initially. It was changed several times over the several weeks of therapy that was used in this case. 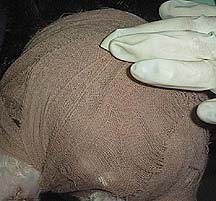 This rabbit healed fine, which is not always the case with such a serious wound. From the time he was brought in to us until this picture was taken was 5 weeks. 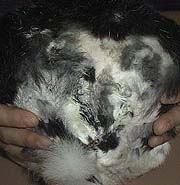 Here is Roger’s read end on his last recheck. He feels a lot better now that his fanny is not so exposed.