We will routinely use feeding tubes in tortoises that are not eating well even though some reptiles can go many days without eating. Sometimes they are not eating due to a traumatic injury or internal illness. Other times they might be recovering from surgery, either a bladder stone removal, or a removal of their eggs. This section will show you how we put a feeding tube into a California Desert Tortoise (CDT).

Graphic photos on this page. 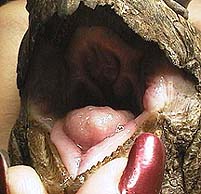 In reptiles the esophagus is found towards the right side of the neck. This is also true in birds, and the opposite of mammals. In this picture the tortoise is on its back and its head is towards the left. A hemostat has been passed through its oral cavity into the esophagus at the point where the feeding tube will be inserted. The arrow points to the hemostat as it bulges just under the skin. 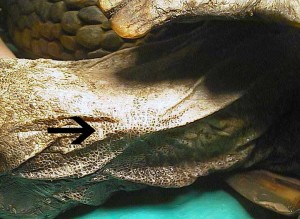 A nick is made in the skin with a scalpel blade right over the bulge. This allows the hemostat to gently advance through the wall of the esophagus and the skin to the outside. 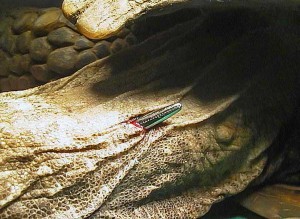 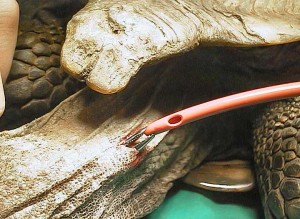 This view shows several things. Under the tip of the orange feeding tube you can see the breathing tube we use to administer anesthesia. You can also see the orange feeding tube passing into the esophagus in the upper right part of the picture and out through the mouth. We have taken off the hemostat that was used to pull it through so you can have better visualization. We will replace the hemostat on the tip of the tube and gently place the tip of the tube past the original incision we made in the esophagus. 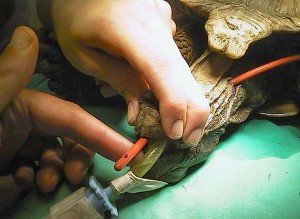 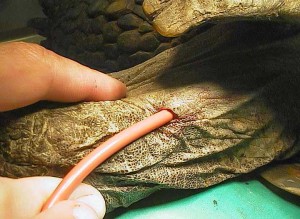 The tube is sutured at its insertion point into the esophagus and the remainder of the tube is taped to the top of the shell. The tube can be used to administer food, water, and medication for an extended period of time.

This closeup shows how we secure the tube 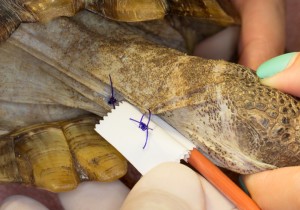 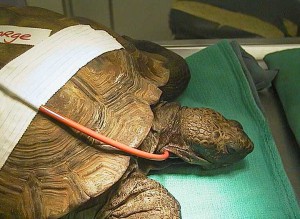 This x-ray of the tortoise on its back shows how the tub looks like on the inside. The arrow on the left actually shows the part of the tube that is taped to the top of the shell. The arrow towards the right shows the tube in the esophagus. 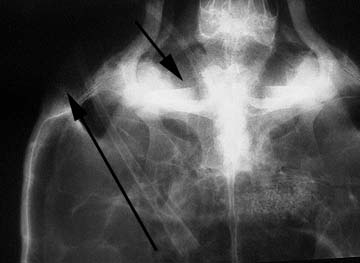