Snakes are frequently presented to us with scale conditions. In most cases there are obvious husbandry problems that caused the condition. It is imperative to know the proper temperature, humidity, and substrate necessary for optimum health for each species of snake.

Far too often we encounter problems that are easily corrected with only a little bit of effort on an owner’s part. Information on the proper environment for these animals is available through books, reptile associations, and the World Wide Web- ignorance of their needs is no excuse to house them in poor conditions.

Correcting scale conditions in snakes takes considerable time and effort. Many cases need antibiotics and care for at least one month. 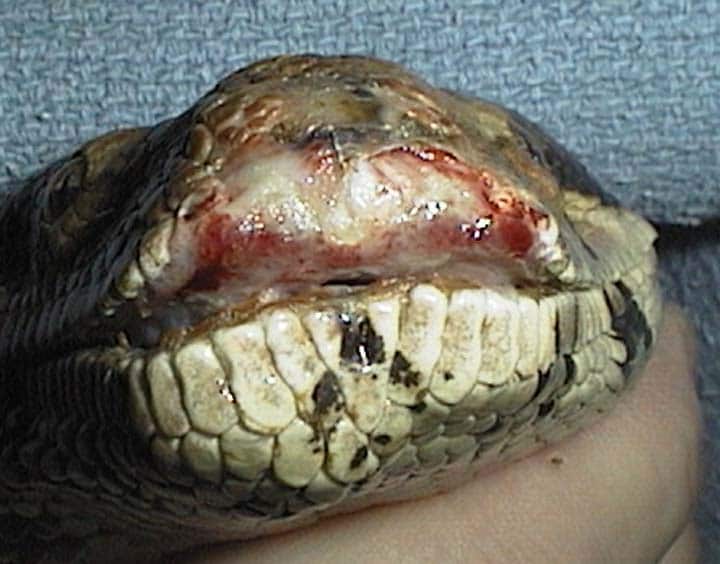 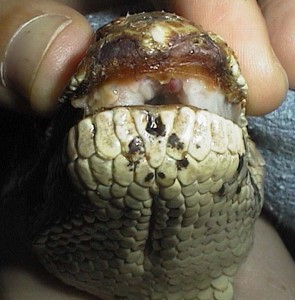 After we removed necrotic tissue it scabbed over and eventually healed

A thorough exam revealed problems in other locations. This is the underside at around mid body. This red area of inflammation is caused by septicemia, a spread of infection through the bloodstream to other parts of the body.

Other locations on this snake’s underside also had lesions.

Diagnostic tests were performed to assist us in diagnosis and treatment. We cultured the lesion in the mouth and took a blood sample. The blood sample told us the snake had no internal problems, and the culture told us what bacteria was involved and which antibiotics would work best. 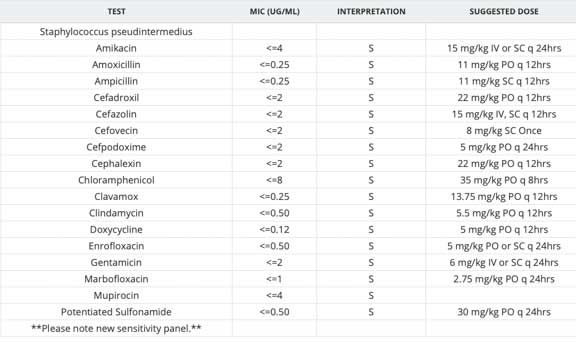 This is a picture of the same area as the above picture 2 weeks after we started treatment with one of the appropriate antibiotics from the above sensitivity report. This snake is now is eating on its own and the lesions in the mouth and scales are almost completely gone. It will be treated for an additional 2 weeks to prevent recurrence of the problem. The initial husbandry conditions that set up this infection were also corrected.

It is a common fallacy to think that snakes need to eat live prey. If a snake is not hungry, or if it is not kept at the proper temperature and humidity, then its stimulus to kill and eat live prey is diminished. A common outcome is the rat attacking the snake, leading to serious infection and often times death. All rats and mice fed to snakes should be killed before introduction to a snake. Stunned rodents can be used but should be removed if not eaten in a short period of time

This snake had been ill and off food for about one week before it was brought in to us. The owner was not aware that the rat he fed attacked the snake because he was not observant after he put the rat in the snake’s cage. In this picture the back 1/3rd of the scales were infected. 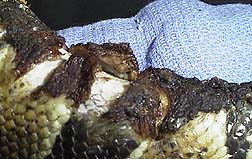 A close up view reveals the extent of the skin infection. This snake has septicemia also because the infection has spread from the scales into the bloodstream. This pet required extensive medical therapy to save it.

Many snakes are kept in cages with inadequate ambient heat. A common source of heat in many cages is a hot rock. When improperly used it can burn the snake

The underside of this Burmese python shows extensive burns. It is a serious condition that requires immediate care if this snake is to survive.

A close up view gives a better feeling for the severity of the problem.