Home•Handling Your Puppy
Previous Next

To prepare your puppy to be handled, restrained, and groomed throughout its life.

Tools you will need

One of the saddest things to see is a dog that is absolutely terrified of something as simple as a nail trim. I have seen dogs lose control of bodily functions, scream in terror, struggle violently, and bite and scratch in their frantic attempts to avoid having their nails trimmed. Some dogs have to be sedated or even anesthetized for this simple procedure.

Others go without nail trims, which might results in dangerously long nails that can get caught in carpeting and can also cause the dog to adopt an unnatural gait which can cause joint discomfort. It doesn’t have to be this way. All dogs will eventually have to be groomed, vaccinated, examined, restrained, etc., so it’s best to teach your dog, early in its life to, if not enjoy these procedures, to at least allow them to be carried out.

The following procedures apply equally to young and older dogs. A gradual process of desensitization to the equipment as well as the discomfort associated with many handling procedures will help your pup avoid the psychological trauma described above.

There are several things you should address in routine handling exercises throughout your dog’s life:

It is easiest to teach a young pup to cope with being restrained if you teach it at a very young age, e.g., 6-10 weeks of age. Older puppies will struggle more and have developed more strength and coordination to resist your efforts. Regardless, in no case should this procedure turn into a wrestling match or a test of who is “dominant.” It is a natural reaction for animals to resist being restrained. It is not a show of dominance! It’s scary to be restrained and fight they will since they are hard-wired to do so.

Start by getting some yummy treats handy 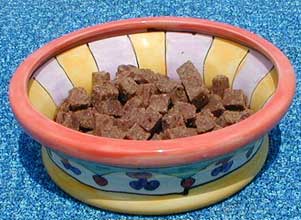 Hold your puppy comfortably in your lap. Gently place your hands over his/her shoulders with the heels of your hands on the top and your fingers wrapping around toward the chest. Briefly (no more than a second or two) apply a small amount of pressure, say “Yes!” for the puppy not reacting (if she/he reacts, you are using too much pressure or doing it for too long), and give the pup a treat and pet and praise him/her. Gradually build up until you can exert a little more pressure for longer periods of time without your pup resisting. Reward profusely each time.

When the puppy is accustomed to having his/her shoulders held, use the same gradual process to accustom the pup to:

Having his foot held 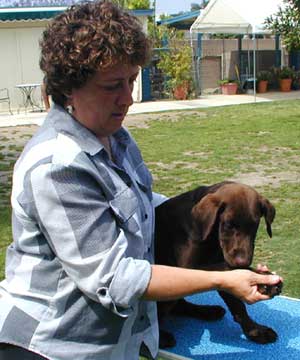 Having his leg (each one, one at a time) held 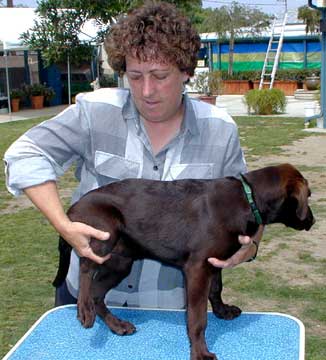 Having his shoulders held 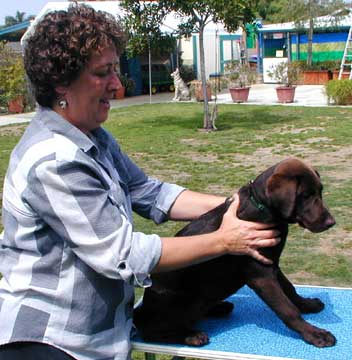 Having his hips held between your hands 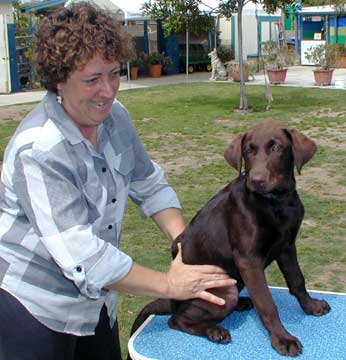 Having his head held between your hands 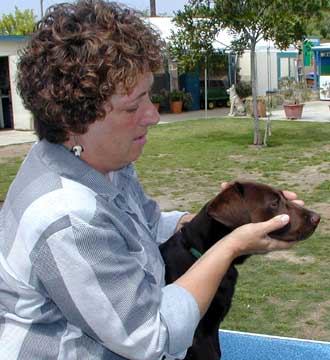 Having his entire body held (tucked against your side, with the front end held by your hand and the hips tucked in by your elbow) 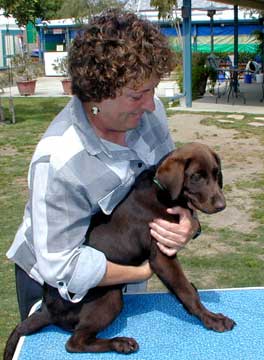 Having his head held in the crook of your arm (do this only if you have successfully performed all of the above, and be sure to keep your face away from your dog’s mouth) 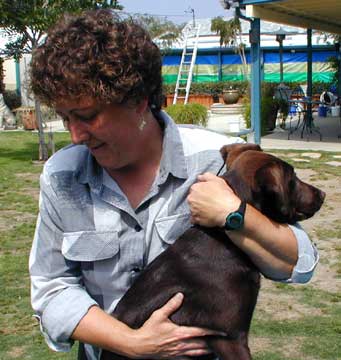 If your puppy fights, struggles, growls, or bites during the beginning stages of these exercises, obtain the services of a positive reinforcement trainer to help you. Practice these exercises with your growing puppy and throughout his/her life!

Physical Exams (including tolerance for discomfort/pain)

Accustom your pup to a variety of “mock examinations.”

Gently open your pup’s mouth an inch or so. Say “Yes!” for the puppy not reacting (if she/he reacts, you need to back up and just briefly touch the puppy’s lips or open the mouth less), and give the pup a treat and pet and praise him/her. Gradually build up until you can open the mouth wider, move your fingers around the lips, and gently press down on the tongue. 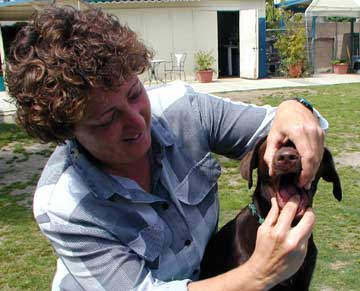 Reward profusely each time. One trick that works well after the puppy is accustomed to having you handle his lips and mouth is to open your pup’s mouth and press a treat down on his tongue for him to eat. Surprise!

Lift or touch the flap of one of the pup’s ears and gently and briefly touch the skin around the ear. 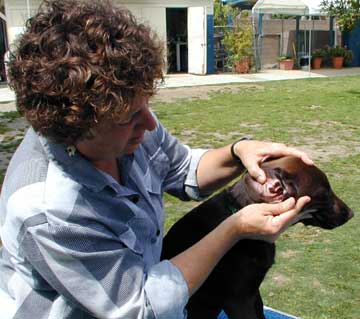 Say “Yes!” for the puppy not reacting, and give the pup a treat and pet and praise him/her. Gradually build up until you can touch all areas on the outside of the ear and eventually press a fingertip into the inside of the ear (don’t poke down into the ear canal; just the surface outside it). Reward profusely each time. Next, take a cotton ball or plain cotton pad (sold in stores as face cleansers), and gently wipe the ear flap and the area just outside the ear canal. Again, reward profusely each time!

Gently hold your pup’s paw in your hand and reward him/her for letting you hold it for longer and longer periods of time. 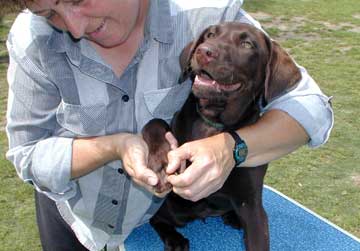 Gradually apply a little bit of pressure to the paw and think of what it looks like when you hold the paw while doing a nail trim. Make this process fun by feeding one of your pup’s favorite treats. Gradually build up to the point where you are touching each toe and exerting mild pressure on each toe to the point where the nail is lifted.

Many dogs dislike their feet being touched, so go slowly; this is the foundation of a nail trim and for checking between toes for those nasty foxtails (plant seeds that cause pain and abscesses).

Here is a great exercise developed by a very creative British trainer named John Rogerson. In separate handling exercises, accustom your pup to the sight and sound of the nail clippers by placing them on the floor for the puppy to sniff. 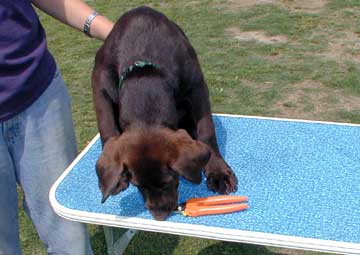 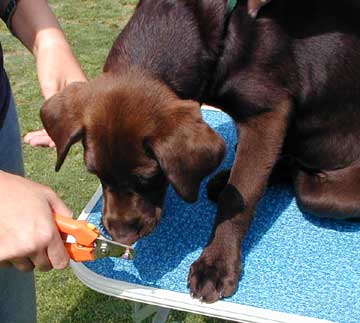 Take a wooden matchstick, and clip the matchstick into several pieces, tossing the pup a treat each time you clip. Clipping the matchstick sounds very similar to the sound made by trimming a dog’s nails! 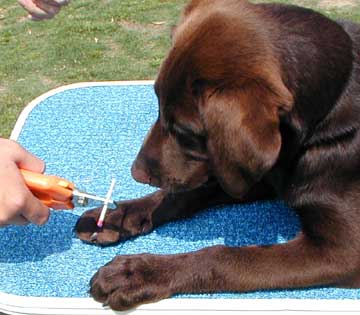 Only when your puppy thoroughly enjoys having his feet and toes handled and is accustomed to the sound of the clippers clipping the matchstick do you go to the next stage: fake clipping of the nails. Pick up the puppy’s foot and place a matchstick under the foot and clip the matchstick while it is in the same hand as the pup’s foot 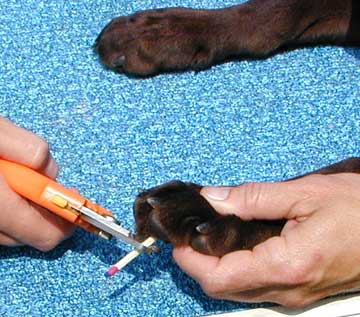 Reward, repeat, reward. When your puppy is used to this, trim the very tip only of one of the pup’s nails 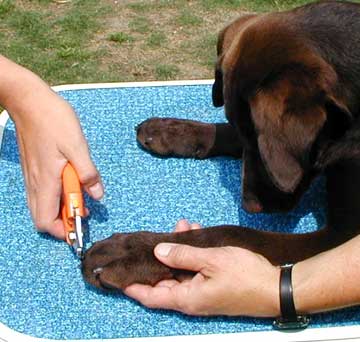 Reward profusely. Stop. Do additional nails in several other, separate sessions and only gradually build up until you can trim several nails in one session.

This may sound like a lengthy process; however, with daily sessions many dogs can be trained to tolerate nail trims in a very short period of time, i.e., a week or so. It’s worth the effort!

Practice this exercise only after you have completed Step 1, Restraint, above. Use gauze or cut an old t-shirt or sheet into strips about an inch or so wide and several inches long (this will vary depending upon whether you have a Papillon or a St. Bernard). Gently wrap a few inches of the cloth around your pup’s front leg or foot 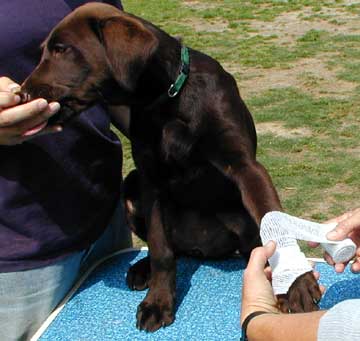 Reward frequently for not pulling the foot away or for grabbing the cloth. Make this a pleasant activity. (It is recommended that your do this exercise when your pup is relaxed or sleepy and not at his/her highest energy time of the day!) You may want to have a helper hold the pup while you do the wrapping. another variety of this exercise is to “dress” your pup in old t-shirts so that she/he gets used to having items placed on and around his/her body.

Note: Inappropriate use of bandaging can cause more harm than good. This exercise is to get your pup used to having bandaging material placed on its body only after supervision of your veterinarian.

Accustom your pup to all of the different tools used in grooming. This includes brushes, combs, scissors, and electric clippers. Place each item on the floor for the puppy to sniff

Reward for any curiosity or interaction with each item. Gradually build up to placing the brush in your hand and gently brushing.

It is especially important to get your pup used to the sound of electric clippers even if your dog will not be routinely groomed with them. Many veterinary procedures involve the use of them, and dogs are often afraid of the sound if they have never heard them before. Let the pup sniff them on the floor with the power off and give him/her treats for sniffing them. Next, hold them and reward the pup for sniffing them. Then, turn the power on (be sure to hold it a few feet away from the pup initially) and toss treats! 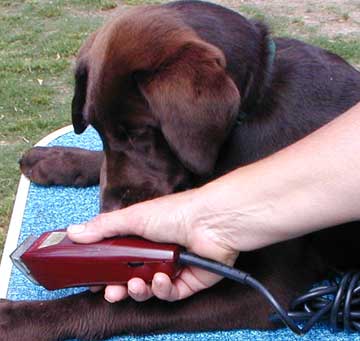 Gradually build up so you can have the clippers next to your pup’s body so she/he can feel the vibration. Congratulations! You’ve just acclimated your pup to something that has the potential for being pretty scary!

If you can get your pup to tolerate all of the exercises above, you can then try and teach him/her that brief discomfort and pain are also a part of life. Using the gradual desensitization procedures as you’ve used in the prior exercises, we will now teach your pup to tolerate discomfort. Again, with yummy treats handy, take a small fold of your pup’s skin between your fingers (on his/her back or between the shoulders).

Exert a small amount of pressure. Say “Yes!” and reward for not mouthing or struggling. If your pup does react, you have to take a step back and apply less pressure. Eventually, you want to be able to build the pup’s tolerance to a mild pinch. Think of how much easier it will be on the pup when she/he is vaccinated and always gets treats and praise for these brief moments of pain or discomfort!

The Perfect Puppy: How to Raise a Well-Behaved Dog by Gwen Bailey