To teach your pup basic manners that will make him/her welcome members of the human community.

Tools you will need 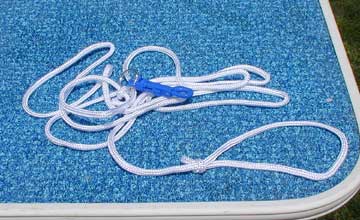 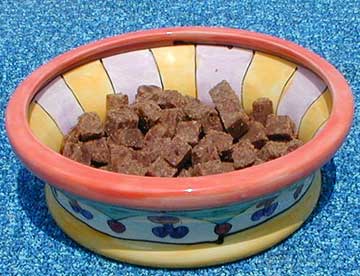 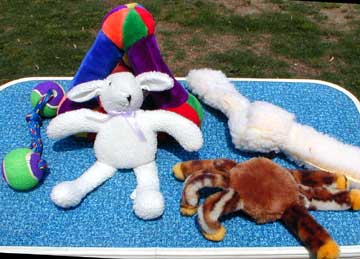 Many of us grew up thinking that dogs could not be trained until they were at least six months old. This belief was based upon the traditional, command-based training techniques that utilized choke chains and corrections.

With the more contemporary reward-based training techniques (lure/reward and clicker training), training can start much, much earlier and thus helps teach the pup the right behaviors from the start. The first six months of a dog’s life are an opportune time to set the foundation for lifelong skills and behaviors that will help cement a solid relationship between pup and human family members.

Puppy training should begin as soon as your bring your new puppy home! Many people are surprised to learn that pups as young as seven and eight weeks of age can begin learning “obedience” cues such as “Sit!” and “Down,” and that this is the best time to teach them other important behaviors such as no jumping, not to pull on the leash, and to learn to inhibit their mouthing and biting.

There are several basic behaviors to teach your pup, regardless of his/her age. Note that the training technique used to teach all these behaviors is based on “clicker training,” a teaching technique that uses a clicker or a verbal “marker” such as “Yes!” that tells the pup “Yes!”; what you did right thereis the behavior that is going to earn you a reward. 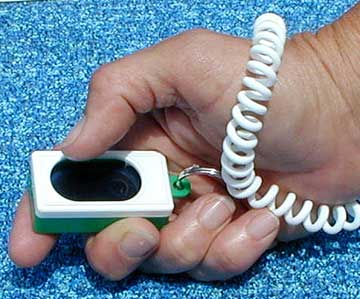 Clicker training waits to associate a cue or name to the behavior until after the pup understands the behavior itself. It does not use any physical modeling (pushing or pulling your pup). Dolphin trainers have used clicker training for over 30 years and by dog trainers for over to 10 years.

First, make sure your pup has a variety of toys (rope toys, balls, squeakies, etc.) to play with as a good alternative to chewing on you. When you see the pup running at you, pick up a toy and toss it to the pup, and praise him/her for chasing the toy instead. Never laugh and encourage your pup to chew your shoelaces. This may be cute as a puppy, but within a few days, you’ll discover it’s not so fun anymore! Instead, stand still, and toss a toy.

Second, when your pup mouths and bites you too hard, say “Ouch!” in a deep, firm voice, and get up and walk away. Repeat, repeat, repeat, until the pup understands that it is his/her biting that makes the playing end. If your pup runs after you and continues to jump and mouth you, here’s a great training solution: attach a length of cloth clothesline (about 8’ long) to your pup’s collar, and tether the other end to a piece of heavy furniture.

Play with your pup in the immediate area where he is tethered. as soon as he exerts too much jaw pressure, say “Ouch!” and walk away in a huff. He won’t be able to follow you and he won’t be able to just scamper off to something more interesting. He’ll be forced to have a brief timeout (two minutes) before you return to give him another chance to play appropriately.

Be patient! all puppies mouth and bite. That’s how they explore their world and how they would be playing with their litter mates, who would be teaching them all about bite inhibition. If you find that your pup is not responding to your “Ouch” and timeouts, it could be she/he is like an overtired toddler.

In that case, give your pup a break from all the activity by placing him/her in a quiet place with a stuffed Kong or tether him/her with the Kong, and try again later. 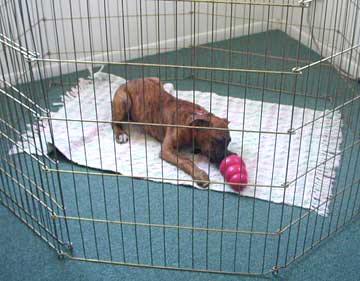 Do not (these are either ineffective, dangerous, and/or cruel):

Don’t punish. Teach instead. You are the teacher. The pup is your student. Be patient. Be kind.

First, don’t reinforce it! We often unwittingly reinforce jumping by letting very young pups jump all over us. When your pup jumps up on you, simply turn away. Then, turn back to your pup and lure him/her into a sit with a little treat, and give the treat as the reward for sitting instead of jumping. Never touch, talk to, or smile at a puppy who is jumping on you; those are all reinforcements for jumping!

Get some tasty treats. Some dogs like Cheerios, some like cheese or hot dogs. Some will work fine for regular kibble. Experiment to see what your dog likes and use the “lowest-value” treat you can get away with, reserving “high-value” treats for the tougher behaviors you’ll be teaching later.
Hold the treat just above your pup’s nose. 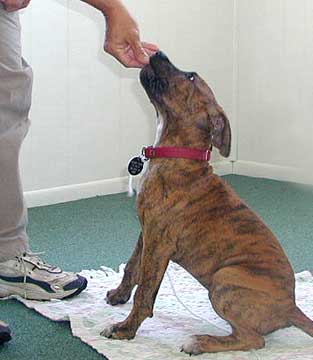 More than likely your pup will look up to see the treat. Move the treat back as your pup’s nose follows it. Kerplunk! Down goes his rear-end! Say “Yes!” to mark the right behavior, and then give him the treat. It’s a basic law of doggy physics that when the nose and head goes up and back, the rear-end goes down It’s that easy! No need to pull on your pup’s collar or push on his rear-end. Create a thinking dog by letting him decide to do what it takes to get that treat!

If your dog jumps up to grab at the treat, simply start over, making sure you are not raising the treat too far above his nose. This will make the pup want to jump up to grab it instead of having his rear-end hit the floor. Do this four or five times with the treat in your hand, and then lure him/her without any treat in your hand. You may be surprised to find that the pup will follow this new hand signal, and sit.

Move to different locations and repeat several times. When you pup clearly has the idea (many just start following you around and sitting without a hand signal), you are ready to add the cue, “Sit!” You do this by saying the word in a fun, upbeat voice, just as the pup starts to sit (or before, if you are good at predicting what your pup’s going to do).

It will now take between 30 and 50 repetitions of the new cue for the pup to associate it with the behavior he already knows. No, don’t do 30 sits in a row! Break it up and make it fun over several separate training sessions.

Be sure to take this new behavior “on the road” by asking him to sit in different parts of the house, the yard, the park, etc.

This works easiest from a sit. With a treat, lure your pup’s nose straight down between his front feet. When your pup reaches down to follow the treat, his/her elbows will bend. Don’t wait for the whole down. Say “Yes!” to mark the behavior you like, and give the treat. Gradually build up to the point where the elbows are touching the floor, say “Yes!” and treat. 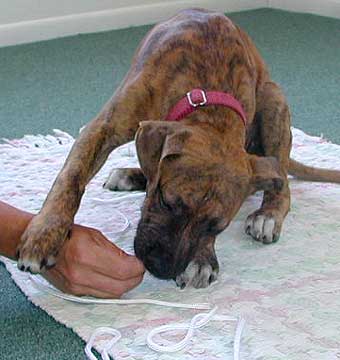 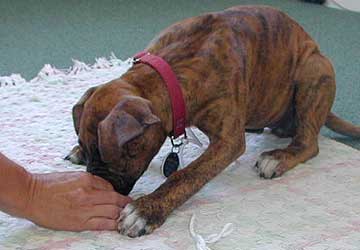 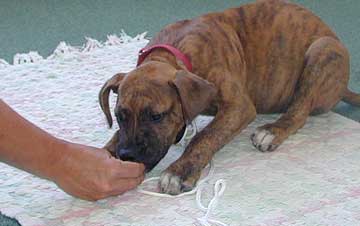 If your pup’s rear-end keeps popping up, simply start over, making sure you are not raising the treat too far forward in front of his feet instead of straight down. Just remove the treat and start over, shaping this behavior gradually by marking and treating each time his shoulders and elbows go lower and lower. He’ll get it eventually!

Just like above, when you have successfully lured him all the way down four or five times with the treat in your hand, try luring him/her without any treat in your hand. You may be surprised to find that the pup will follow this new hand signal, and go down.

Remember to move to different locations and repeat the new behavior several times. When your pup clearly has the idea, you are ready to add the cue, “Down!” You do this by saying the word in a fun, upbeat voice, just as the pup starts to go down (or before, if you are good at predicting what your pup’s going to do).

It will now take between 30 and 50 repetitions of the new cue for the pup to associate it with the behavior he already knows. No, don’t do 30 downs in a row! Break it up and make it fun over several separate training sessions.

Come (also excellent for teaching a new pup its name)

First, avoid using your pup’s name except when you want him/her to pay attention to you. Don’t use the pup’s name in casual conversation! When you do use the pup’s name, you should be just a couple of feet away at first. Excitedly say, “Fido!” and when your pup looks at you, say “Yes!” and hand him/her a treat and praise and pet profusely. Increase the distance slowly and only very gradually add distractions.

Never call the pup to you to be reprimanded, give a bath, or other unpleasant times. When you do call your pup, reward profusely by praising, petting, and giving him/her a special treat.

This exercise teaches a pup to let people grab his/her collar without mouthing, biting, or trying to run away. There will be a time in the pup’s life that you will need to quickly grab the collar. All dogs are “hard-wired” to spin around and grab anything that is grabbing its neck. We need to desensitize the pup to this to avoid children being bitten and to allow us to grab the dog in an emergency.

Get your treats handy. Sit in front of the pup, and reach toward him/her (don’t grab yet), and reward (“Yes!” and treat) when the pup doesn’t mouth or jump at your hand. If s/he does, repeat, but this time don’t reach as far toward the pup. Gradually build up to the point where you are able to reach all the way to the side of your pup’s head without any mouthing. This should be pretty easy once the pup figures out all s/he has to do to earn the treat is to let you reach toward him/her!

Clicker Training for Dog by Karen Pryor
Clicking with Your Dog … Step-by-Step in Pictures by Peggy Tilman
How to Teach an Old Dog New Tricks by Dr. Ian Dunbar (by the veterinary behaviorist who popularized early training and reward-based training; an excellent book on using lure/reward training for dogs of all ages)
The Perfect Puppy: How to Raise a Well-Behaved Dog by Gwen Bailey
Toolbox for Remodeling Your Problem Dog by Terry Ryan (Don’t be fooled by the title; this is an excellent resource for avoiding problem behaviors by teaching the right ones from the start.)