First things first, if you want to shoot a flying falcon you need a flying falcon. Dr. Palazzolo has a friend that is a licensed falconer. She has a wild falcon that was given to her when it was young because the parents were attacking it. She has been training it and will be releasing it soon.

This very fast flying bird is an ideal candidate to practice BIF photography. Hang on to your hats for this one, because it doesn’t get any faster than this in the natural world. A peregrine falcon on a dive can go up to 240 mph! On two separate occasions Dr. P had a chance to photograph this female falcon as it was flying around him preying upon pigeons.

Birds in flight is one of the most difficult photographic situations encountered in wildlife photography (or any photography for that matter). Birds fly very fast, faster than people realize. A bird that is flying at 40 mph, which is par for the course, is going almost 6o feet every second!

It usually takes one of the higher end DSLR cameras with regards to autofocus and frame rate to consistently get your BIF shots in focus and with the right pose. More important than that though, is to practice with whatever equipment you have.

Dr. P’s equipment are a Canon 1Dx Mark II camera with a Canon 400mm f/4 D.O. version II lens handheld. The aperture was kept at f/4 for all photos, and the ISO was at 400, giving a shutter speed that varied from 1/3000th of a second to 1/8000th of a second. The camera was set to manual mode, and all autofocus points were active in a custom setting for flying birds. 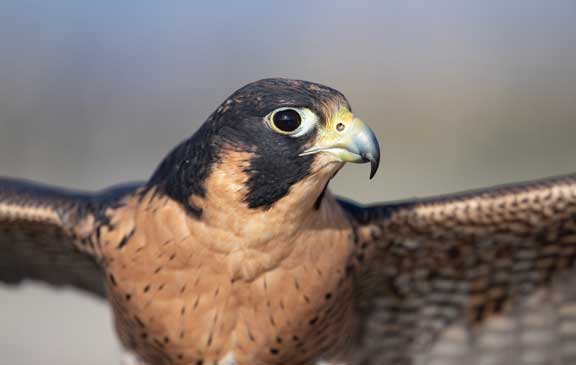 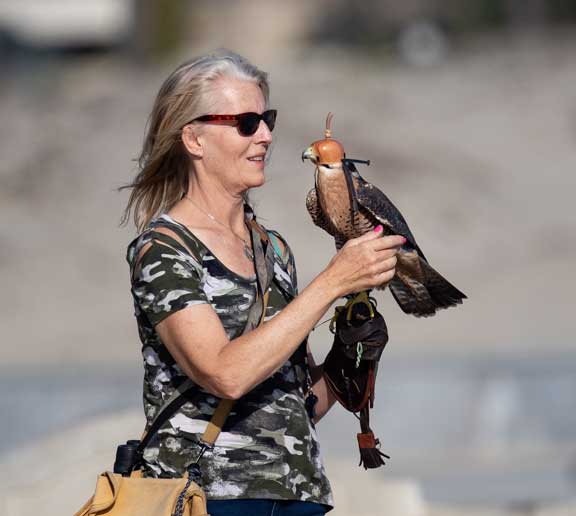 The falcon is always transported hooded to keep it calm. Once we got to the beach the hood comes off, although it cannot fly away because of the jesses being held by the falconer. 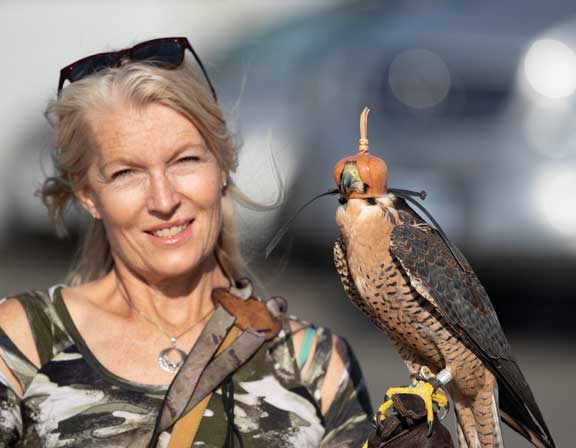 The falcon has not been fed, so its senses are keen and it is ready to hunt. You can tell by the way it moves its head, even though it is hooded, that it is primed to go. 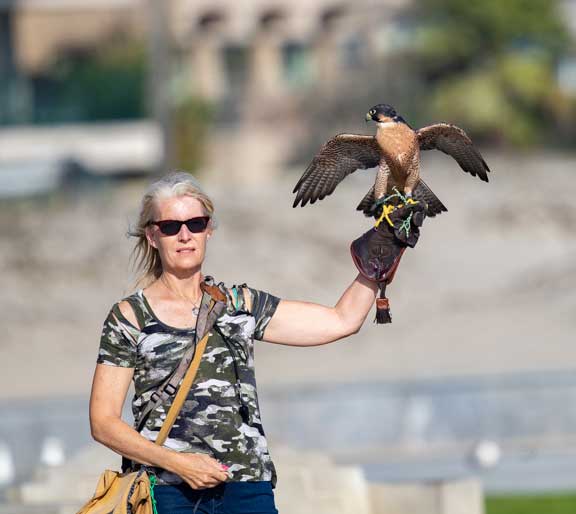 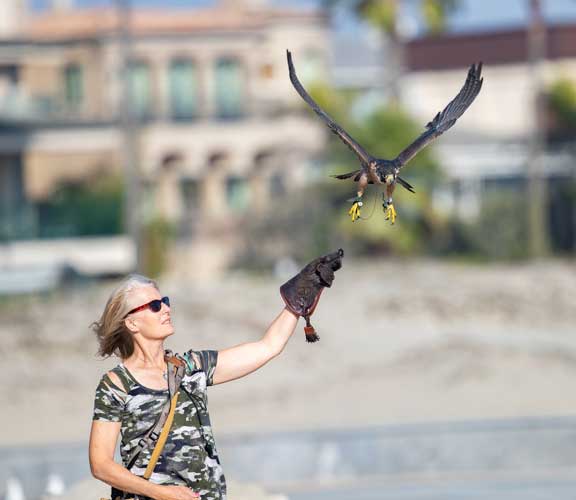 In no time it is off 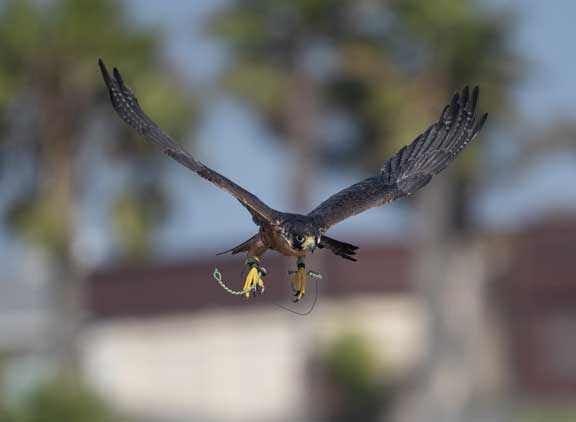 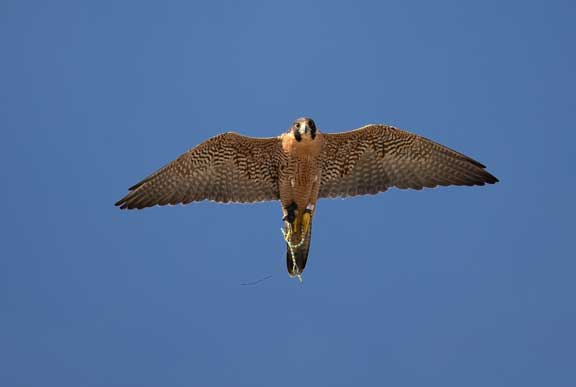 It needs height to assess its prey and to have enough speed to dive, so the first thing it does is go up. Now is when the fun starts! 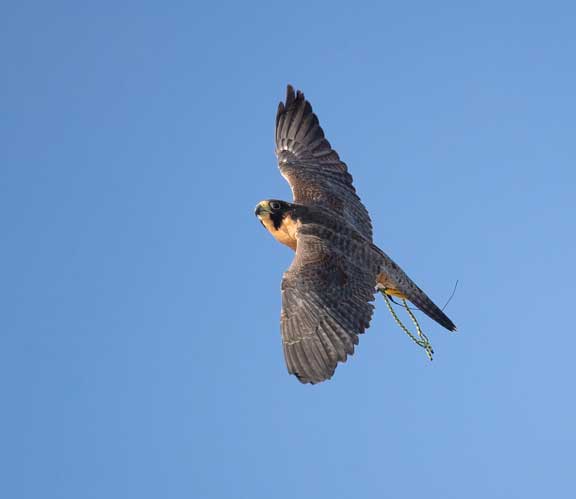 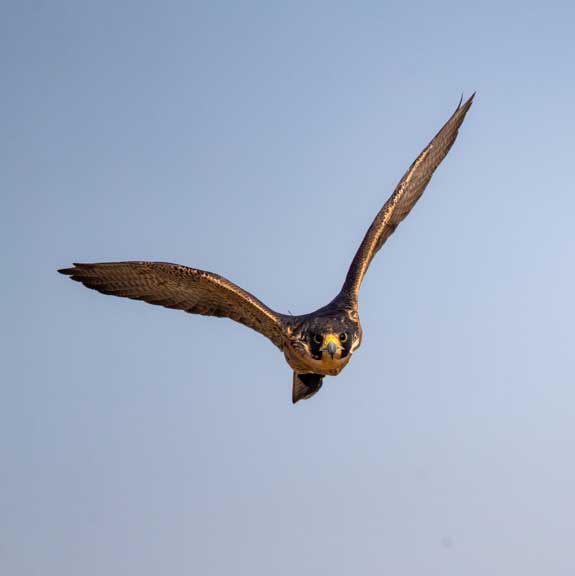 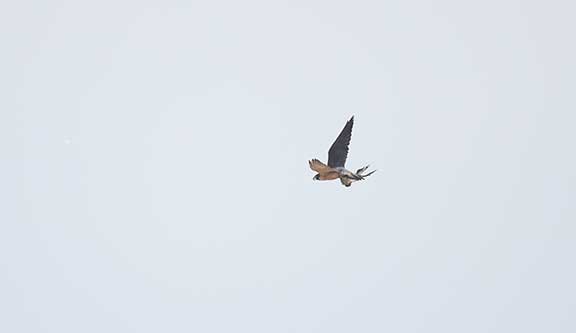 Unfortunately, the falcon was far away when it got the pigeon 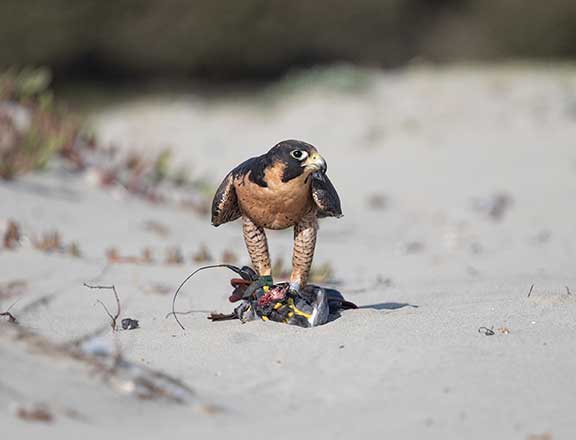 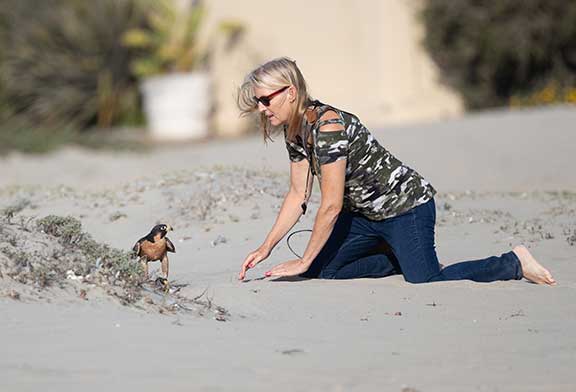 The bird has complete trust in our falconer, and she was able to walk right up even though it was eating 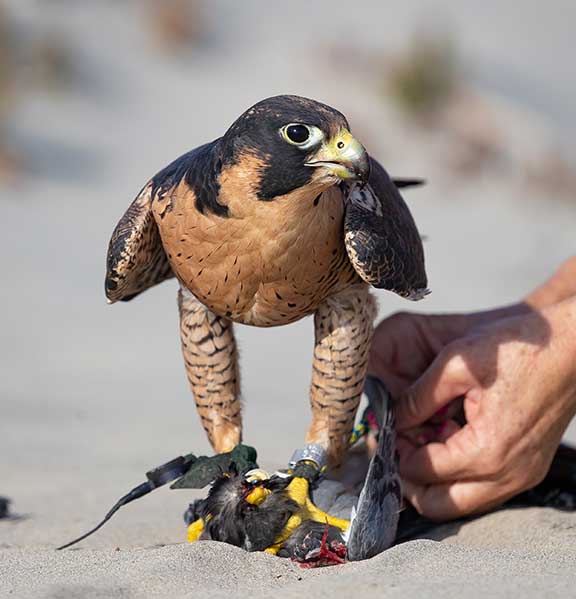 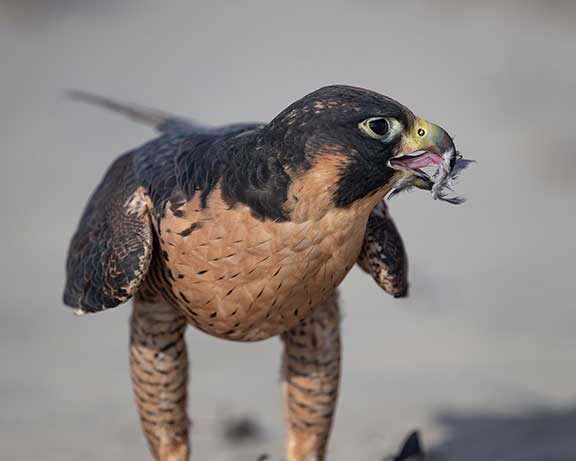 Another day, another try……. 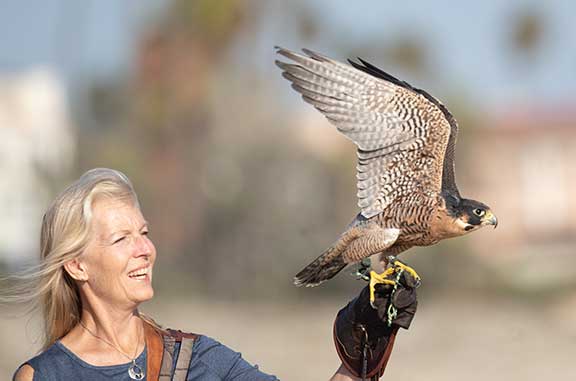 Off it went to find a new pigeon, and a pigeon it found 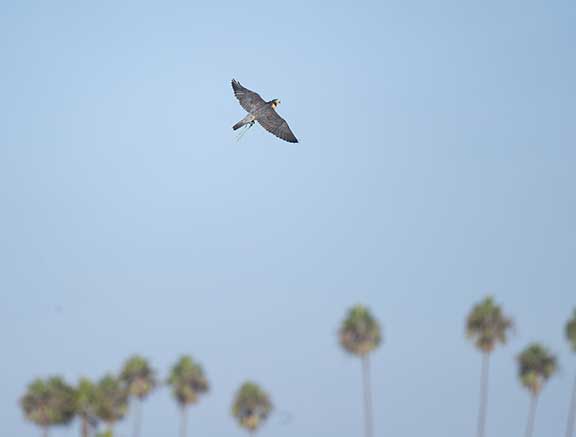 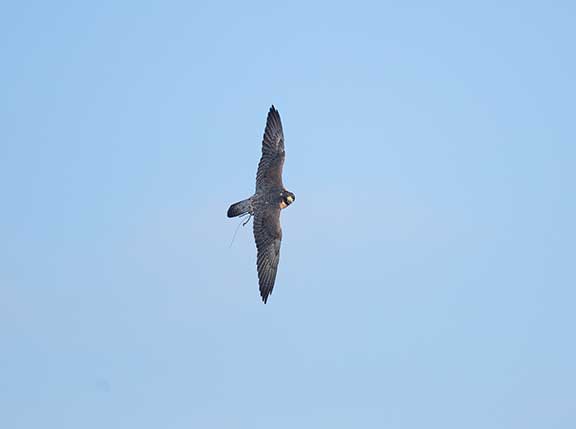 When it spotted the pigeon it banked hard to the right 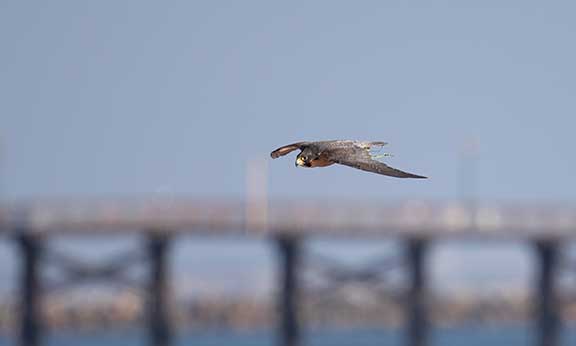 And streaked down at high speed 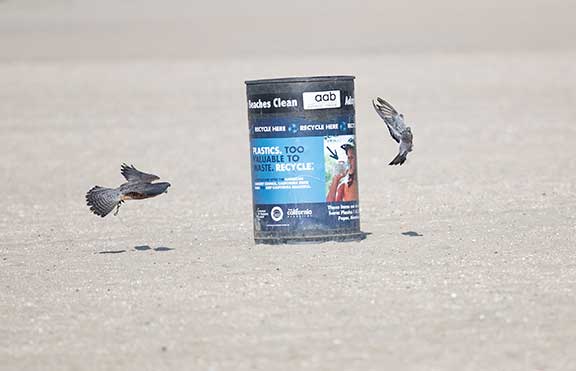 This time the pigeon stayed low, and used a garbage can for cover 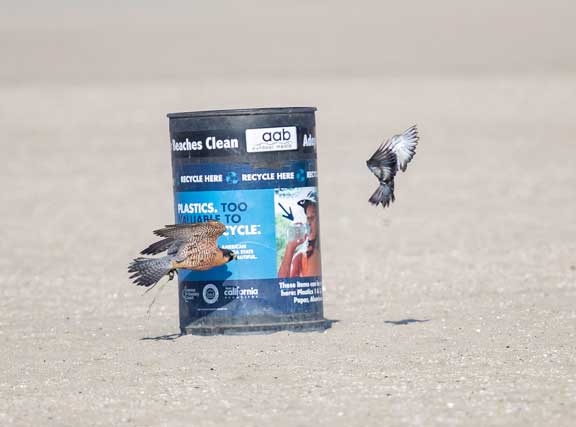 The falcon closed in….. 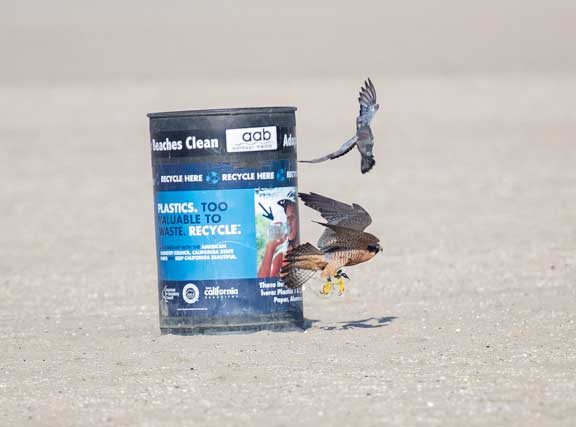 ….. but the pigeon made a hard turn at the right time 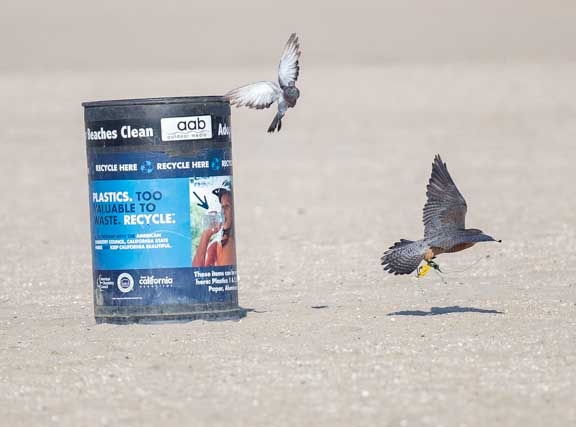 This pigeon lived to see another day 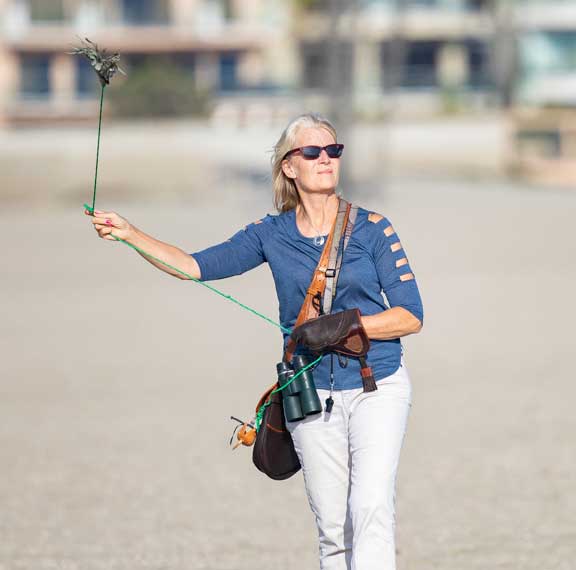 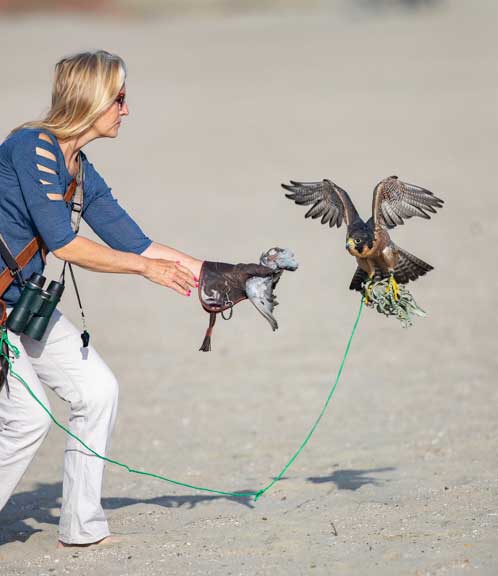 When it saw the food she had it came right in 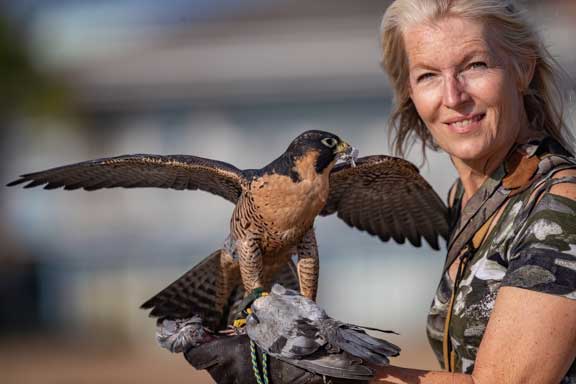 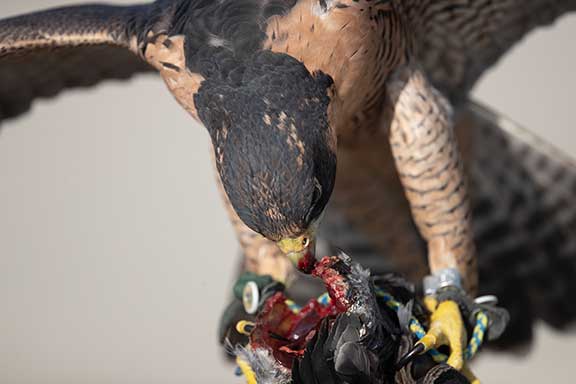