Do you really want to fly to Borneo?

Home•Do you really want to fly to Borneo?
Previous Next

Do you really want to fly to Borneo?

After flying to Jakarta from Los Angeles through Hong Kong on Cathay Pacific we spent a night at the Sheraton Bandara in Jakarta. Its a nice and reasonably priced hotel (for a Sheraton) close to the airport. 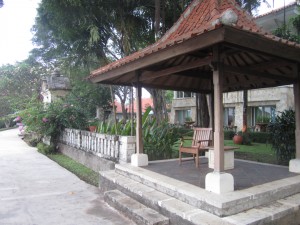 The next day we took a one hour jet flight (it was not a jet in 1991) to Pangalan Bun in Borneo. On my prior trip in 1991 I was warned that this final leg of our journey, from Jakarta to the airport at Pangalan Bun, can be quite unreliable. It will probably take off late, might not take off at all, or might even leave early. Our current flight did leave a few hours late, but that was not a major problem. The fact that we could not quite find our gate is what made things interesting.

Our flight was scheduled for 9:50 AM as you can see from this screen when we checked our bags. When we got to the security area a different screen said the flight was leaving at 8:30 AM. So it was leaving early after all! We scooted to the gate that had our flight.

As you can see from this picture our Trigana Air flight number 708 was gate C3. 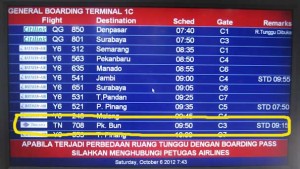 We got in line and started boarding at gate C3. When we got to the front we were told our tickets were not for this flight, even though the gate said it was. It was at this time that Jade noticed she had a different flight number on her boarding pass than the rest of us. When we told them of this discrepancy they said “no problem”, and just proceeded to write over the ticket with a pen and tried to turn the 9 into an 8. We shook our heads at each other and said “welcome to Indonesia”!

We are still smiling and enjoying the novelty of our predicament 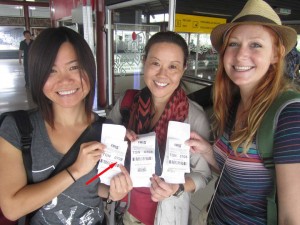 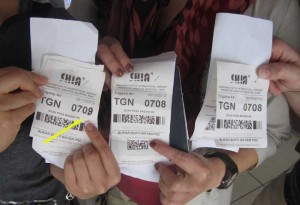 After one more aborted attempt to board a flight that left an hour later, the ticket agent came up to us and told us that our flight was next. This time we flew a 737 jet, compared to the small propeller plane I flew in 21 years ago. 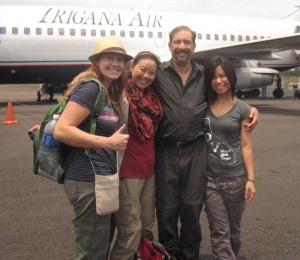 Last time it was not a jet that flew us there, so things have improved (somewhat)

When we arrived we were given a warm welcome by Cas, who arranged transportation for us to Pasir Panjing 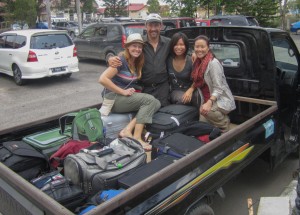 That’s Cas on the right. She is a Brit and of course talks in that funny English. She is at the end of a 10 month stint working with the orangs at the Care Center. She had two going-away parties while we were there- a fun one with us (and a few bottles of illegal beer) at Pak Sia’s house, and a formal one with everyone present, including Dr. Galdikas who gave Cas recognition for her dedication. 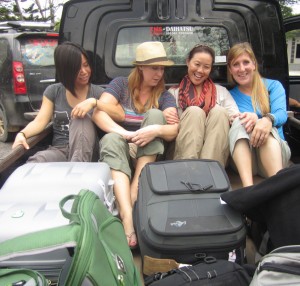 A note of interest in regards to that flight (the picture of the prop plane above) over two decades ago. When we landed in Pangalan Bun, Borneo in 1991, and were greeted by our hosts, they asked how the flight was, knowing the nature of the flight from their own personal experience. They gave us an interesting fact to allay our fears. As it turns out the mechanic that works on the airplane is require to fly on the flight. Sounds like a good idea to me!

The flights in and out of small airports like Pangalan Bun are unreliable, so plan accordingly when setting up your international flight out of Jakarta by giving yourself an extra 1-2 days to leave Borneo. The late flight and incorrect gates on the flight from Jakarta to Pangalan Bun on the way in was a minor inconvenience compared to our return flight.

When we went to the airport in Pangalan Bun two weeks later to fly back to Jakarta we found that not only was our scheduled flight not flying, but the airport was closed also. Since there was nobody at Trigana Air to talk to it was time for plan B.

Our driver, whose name is Pepper, was a big help and took us to the Trigana Air office in Pangalan Bun. After lots of smiles, blank stares, a few extra rupiahs, and help from Pepper in his broken English, we scheduled a flight from Pangalan Bun back to Jakarta 2 days later. So, back to Pak Sia’s house for 2 more days. They were not surprised to see us return knowing this was not an uncommon occurrence.

Being delayed in leaving Borneo for 2 days of course meant that I missed my Cathay Pacific international flight from Jakarta to Hong Kong and then home. This was where the real problem was. Poor phone service made it difficult to reschedule this flight on Cathay Pacific. Texting saved the day because I was able to contact my staff and they contacted the airlines to reschedule after many conversations and explanations- yea Sandra!

Moral of the story: Even though we had a plan B, and gave ourselves a one day fudge factor in leaving Borneo, in reality you need a plan C, with a 2-3 day fudge factor. Its all part of the travel experience and makes for a good story to embellish when you return home. Thankfully I had my portable computer to start working on the pictures of this web page.

Click here to return to the Back to Borneo home page.