On Sea Lion Island we came across groups of juvenile male elephant seals that were resting and molting. They had been feeding out in the open ocean for several months, and were resting up for their next journey into the sea.

These juveniles are big boys, weighing up to 2,000 pounds. After seeing how big these juveniles are, it’s hard to imagine the size of the mature male elephant seals that are up to 4x larger. The big guys come to this beach in October and November each year to gather their harems and mate. At the same time, the pups are born and the killer whales are hanging around to see what easy pickings are available. That will be next time, when I go back in mid October of 2020.

The elephant seals were calm and relaxed in my presence for the most part, so I was able to walk amongst them

Periodically two of them would pop up and start sparring 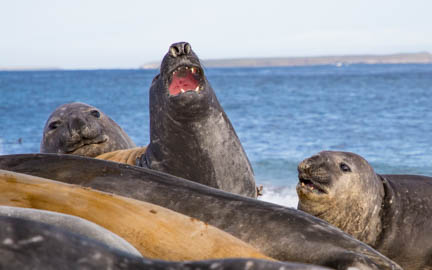 This woke up some of the others that were snoring away 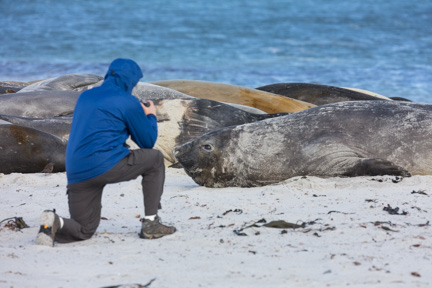 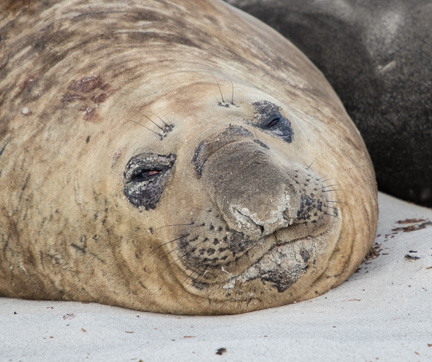 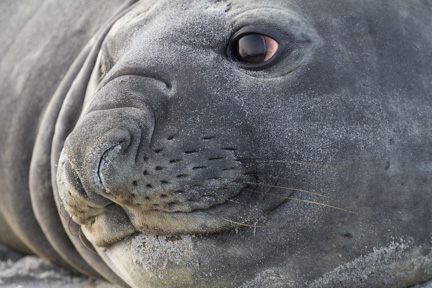 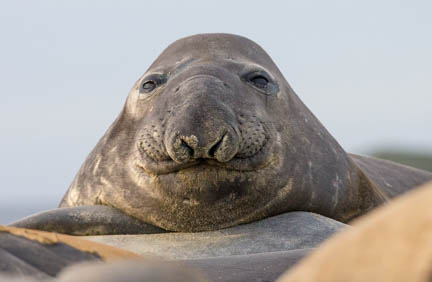 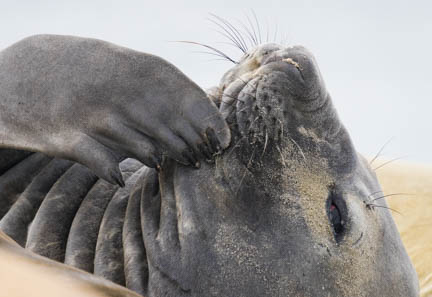 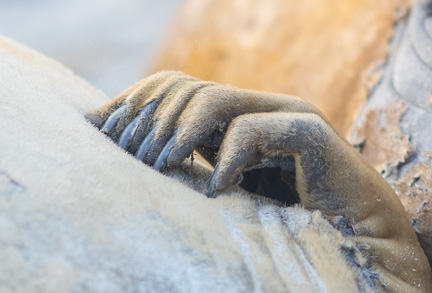 Their fingers are human-like 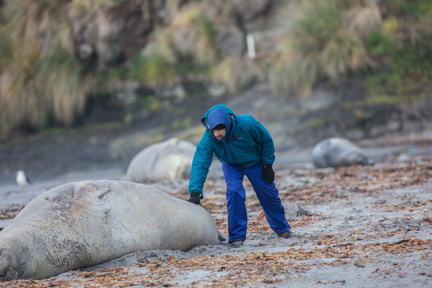 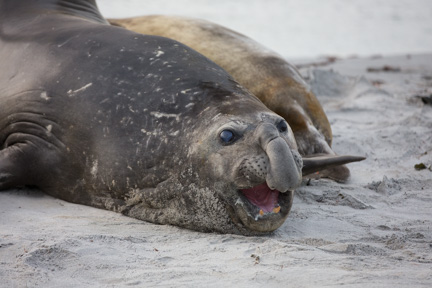 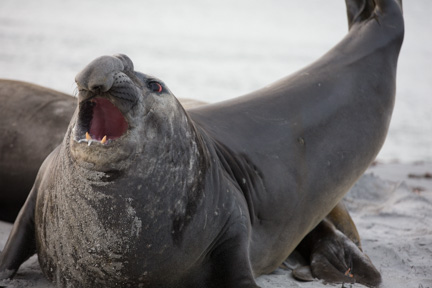 He was the most aggressive elephant seal of this group, so I kept my distance so as not to disturb him, while I photographed the others

Later on I decided to make a video of him, and got the same reception as before. As he got closer I decided that he weighed a good bit more than me, and it was time to stop recording and move away.

You can see the video shake as I was rapidly moving away. He does not look as big in the video as he is in the flesh (or should I say blubber).

I moved far enough away to give him his space, and filmed him with a telephoto lens. He still was not happy with me, and kept coming.

Eventually he stopped his charge and gave me a piece of his mind.

These males practiced their fighting abilities in preparation for being a beachmaster one day and having a harem. Some of the fighting was ritualistic, and they would just push each other around. Most times they would bite and knock each other off balance. Some of the fights started on the beach and moved into the water. When they rear up to fight you have a better idea of how large they are. This is a real good time to keep your distance. 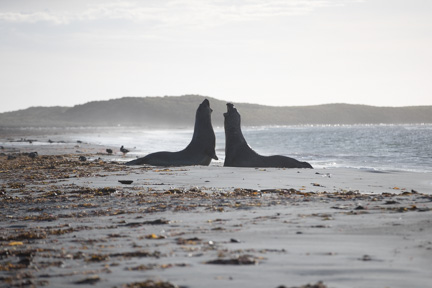 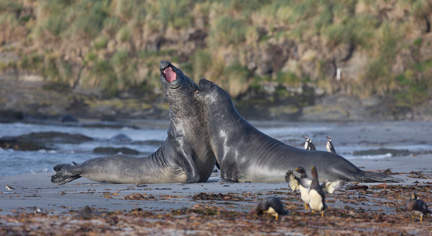 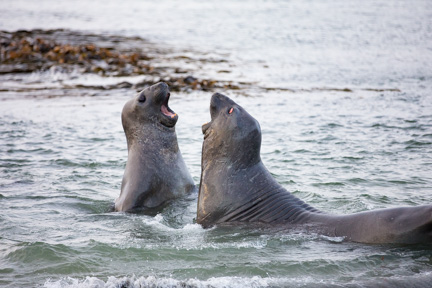 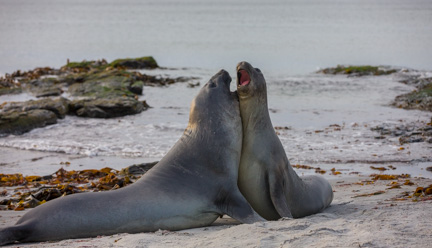 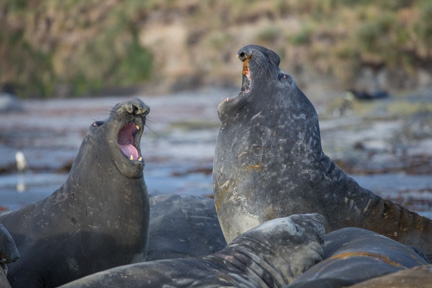 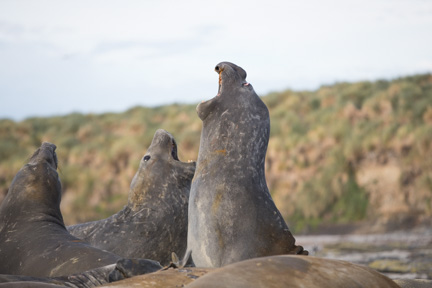 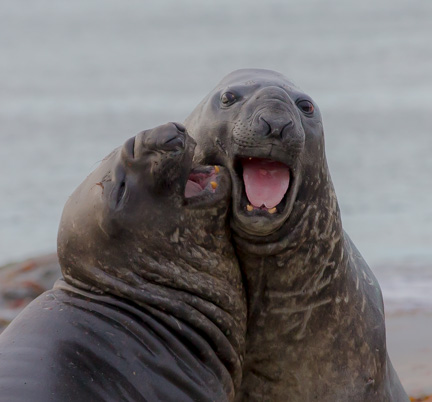 Sometimes they fought on the beach

Sometimes the fighting was in the water. As you can see from the scars on their necks, the sparring is more than a ritual

As we walked around the island we sometimes found elephant seals resting in the tussock grass away from the water. They were just hanging out and enjoying the warmth and sand. 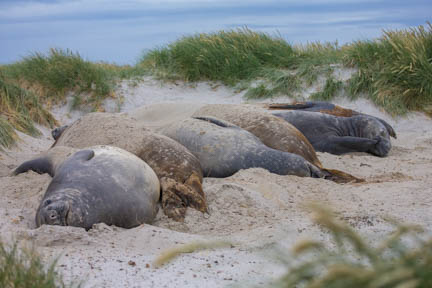 They will bask for hours 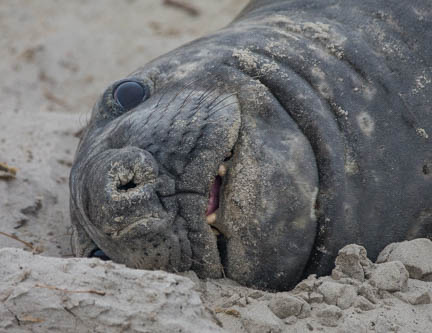 Georgina explained their behavior to us in these field interviews 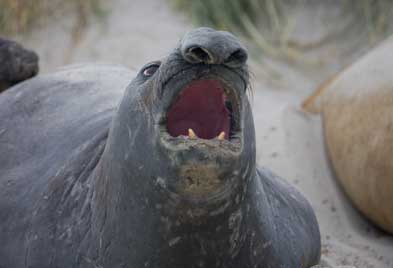 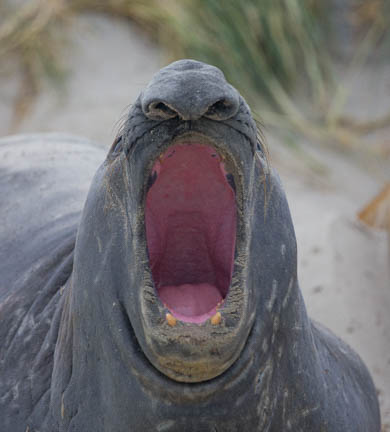 We got the message

One last snort before we go