Things were a little slow at the equator this year, so King Neptune and his wife paid us a visit towards the end of our trip. He was none too happy at some of the names we mixed up on his creatures. Things like calling pelicans as penguins, and asking dumb questions like, “who was Darwin”? As our punishment we had to memorize Darwin’s tome and recite it at dinner. 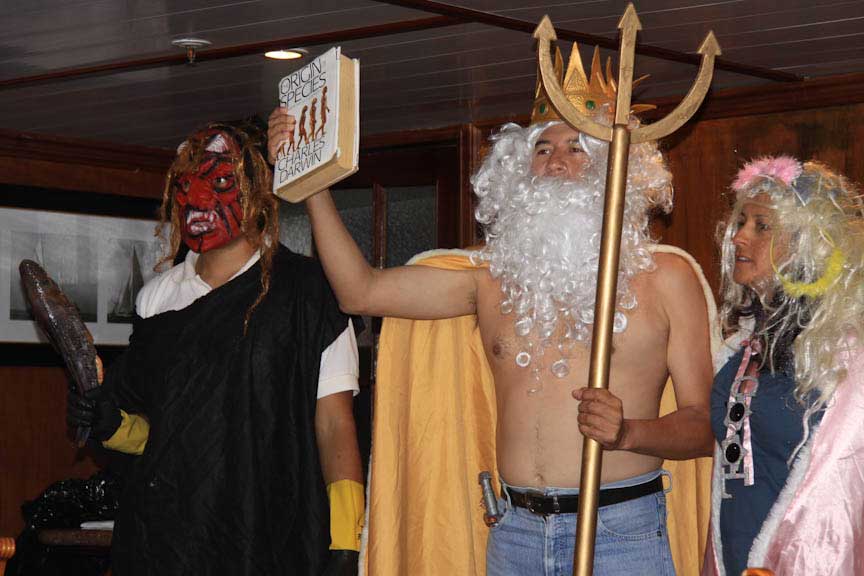 His COOL wife came along so he could show her off 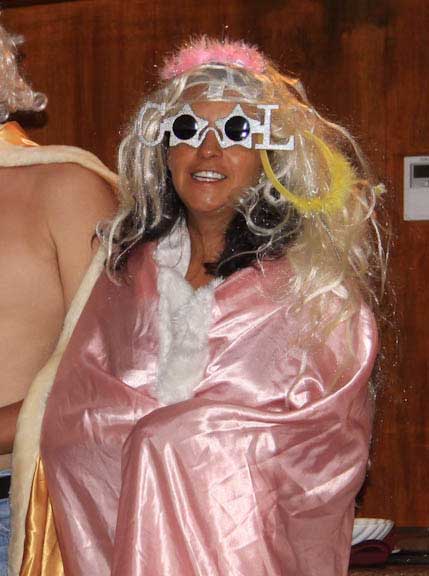 In order to make peace with Neptune some of us had to kiss a raw fish. 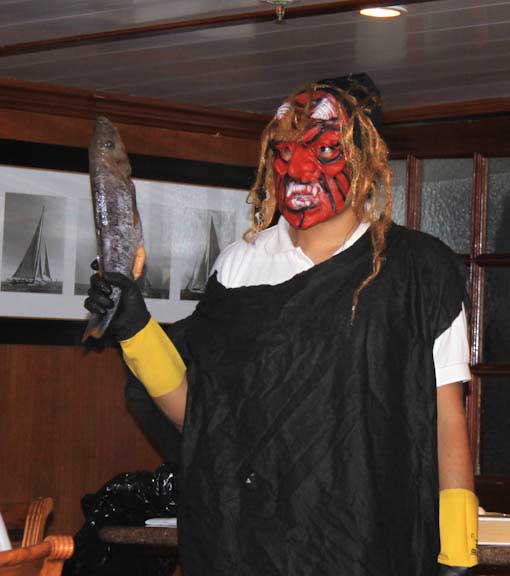 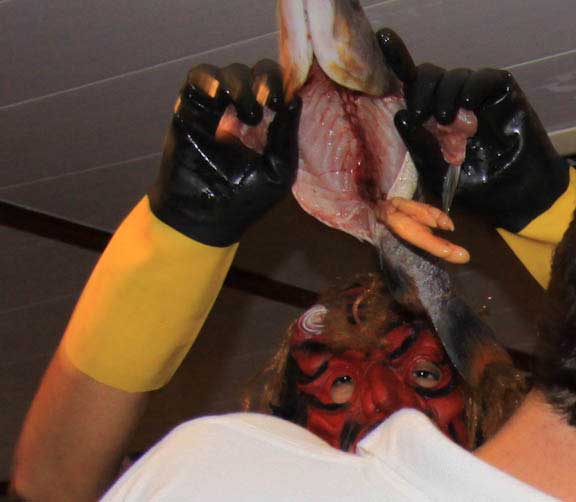 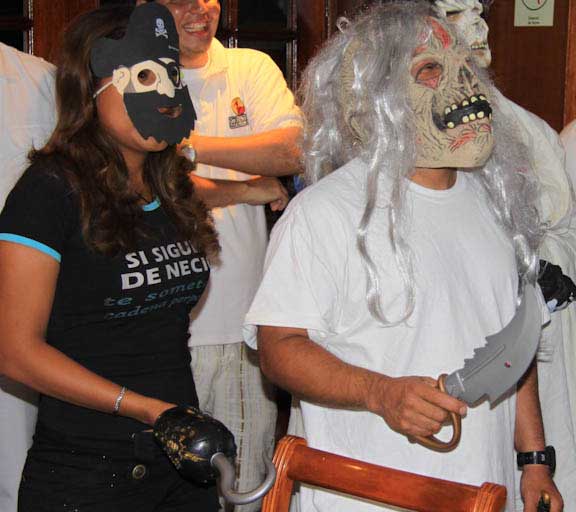 Yours truly had to go first, not because I couldn’t tell a penguin from a pelican, but because I was responsible for bringing
these rookie animal observers on the trip. Notice Dr.  B pleading for Neptune not to make her suffer the same fate. 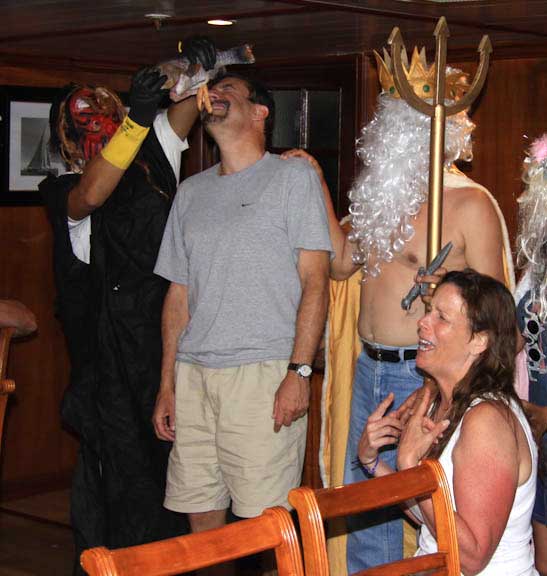 Next on the bad boy kiss list was Bill. 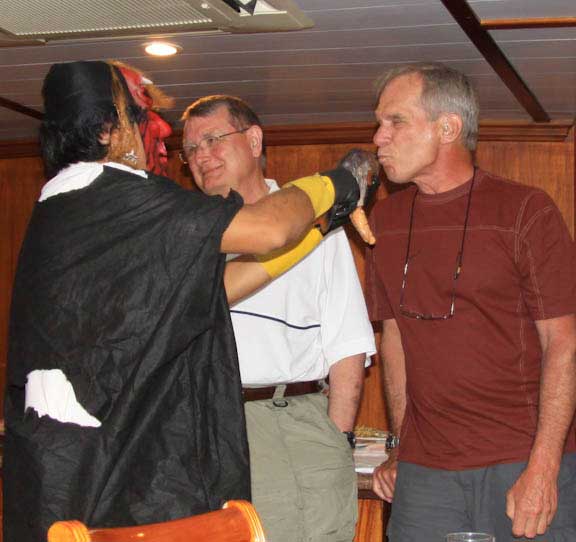 Those hillbillys from Michigan, Scott and Mary, came next. It is always a good idea to pull your pants
up before you do something humiliating. 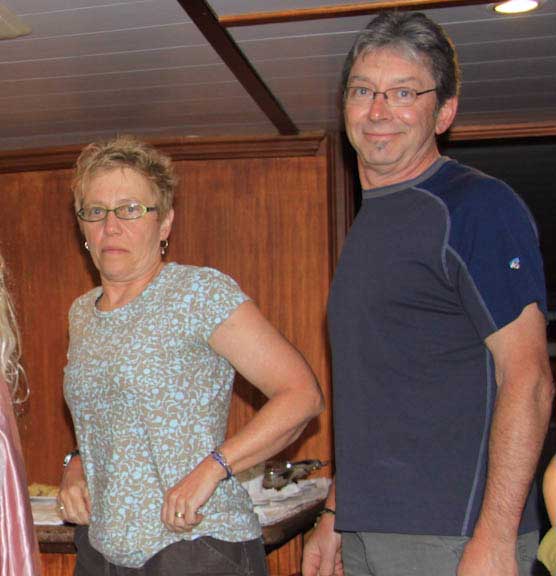 Time to kiss the fish 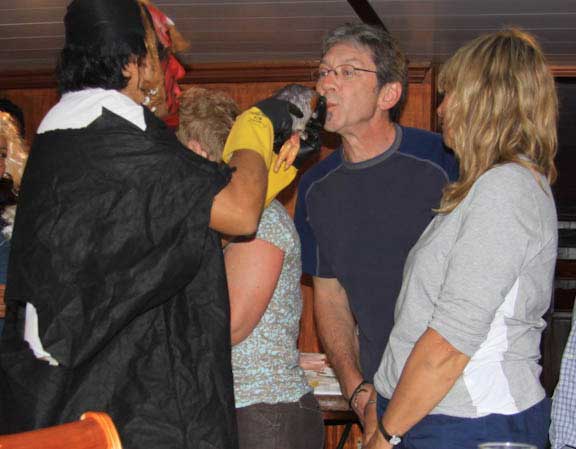 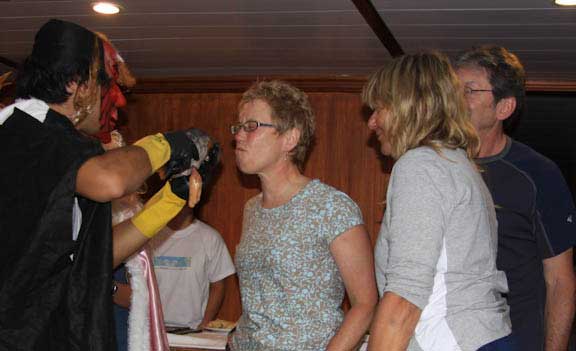 Scott and Mary embarassed us the most, so King Neptune decided they needed to do more than kiss the fish. First they had
to do the penguin strut so they knew the difference between a penguin and a pelican. 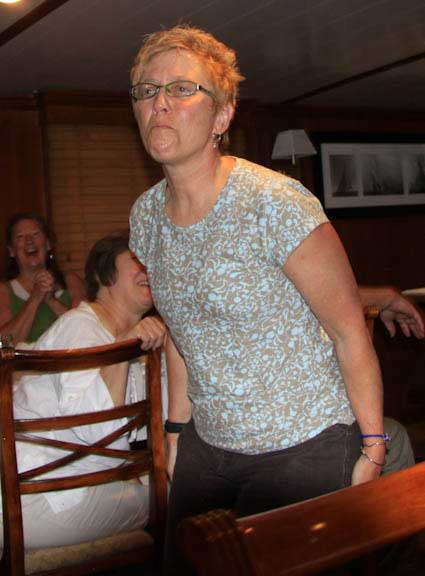 As further punishment, since she never stopped giggling the whole trip, King Neptune decided Mary
needed to drink sea lion pee so at least she was gurgling instead of giggling. 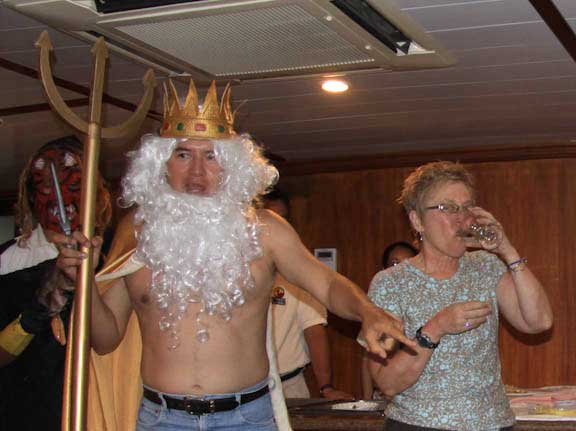 It was Mary’s turn to laugh when Karen had to drink it also. 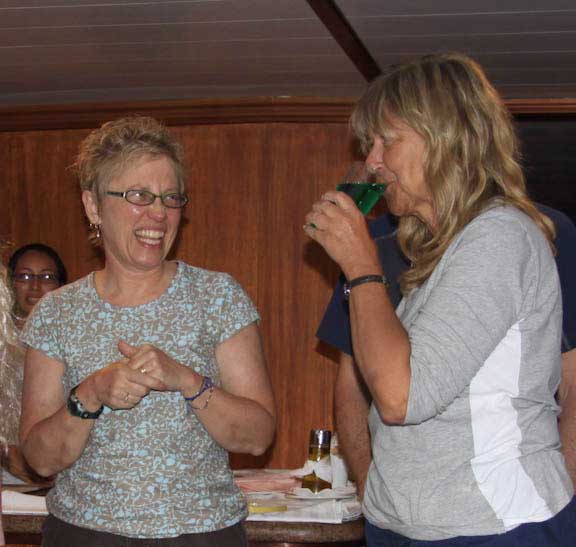 Patrick’s turn to pucker up 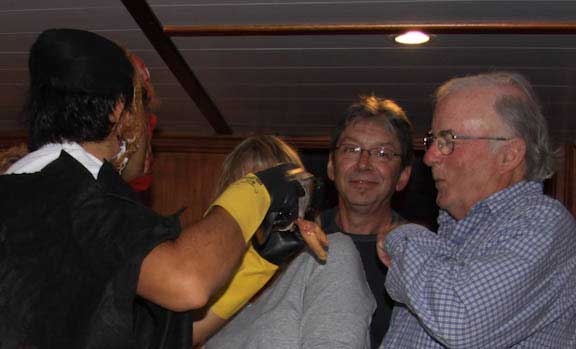 Karen and Patrick had to do the “Booby” dance 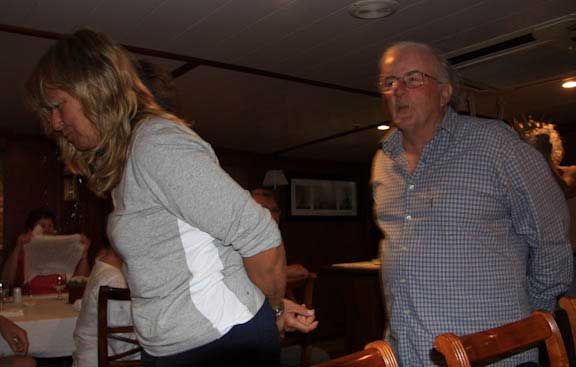 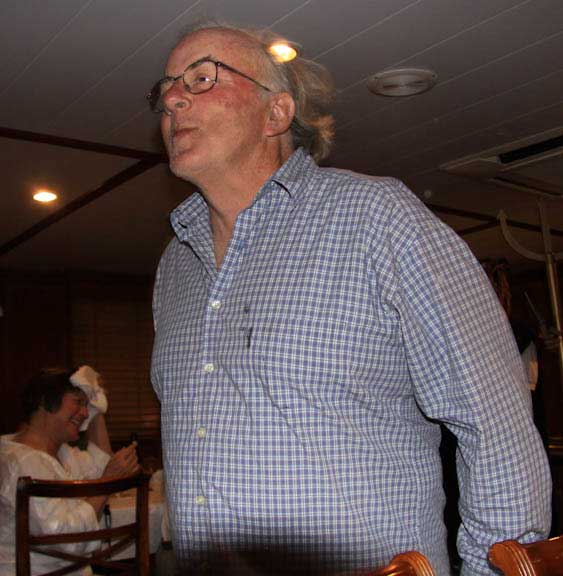 The there was Dominic. While we were all kissing fish and doing Booby dances he was doing his own kissing.
He wasn’t kissing raw fish though, he was sneaking a kiss from Mrs. Neptune 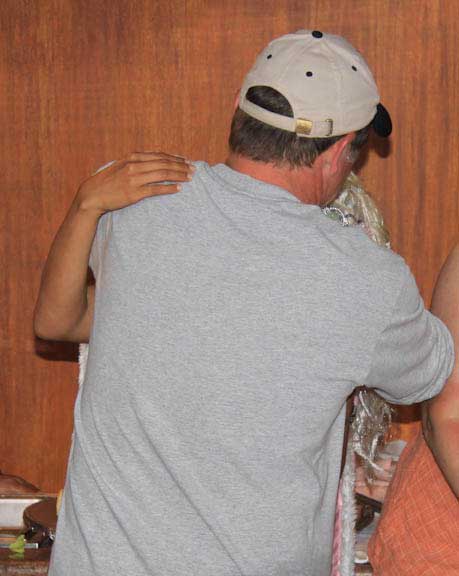 He got busted by Neptune and had to pay the price. 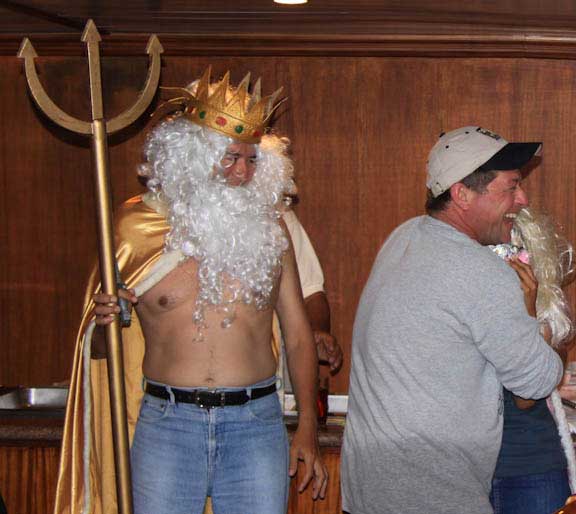 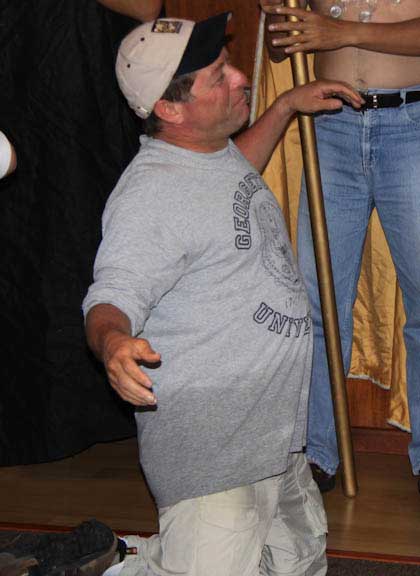 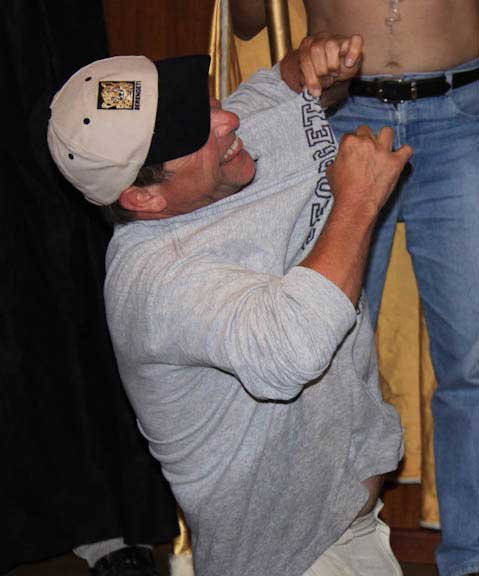 Thanks to Lorna we were able to get these pictures. She was the only one with the foresight to bring her camera to dinner- thanks Lorna! 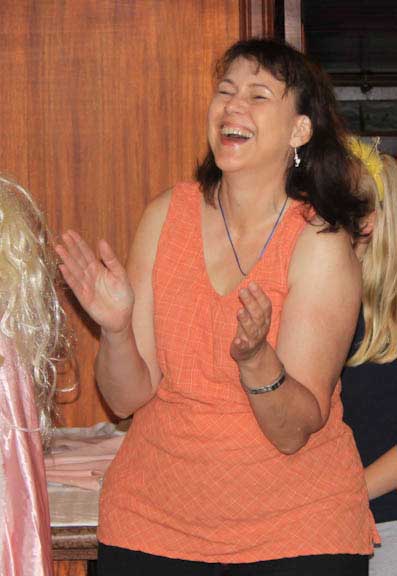