King Penguins of the Falkland Islands

Home•King Penguins of the Falkland Islands
Previous Next

King Penguins of the Falkland Islands

King penguins are the largest penguins after the Emperor. Even though you can find an occasional one on different small islands within the Falkland Islands, most of them congregate at Volunteer Point.

Derek and Trudy Patterson run the show here, and we stayed in their house with them. They are a wealth of knowledge regarding the area, and gave us free roam of the areas where the penguins congregated.

Make sure you do not miss the video at the end of the Magellanic Penguin stalking Dr. P. 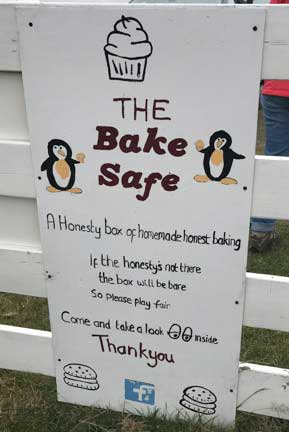 It is a 4 hour off-road drive to get to Volunteer Point from Stanley. Halfway there you can take a break and get a nibble at the Bake Safe (did you notice the Facebook icon?). 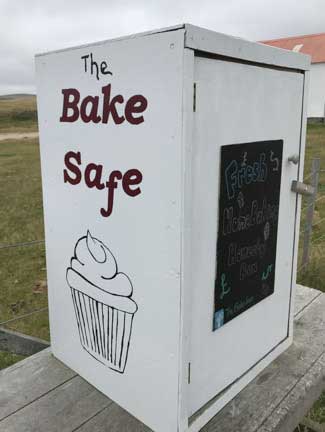 It is filled with fresh baked goodies 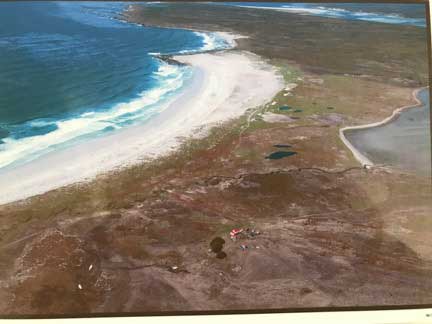 An aerial view shows Derrek and Trudy’s red roofed house were we stayed in the center bottom. The land just above the house is where the Magellanic penguins had their burrows. On the beach we saw Gentoo, Magellanic, and King penguins.

Here are all 3 of them for a size comparison 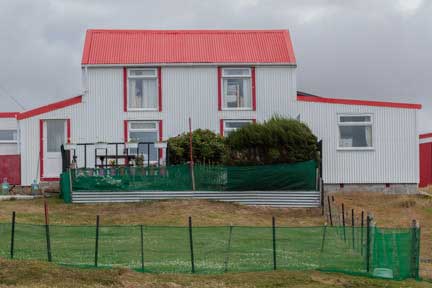 The house is quaint, with just a few rooms for guests. Our hosts made us feel at home, with their hospitality, food, and knowledge of the area. We had free reign of the land, something the guests that came in on the tour boats did not for their few hour visit. 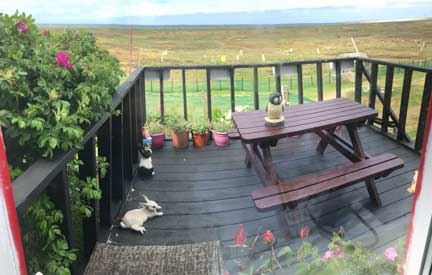 It would have been nice to have our tea time on the quaint porch, too bad the wind was a bit brisk to say the least 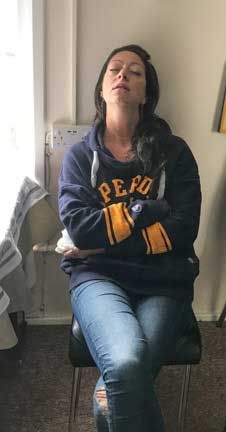 Dr. P likes to share, so he shared his flu symptoms of stuffy nose and achey body with Georgina and Dr. K. (hey, what are friends for?). They pretty much stayed in bed recovering from their ailments the two days we were at Volunteer Point. 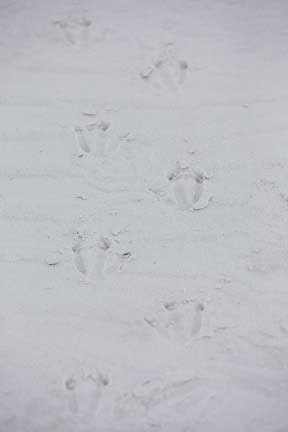 Now you know what King penguin footprints look like

The Kings acted like we were not even there as they paraded around in their tuxedos. They would sometimes stand as if at attention, waiting for us to take a photo of them. As you will see, we even discovered a new subspecies of King Penguin, called the penguinous headless (headless penguin). 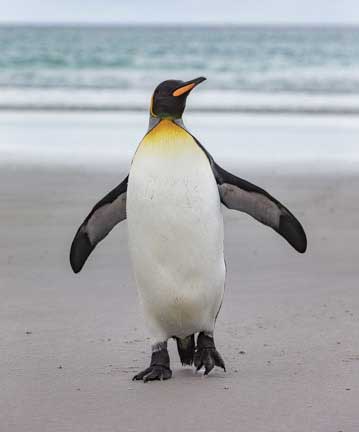 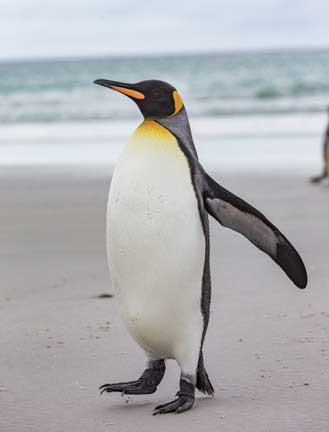 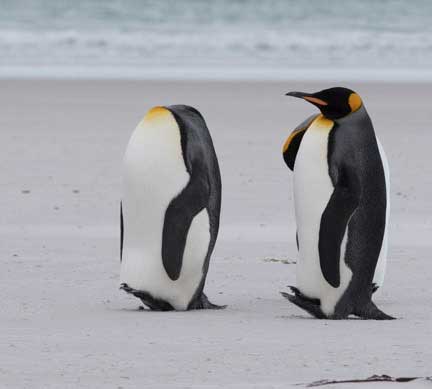 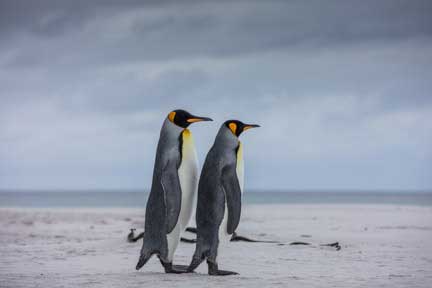 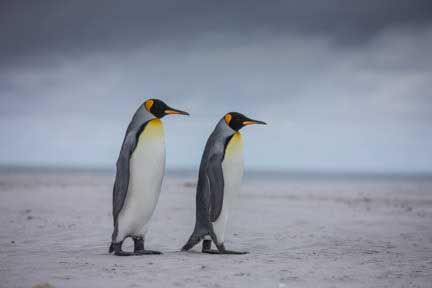 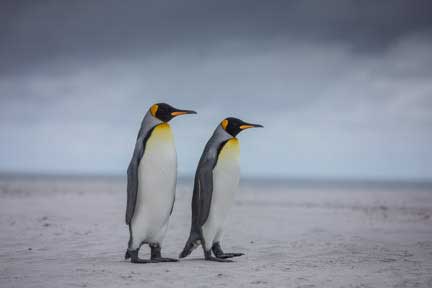 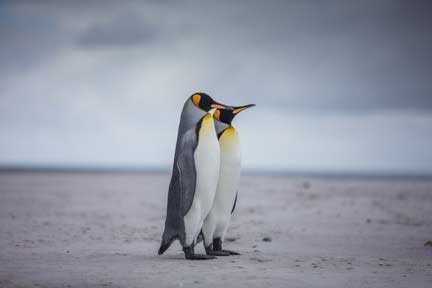 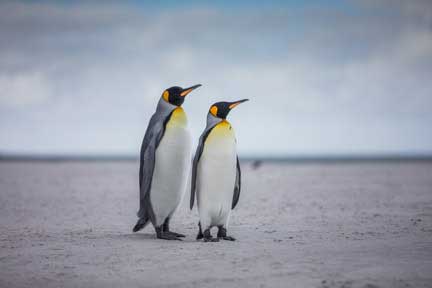 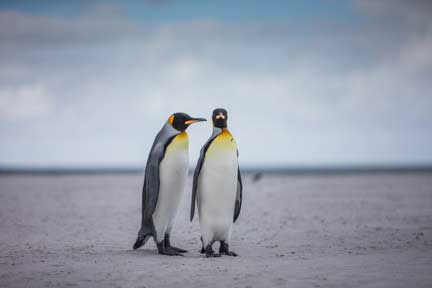 Walking back home from the beach past the Magellanic burrows one evening Dr. P had one of the best penguin encounters of the trip. Being careful not to disturb the penguins at their burrows with their chicks, he walked slowly and tried not disturb them as he continued on his way. Halfway back he had the feeling that something was following him. He turned to find one very inquisitive penguin following him. He stopped and turned on the video camera while the penguin moved in so close that he was afraid the little guy would scratch his lens with its beak. It was friends at first beach! This one experience alone made all the time and effort to get here worthwhile. 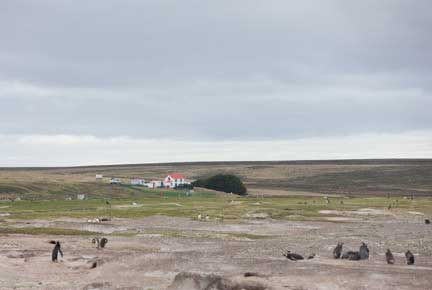 The view from the beach as the walk began 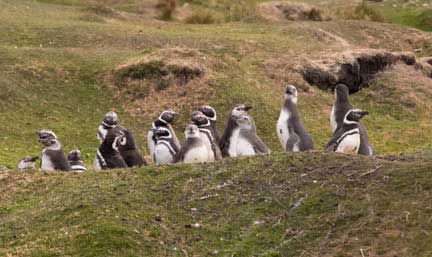 There were many burrow, adults, and chicks, and most of them seemed leery of him. Most, but not all, as you will soon see!

They exchanged email addresses, and will be seeing each other again when Dr. P goes back in the late fall of 2020