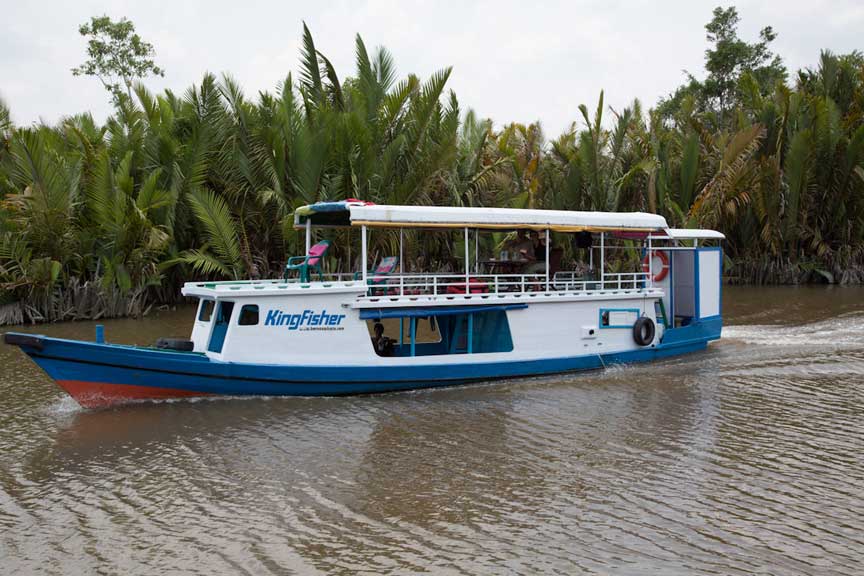 Klotoks are a wonderful way to travel the Sekonyer to Camp Leakey. They are called klotoks due to the unique sounds of their one cylinder engines. They travel at just the right speed to get you to your destination, while at the same time allow for wildlife viewing and photography in the vegetation along the river.

This is the engine room of the klotok 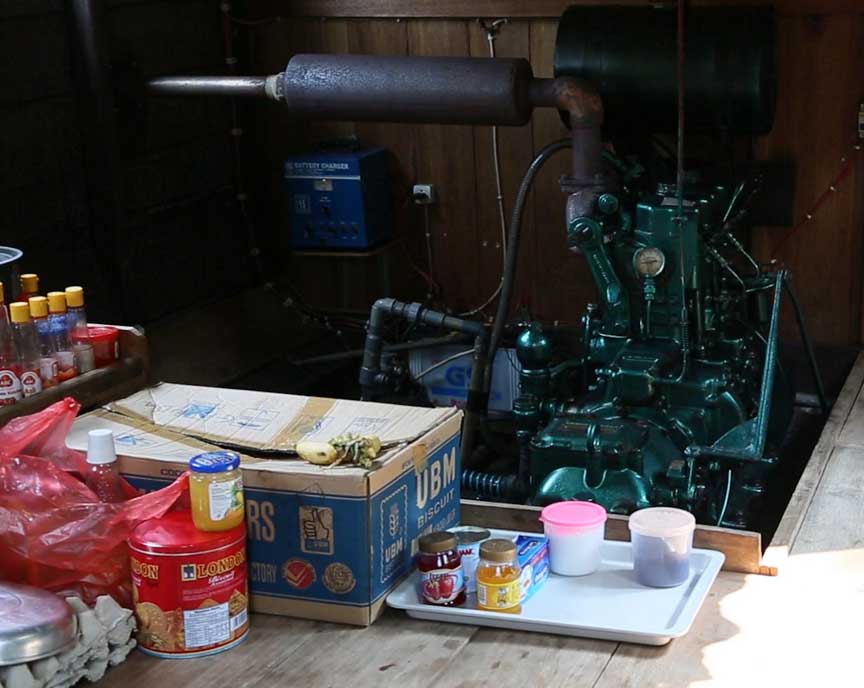 The four of us spent 3 days and 2 nights on this klotok as we cruised the Sekonyer river upstream to Camp Leakey, stopping at feeding stations along the way 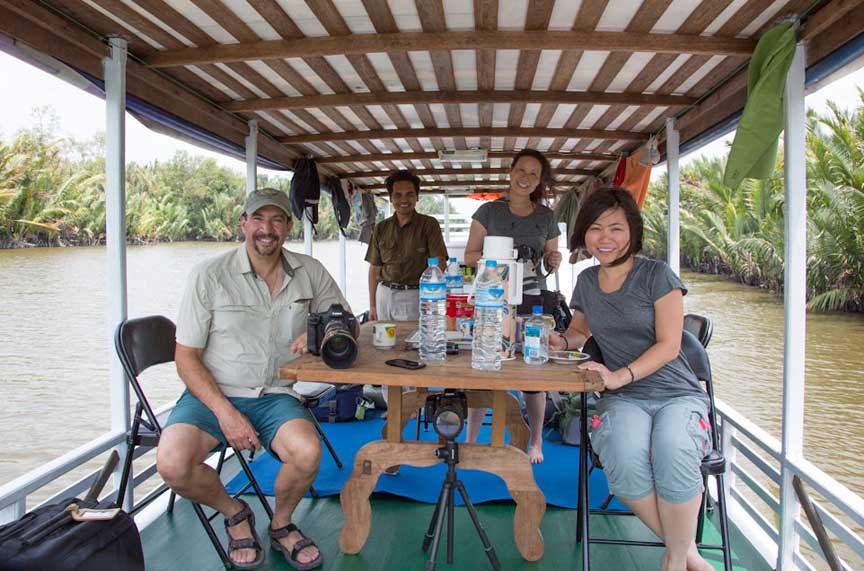 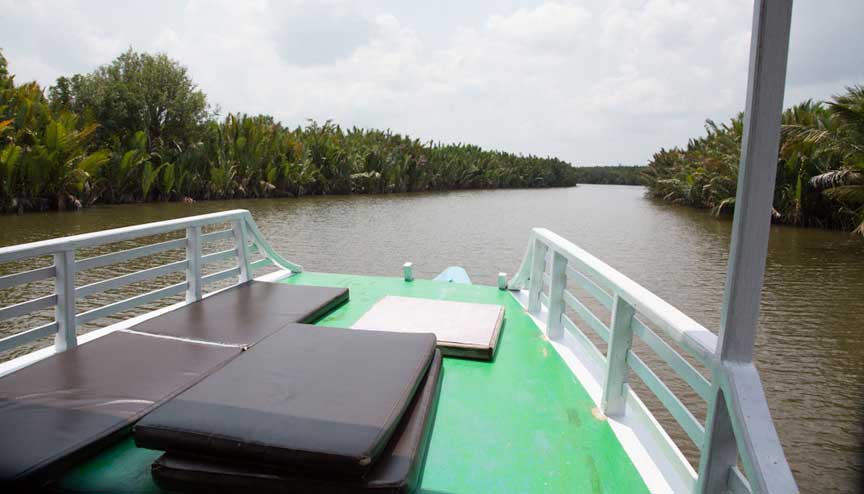 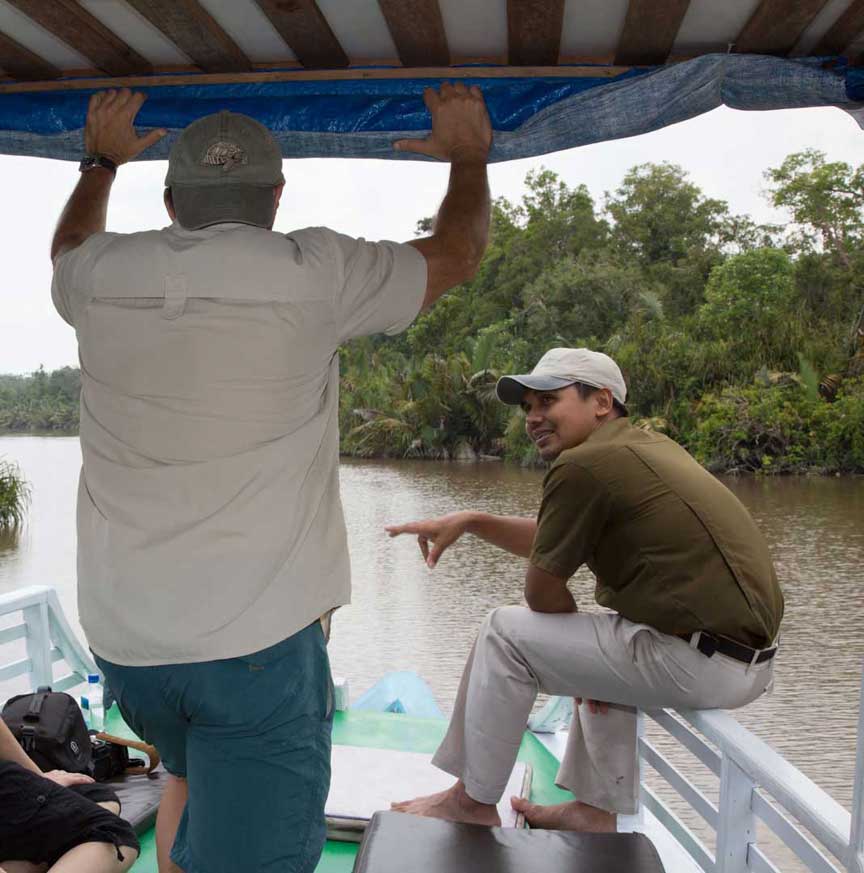 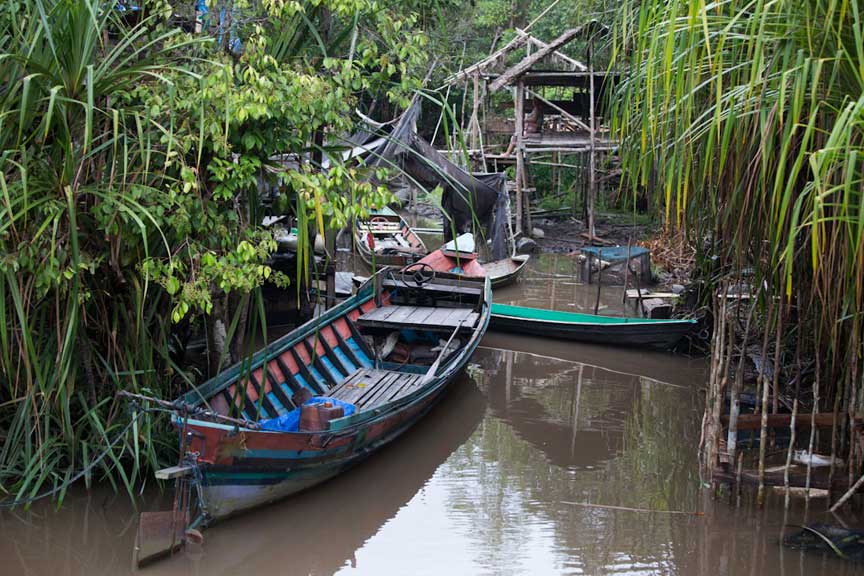 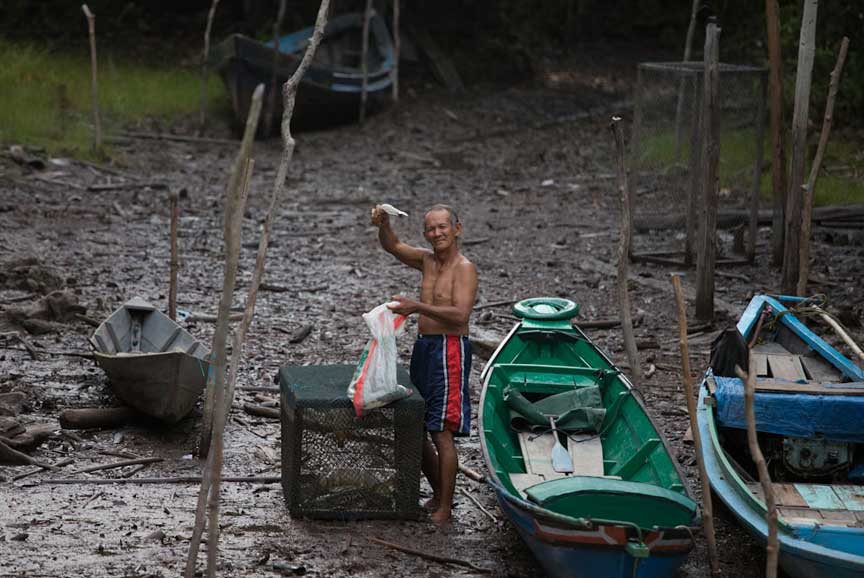 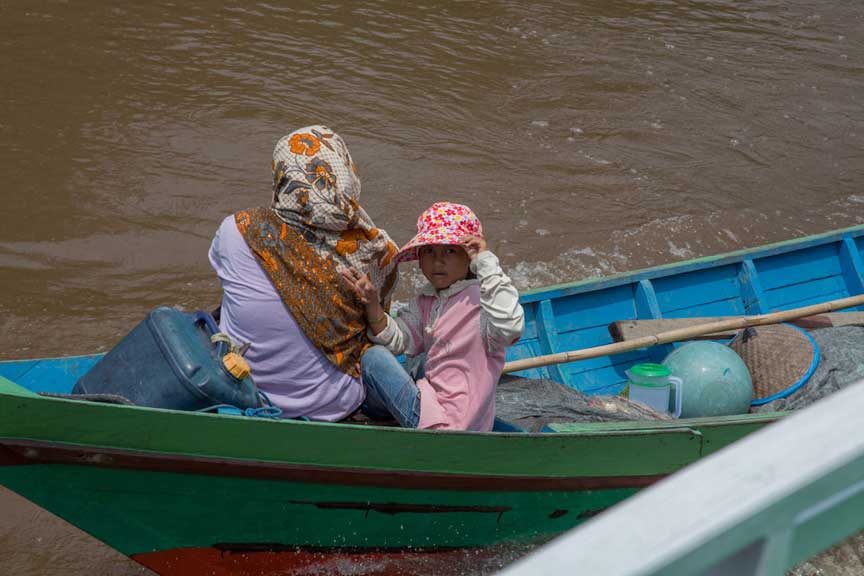 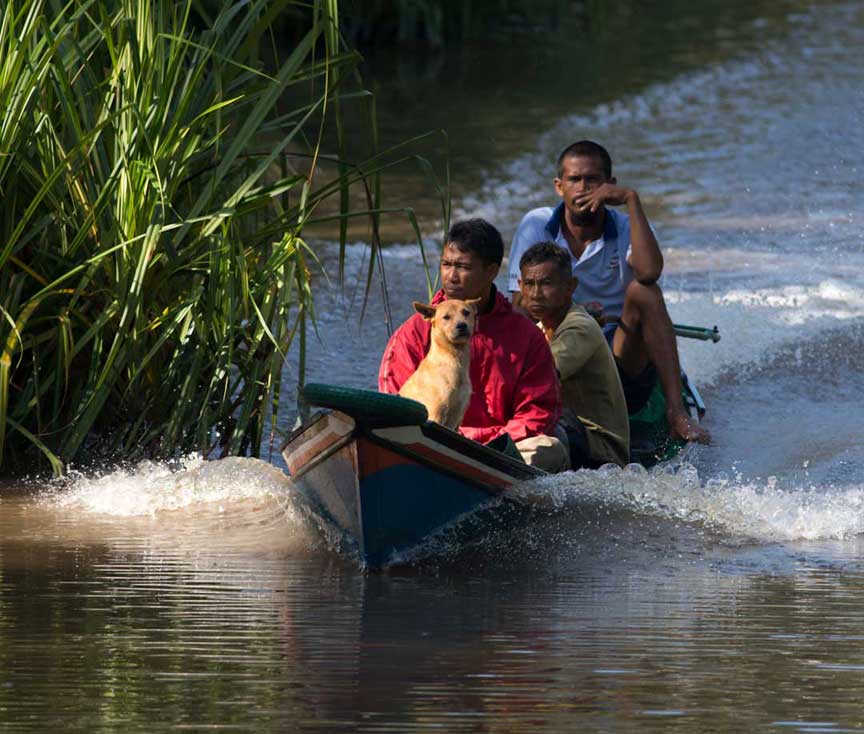 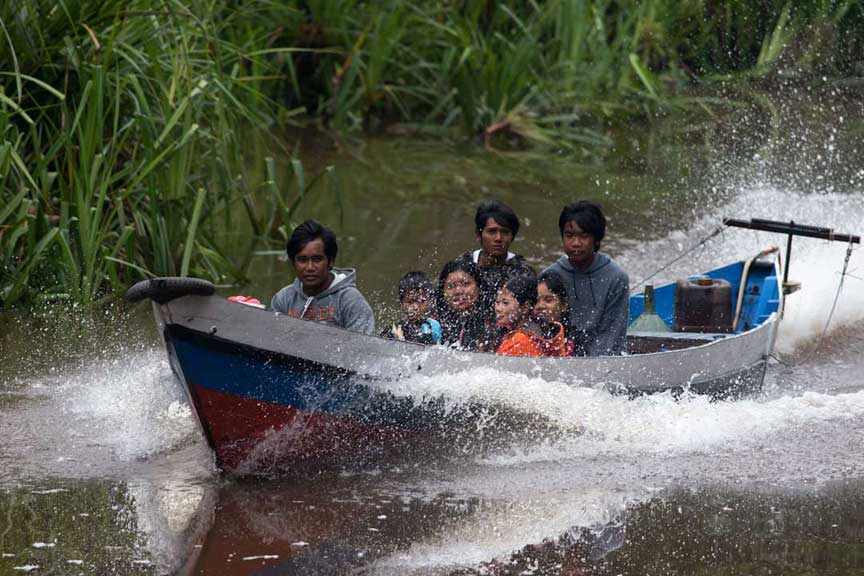 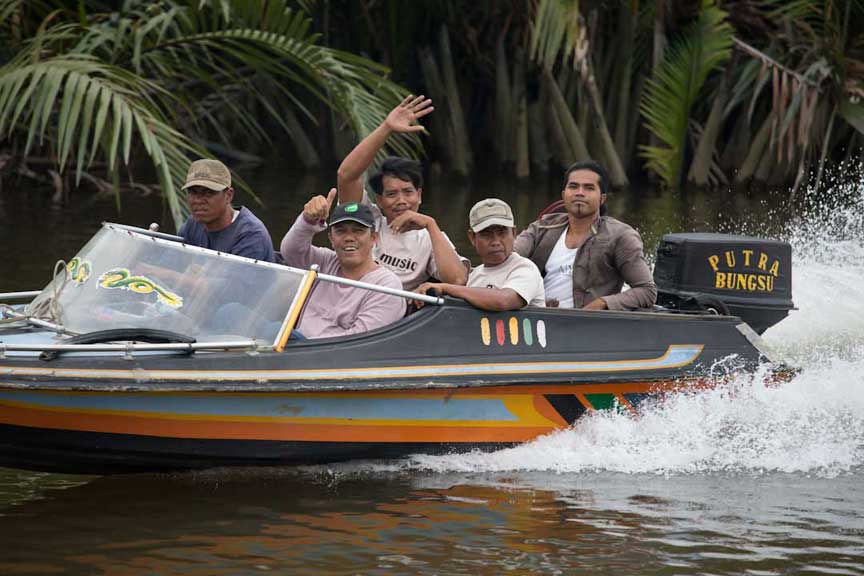 The Sekonyer river has an abundance of wildlife. Many birds, large crocodiles (which is why swimming is not allowed any more), garials (fish-eating crocodiles), macaques, and proboscis monkeys to name just a few.

This is a stork-billed kingfisher 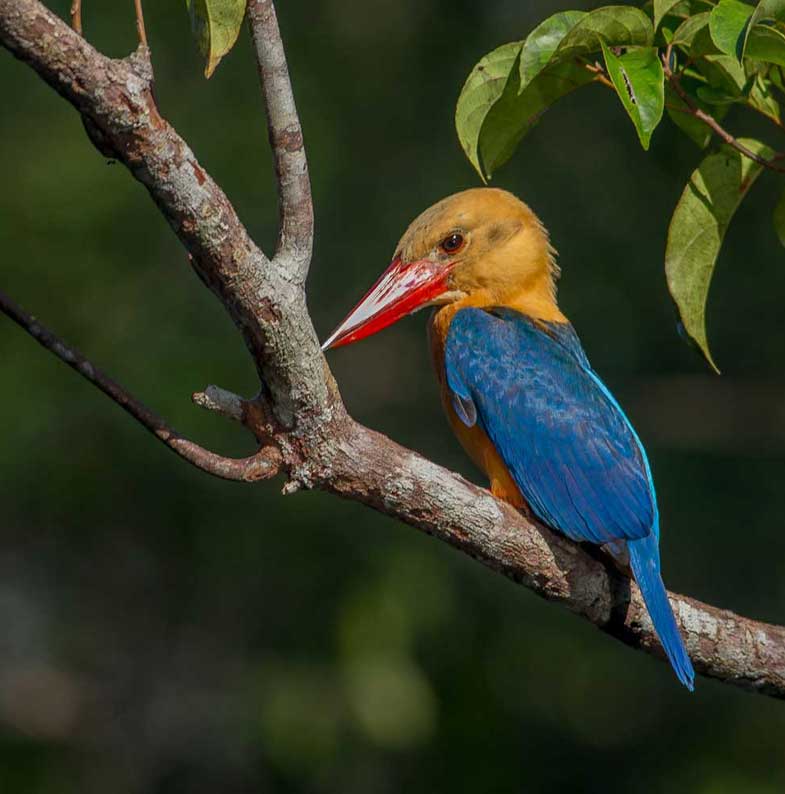 This is a male proboscis monkey 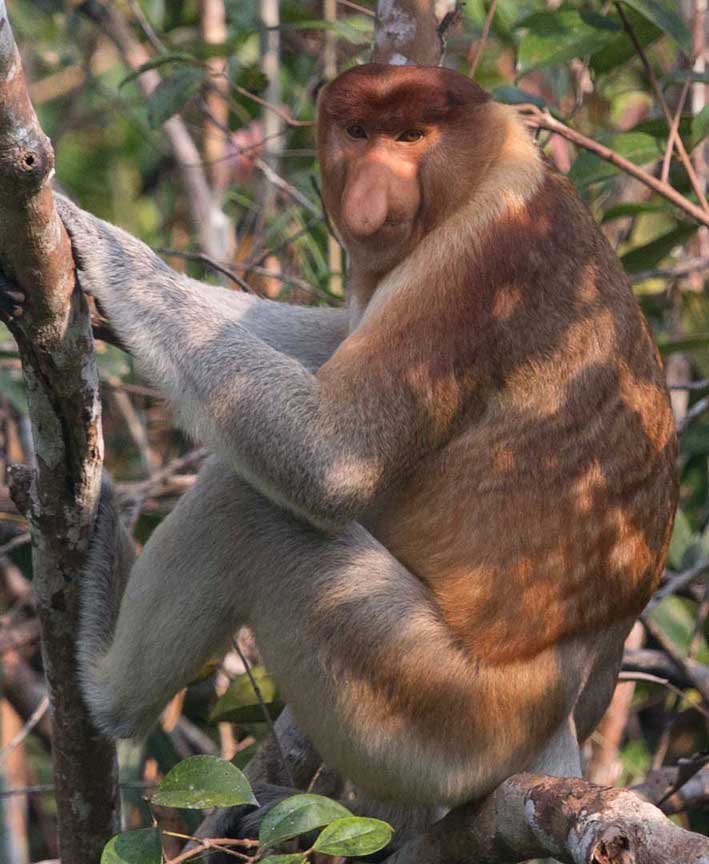 This is a rainforest, so when it rains, it pours. This brings out the birds to catch the hatching insects. We were there at the end of the dry season, so it only poured a short period of time. In the rainy season it can rain nonstop for days. 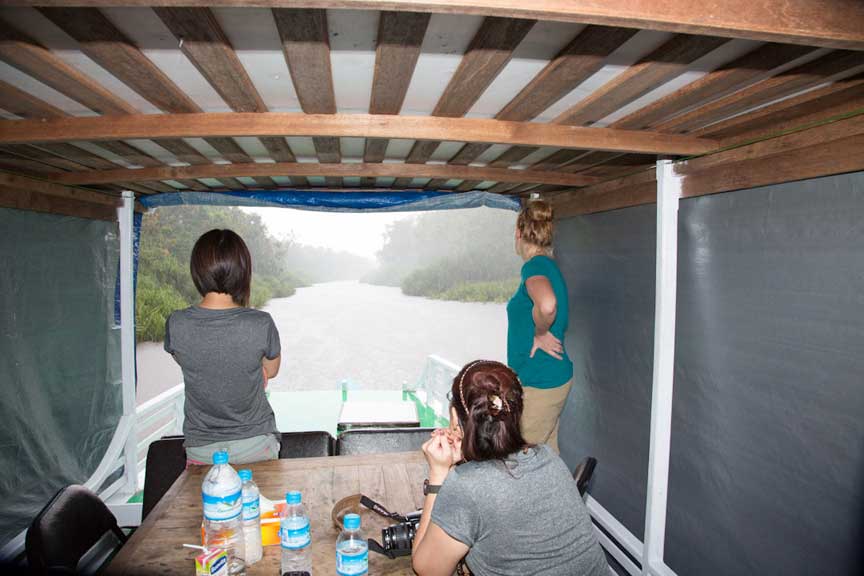 Before you get to your final destination of Camp Leakey there are several stops along the way at feeding stations for the semi-wild orangutans. They feed the orangutans (and other critters that show up) a combination of milk, banana, and pineapple. These animals are having a hard time finding adequate nutrition in the devastated rainforest, so this supplemental feeding is highly beneficial to them.

Depending on your specific itinerary, the first feeding station is Pondok Ambung 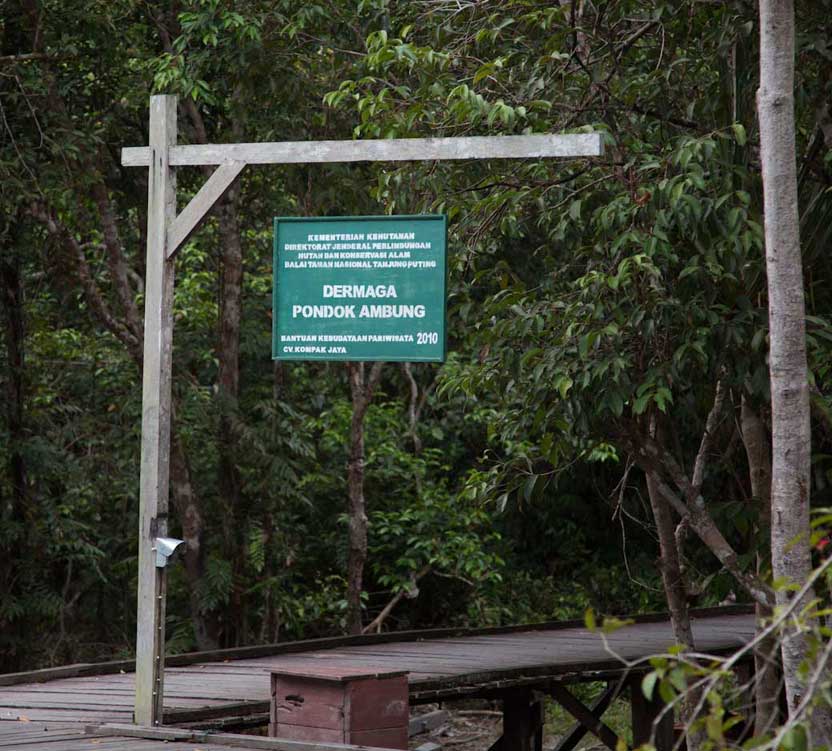 The next one is Pondok Tanguui 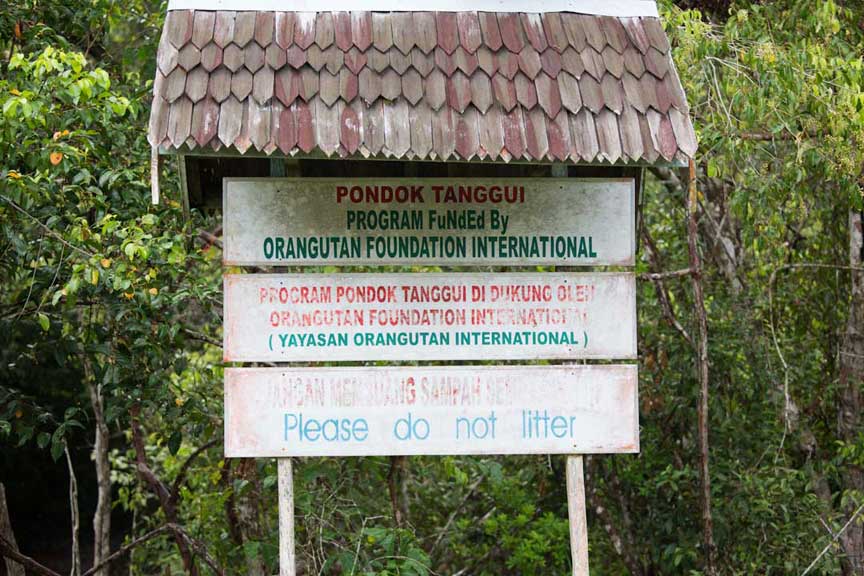 This is the equator, which means around 12 hours of sunshine and 12 hours of daylight every day since there are no seasons. As the sun sets around 6 PM its interesting to hear the night sounds of the rainforest and see the fireflies and nocturnal animals. 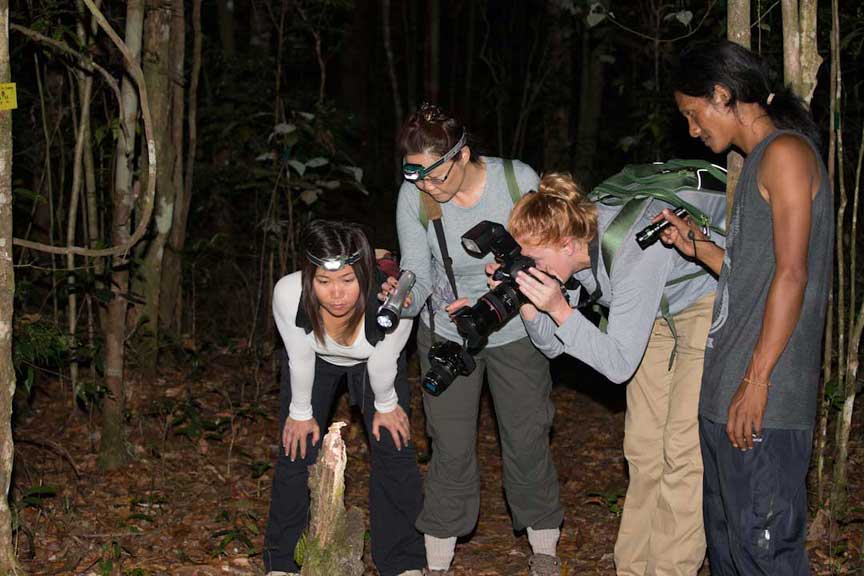 We met a cute frog 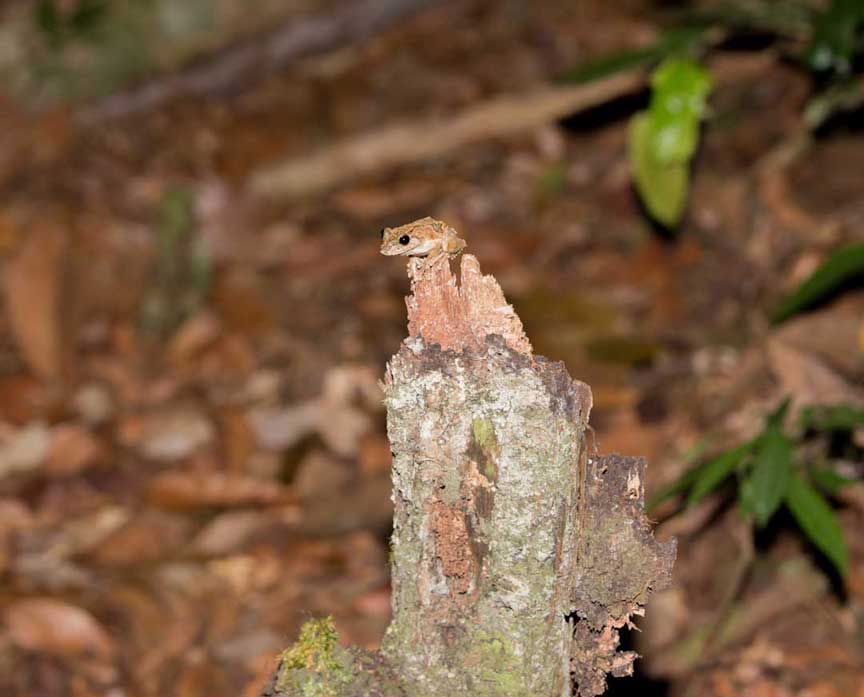 He took a liking to Jade and jumped on her 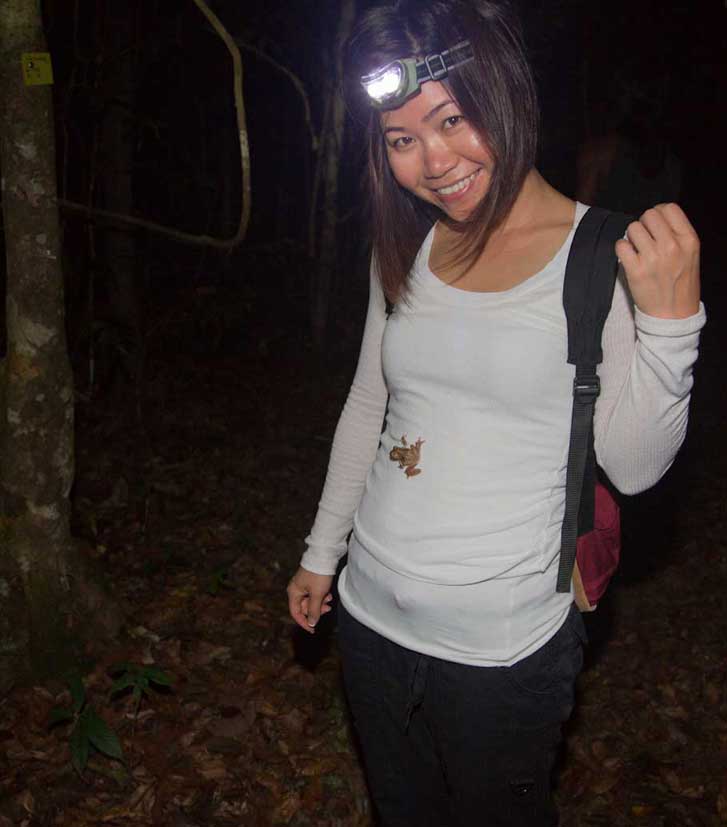 You sleep on the klotok on comfortable mattresses with mosquito netting. Even though we chatted away, and even sometimes played cards, most people went to bed early since you would be up early as the gibbons did their morning serenade.

It was still hot and humid at night when we went to sleep. Portable fans were a big help 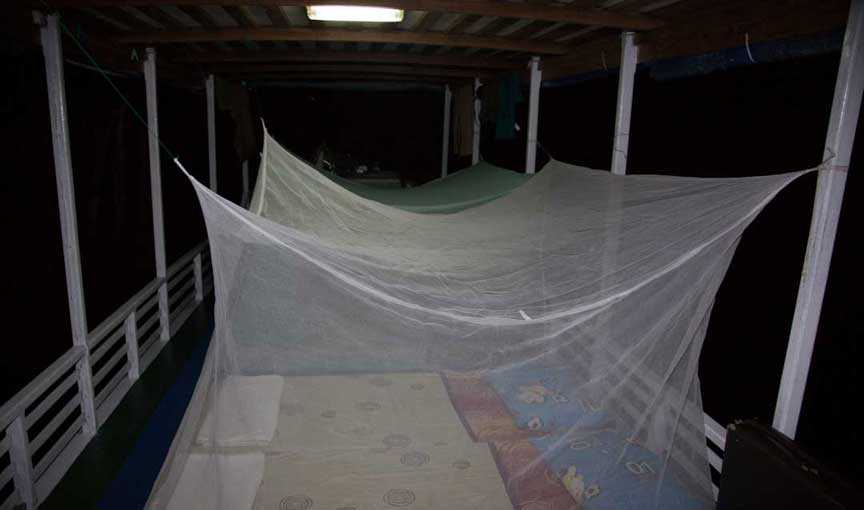 Before we went to bed a sociable Praying Mantis made friends with Jade and then promptly fell asleep on her hand! 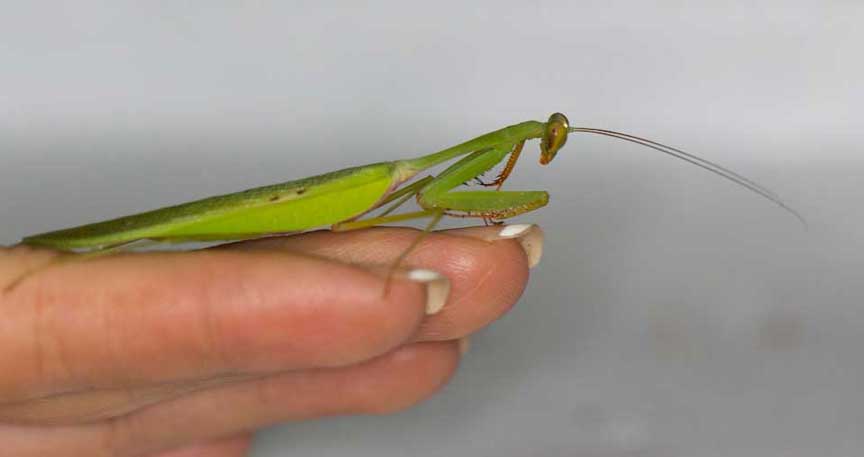 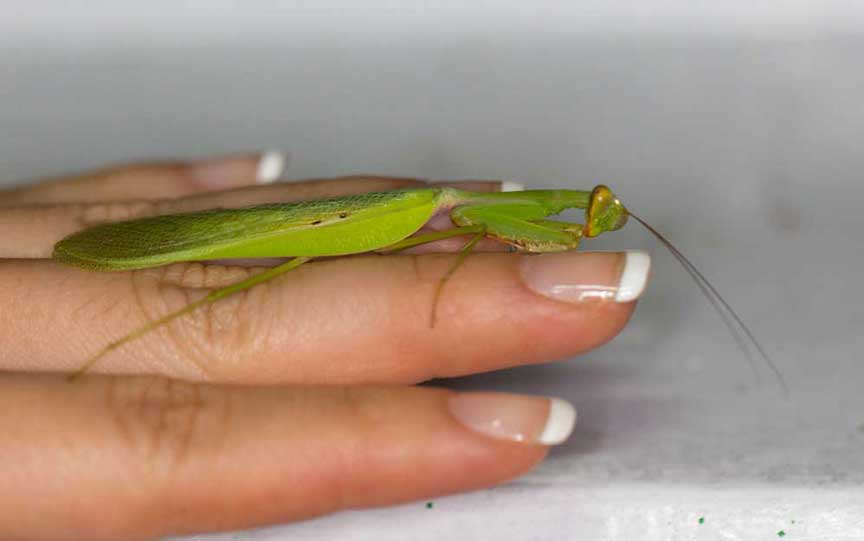 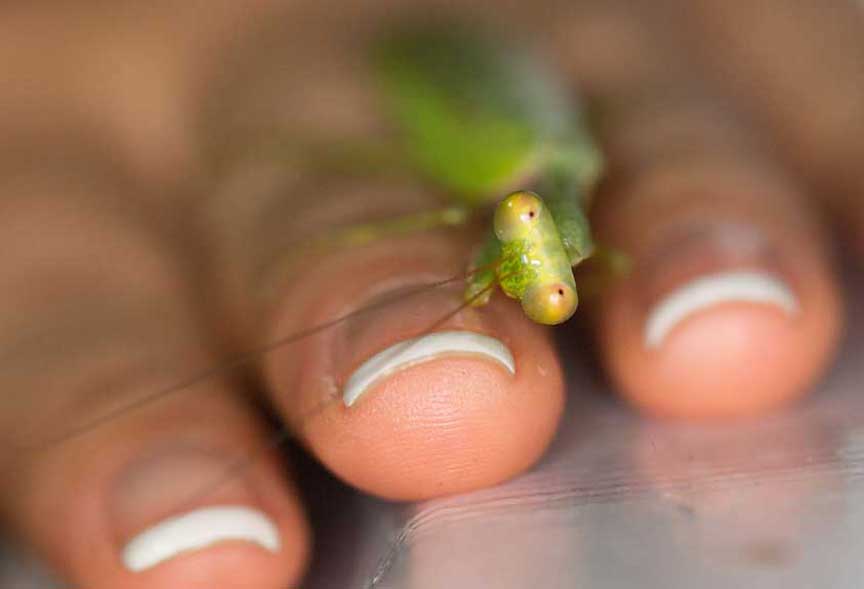 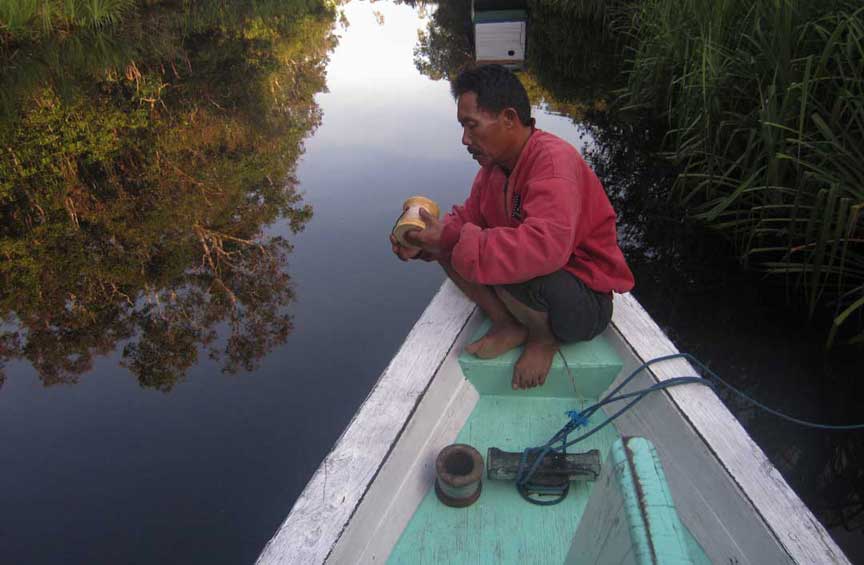 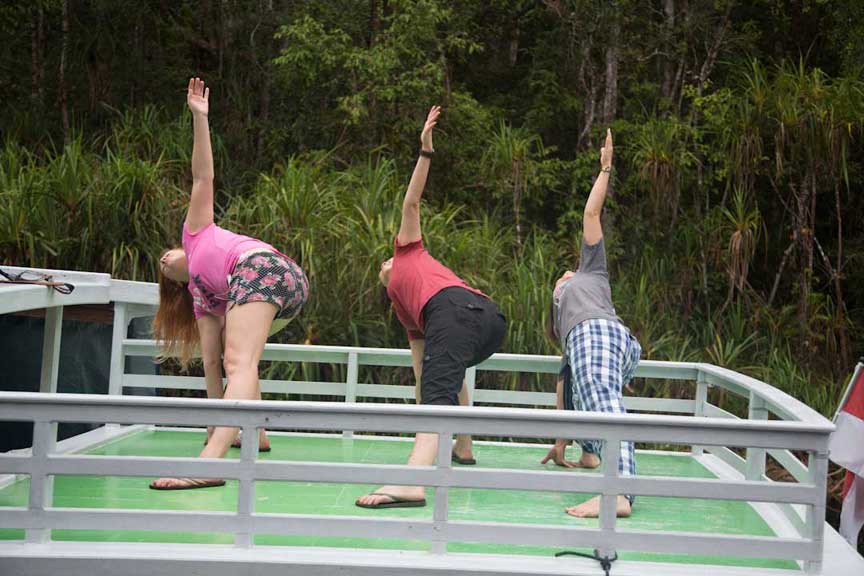 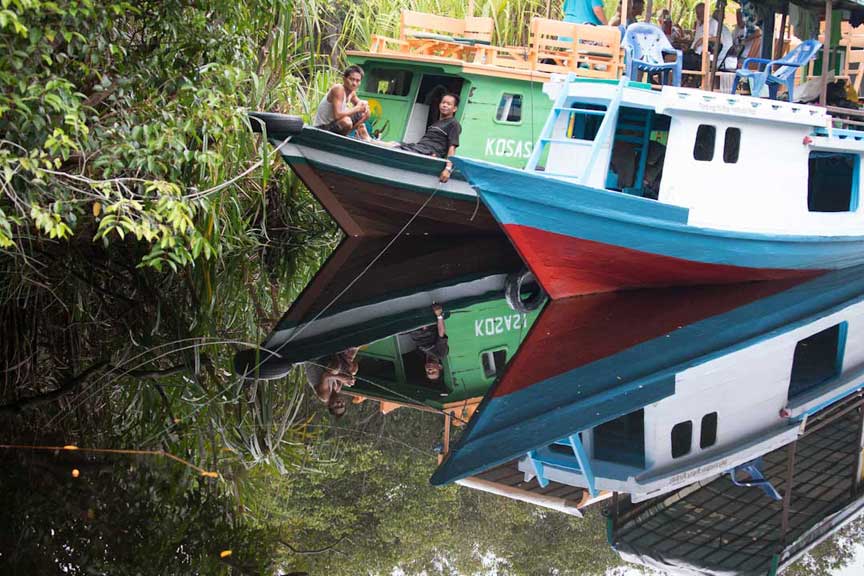 Its interesting to be in a rain forest in the early morning, seeing the mist, and listening to the hoots of the gibbons 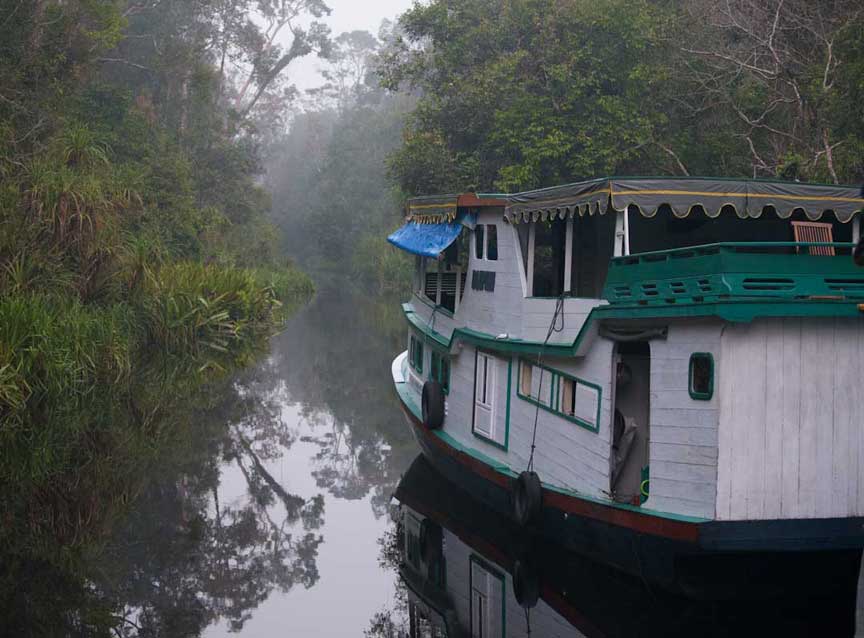 Other klotoks were returning from Camp Leakey as we proceeded upstream 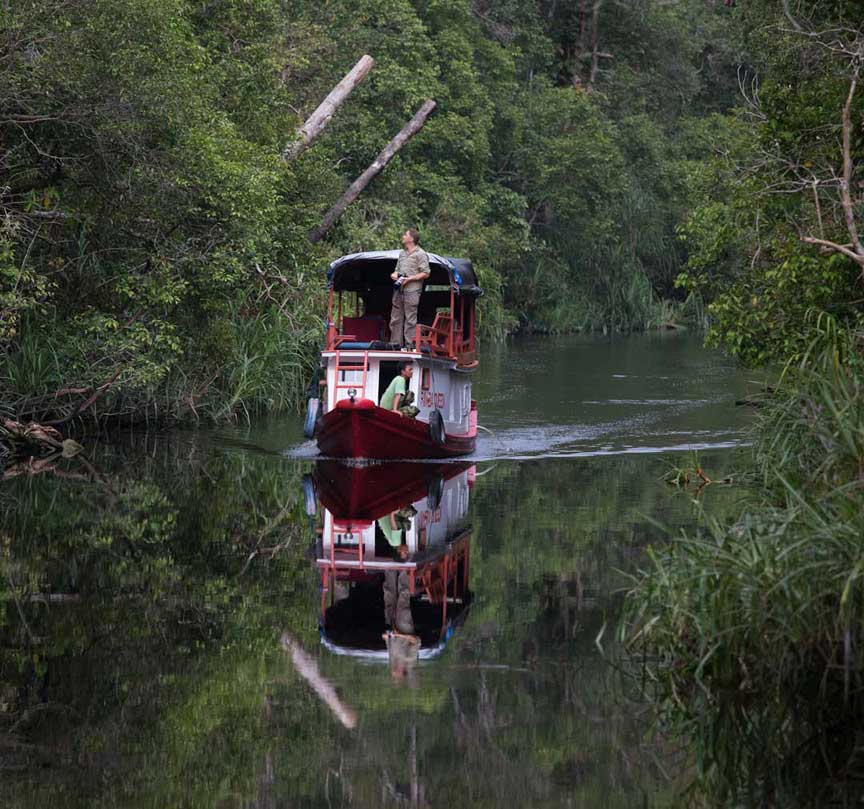 The river narrows significantly as you approach Leakey 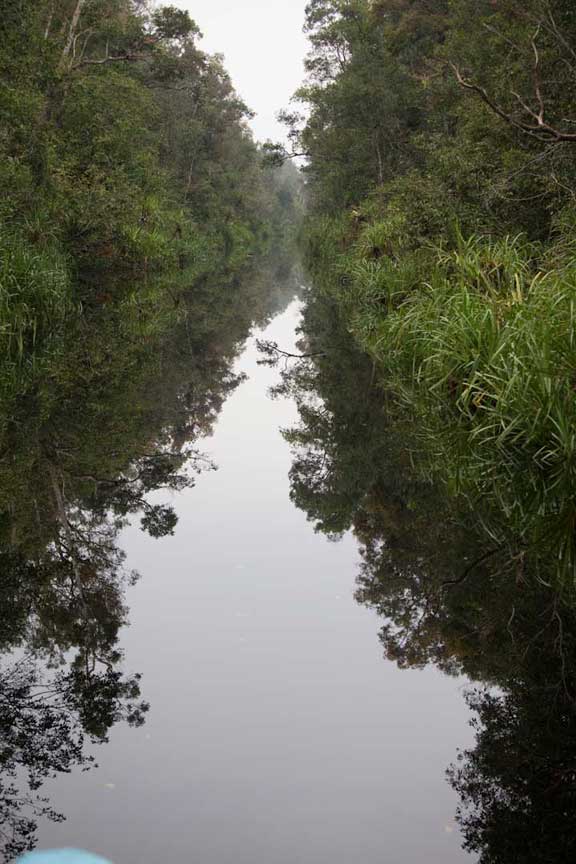 Camp Leakey! Hard to believe I was here 21 years ago to the month. Click on the photo below to learn much more about Camp Leakey 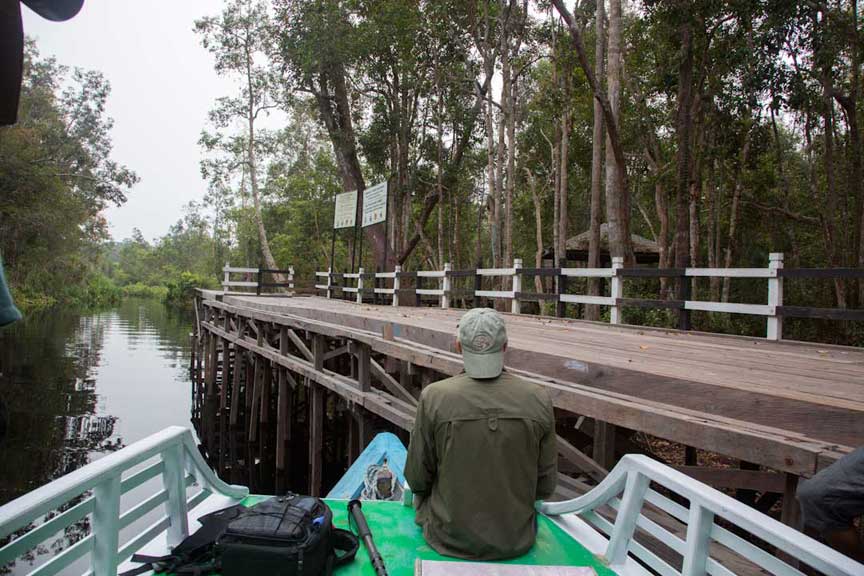