Home•Lions of Tsavo
Previous Next

In September of 2005 Dr. P joined an Earthwatch group headed by Dr. Bruce Patterson of the Field Museum of Natural History in Chicago. His team helped gather research data on the maneless lions of Tsavo National Park in Kenya. These lions are the descendants of the lions that killed 140 railway workers in Kenya in 1891.

Tsavo is a huge National Park in Southeast Kenya made up of two segments, Tsavo East and Tsavo West. Technically, our research poject was located in a private reserve called Taita Ranch located in between the two Tsavo segments.

To get to Africa from the U. S. most airlines connect through a European city. Dr. P used British Airways through London on a 10 hour flight landing at Heathrow airport. Heathrow is mammoth, and is truly an international airport. You will see airplanes from all over, especially Asia and the Middle East.

After an overnight in London there is an 8 hour flight to Nairobi. Upon arrival in Nairobi at 9 PM we went directly to the Fairview Hotel. It goes back to the colonial times and is quaint and comfortable. Security is an ever-present part of life in Nairobi. 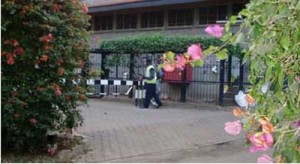 The next morning you join your Earthwatch group for the 7 hour car ride down the Mombassa Highway to Satao Camp at Tsavo. This ride is probably more dangerous than being in the bush with the wildlife. The road is poorly maintained in most areas, the traffic is bogged down by the number of trucks going to and from Mombassa, and there are overturned trucks and problems all along the highway. It was par for the course to drive on the shoulder as we passed an overturned truck or some other obstacle. The pollution from the trucks is not something we are used to.

Voila! After days of travel we finally made it to our camp called Satao. It is literally built on a rock outrcop, and offered a great view of the bush and a local waterhole. There were permanent tents, hot showers, and our own personal kitchen built into the rock. 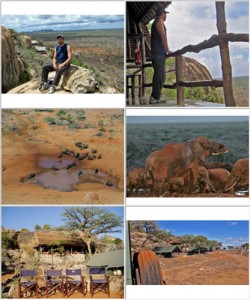 We stayed on a vigorous schedule for our two week stay. The first week we observed lions and wildlife from 4 PM – 8 PM, then again from 10 PM – 2 AM. The second week we kept the 4 PM – 8 PM run, but in the evening we did a 3 AM – 8 AM run. Needless to say we were exhausted at the end of our stay (and we actually paid to go through this?). 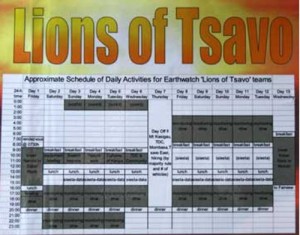 So, every day at 4 PM we climbed into our open Land Rovers and bounced our way through the Africa bush until dark. 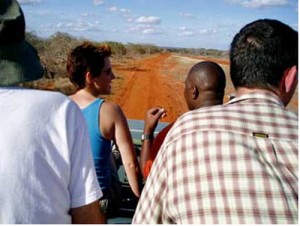 Everyone had a job to do for an hour, then we rotated to a new job. Here is Dr. P taking a break from his telemetry tracking of radio collared lions.

One morning after the 3 AM to 8 AM run, somebody went to Starbuck’s for our morning java fix. After a long day (or was it night?) in the bush we came back to nice hot meals, then off for a nap! 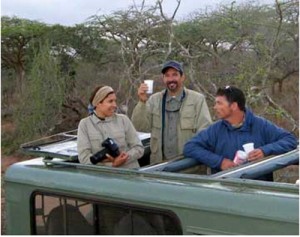 To keep the wildlife out of camp our security fence was some large tree trunks strung in front of our campsite. It was called “the psychological barrier” for the wildlife because it wouldn’t hold back much of anything. This is a view of the barrier in the daytime and on a beautiful night with the lights of the camp on the barrier. Luckily we had an armed guard on call all through the evening. 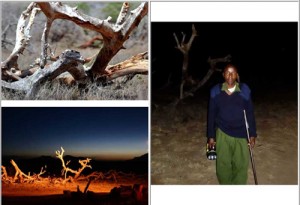 This is what we came for, the maneless lions of Tsavo! Since lions are mostly active at night in this area this is the first view you get of a lion. Our million candle power light reflects off an area in the back of the retina called the tapetum lucidum. It is this structure that enhances night vision for animals. A little flash added to the scene verifies it is a lion, but you could tell from the picture on the left of course, couldn’t you. 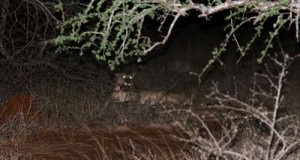 We have much more to show you about the camp and our research. If you follow this link you will see nocturnal Africa at its best, and learn how we observed and sedated lions while observing the African bush up close and personal. When you are finished come back here and we will continue on to the wildebeest migration.

After 2 weeks of hard labor (oops, I mean research) at Tsavo we took our last pictures and headed off to the Masai Mara to see the tail end of the wildebeest migration 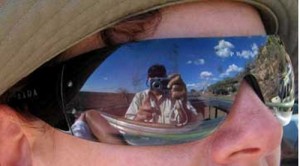 We flew from Satao to the Mara, via Nairobi, on one of those bush planes you see in the movies 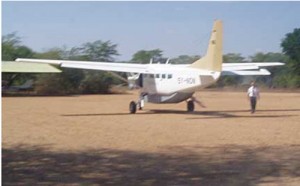 We never got a good view of Kiliminjaro from Satao camp. We made up for it on this flight. 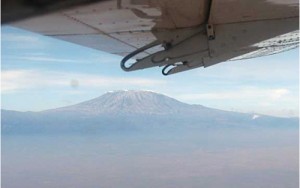 We stayed at the Mara Bush camp at the far north end of the Masai Mara. It was a very comfortable tented camp with all the amenities and then some. This is the way to see Africa! 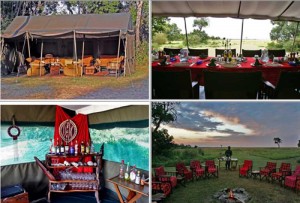 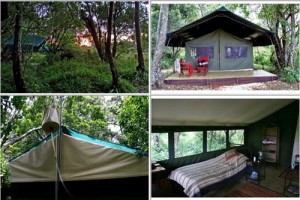 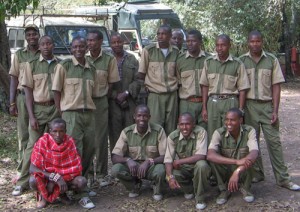 The Masai were our camp guardians, and would escort you to your tent from the dining room each night 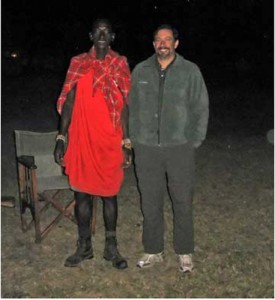 Paul and Gillian run the show and really know how to make you feel at home. They continually surprise you with their ambiance and class, and an occasional story or two. Hmm, I wonder if we really were eating what he told us it was.

A primary reason many people go here is to watch the wildebeest cross the treacherous Mara river as part of their annual migration. You never can predict when it will occur, so plan on spending several hours waiting, with numerous false alarms. Some people have elevated their waiting techinique to a fine art!

One day our big chance finally came. The wildebeest were congregating, the crocodiles were waiting, and our camera’s were ready (we even remembered to take the lens caps off)!

The congregation started milling around the water’s edge. Even the zebra were ready to go. 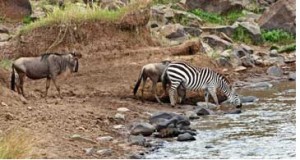 First to cross was a lone zebra mare 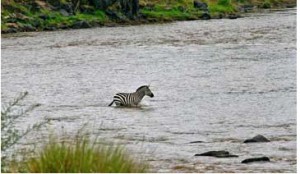 She made it all the way, right in front of a crocodile 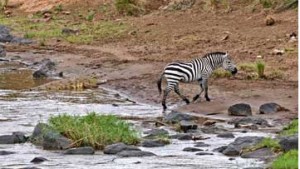 She then turned around and started ninnying towards the other side 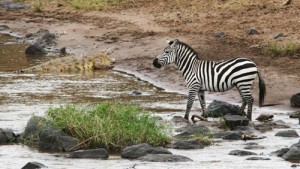 And believe it or not, after a few minutes she went back! 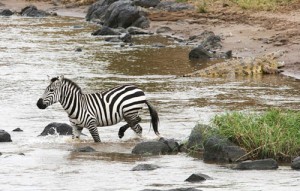 On the return trip she went much faster! 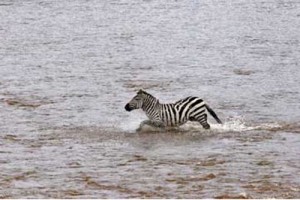 As it turns out, she had a foal that wouldn’t cross, so she stayed with the foal 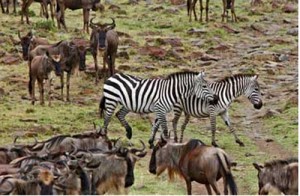 While all of this was transpiring the wildebeests just stood and watched. Those darn wildebeests had no interest in crossing whatsoever. So, our big chance to watch the spectacle did not materialize. Guess this means we have to go back soon….. 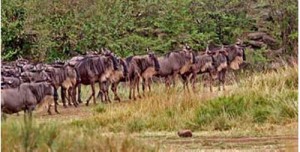 Several prides make the Mara their home, so if you enjoy observing lion behavior you have found your spot. Here they are, doing what they do best. 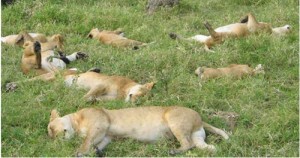 There are cubs to entertain you

And females on the prowl 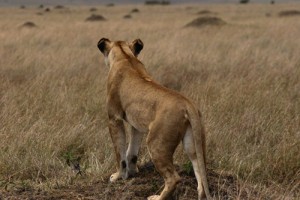 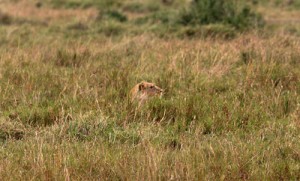 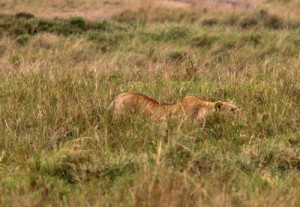 We have many more lion pictures, including mating lions….

The Masai are a fascinating people that live off the land. You will see them off in the distance tending their animals. Their primary possession is their cattle and goats. They live a very simple life in huts with their animals.

Almost everyone that goes to the Mara goes on a balloon ride. They leave very early in the morning to catch the currents. 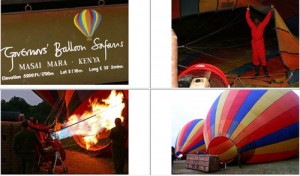 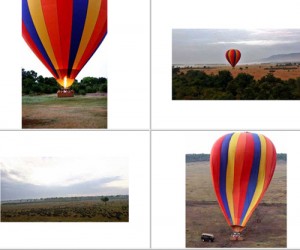 We leave the Mara with a nice sunset over the plains 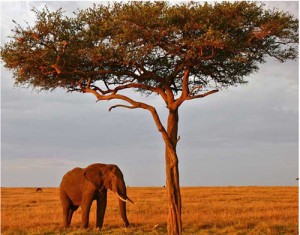