Welcome to the Falkland Islands

Home•Welcome to the Falkland Islands
Previous Next

Welcome to the Falkland Islands

Dr. P took Dr. K and two assistant photographers to tour the Falkland Islands (they should be renamed the Breezy Islands) on a three-week personal tour in January of 2018. Our tour guide was Georgina Strange, a Falklands native. She was trained by her father Ian, the man who wrote the book (actually ten books) on the Falkland Islands 40 years ago. She knows her stuff, and was our personal tour guide par excellence! We encountered warm and competent Falklanders that took us around and gave us front row seats to all of the wildlife that you will meet on this page.

Georgina has a company called Design in Nature that takes small groups on specialized tours around the island, teaching photography and the natural history of the area. We interviewed her in front of the house where she grew up (in between being chased by baby penguins).

It was such a good trip Dr. P is going back from Oct 17-24, 2020 (not 2019 like Georgina says in this video, the date had to be changed to accommodate the number of people that are interested in going) with a group to watch the ginormous male elephant seals up close. You will see why he is going back when you go through this page. It was penguin and marine mammal heaven!

As of March 1st, 2020, of the 18 spots set aside, just 4 are still available. The 14 people that have signed up are mostly from California, 3 are from Michigan, and 3 are from Hawaii. There are 5 veterinarians going, and there is room for 4 more veterinarians.

Dr. Marie Rush, a boarded zoo veterinarian (ACZM) will be speaking on exotics. The lectures will be cased based using her experience as a clinician and also her experience in imaging working for Antech Imaging Services interpreting exotic radiographs, ultrasound, and CT scans. Dr. Palazzolo will also be speaking on wildlife photography, web sites, and social media.

Pace yourself, this set of pages on the Falkland Islands has many links to a large number of photos and videos. Only few of the thousands of photos we took are on this page. They are downsized and in low resolution for easy downloading. 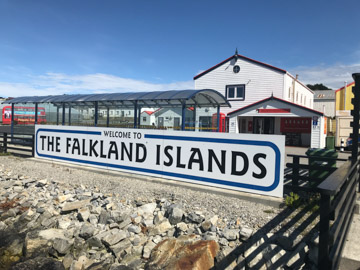 Our welcome to the island at Stanley harbor 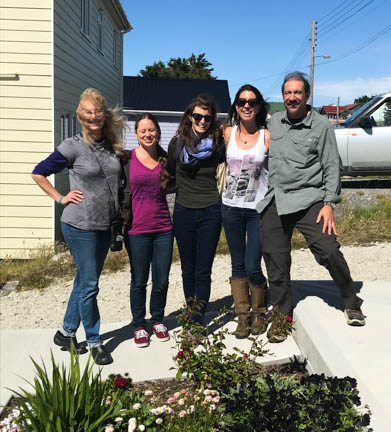 Our group, after several days of traveling to get there. We look pretty good after all that traveling! We have two Michiganders, two Californians, and one Falklander in our group of peeps. 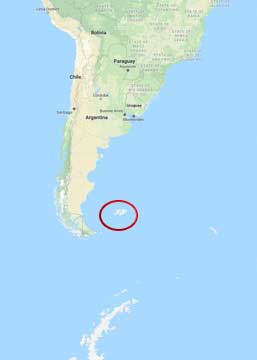 The Falkland Islands lie 3oo miles east of the tip of Argentina. We went in late January, which is their summer since they are south of the equator. Temperatures ranged from the high 40’s to the low 70’s. 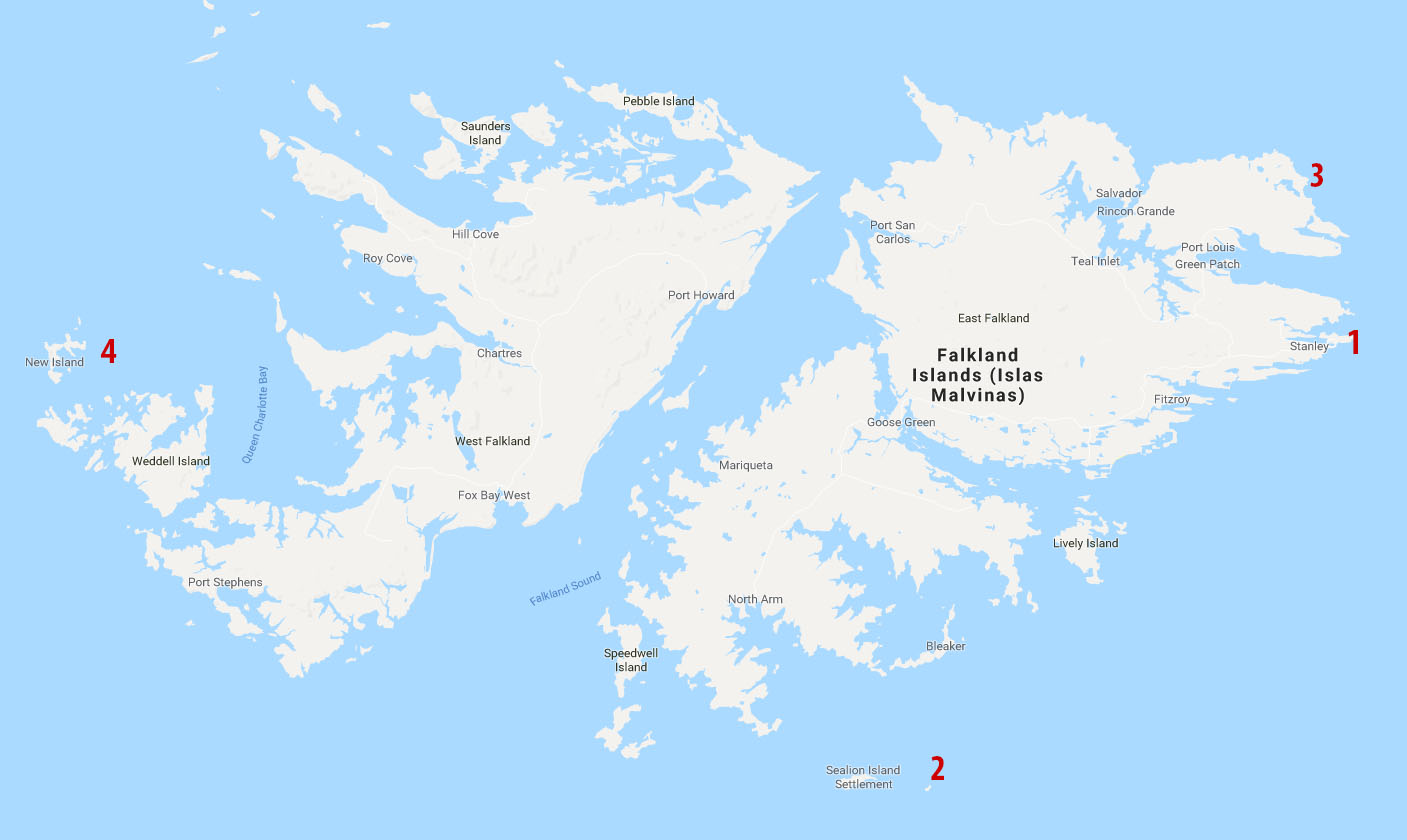 Here are the four locations we visited:

Stanley is a quaint little town that contains most of the 3,200 that live in the Falkland Islands. We stayed at a wonderful bed and breakfast called the Pale Maiden. 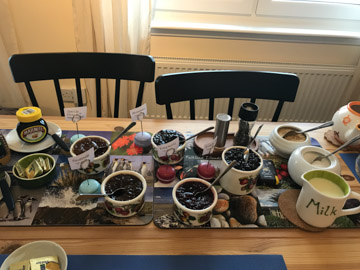 We started the day with full tummys after eating  the gourmet and fresh food Teresa made for us every morning. It was a great way to start the day. Dr. P told Teresa that she was the Martha Stewart of the Falklands. She wasn’t sure what that meant, and had to call her daughter to find out that it was a compliment (we never told her Martha went to jail!). 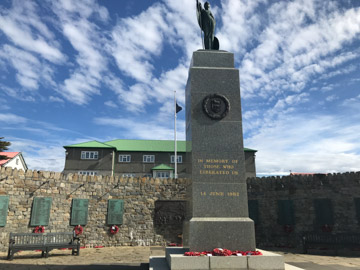 There is a large monument to the people that died in the war with Argentina in 1982. Even though the British won that war, and don’t plan on leaving any time soon, there is still some animosity between the two countries. 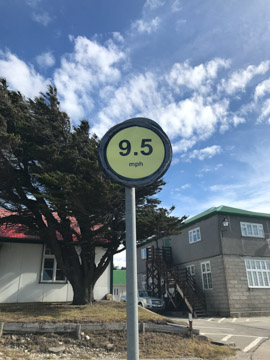 Walking around Stanley we got a kick out of some of the signs, like this interesting speed limit sign limiting speed to 9.5 mph. Leave it to the Brits! 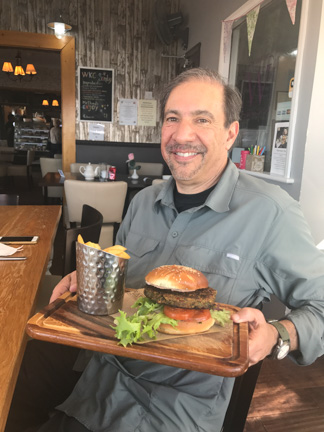 We ate at a wonderful restaurant in town called the Waterfront. This is the bean burger. Dr. P  forbade anyone from taking pictures of him trying to eat it. 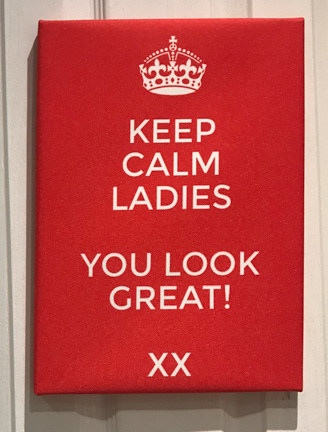 We love the British sense of humor. This is a sign at the entrance to the ladie’s room at the Waterfront. 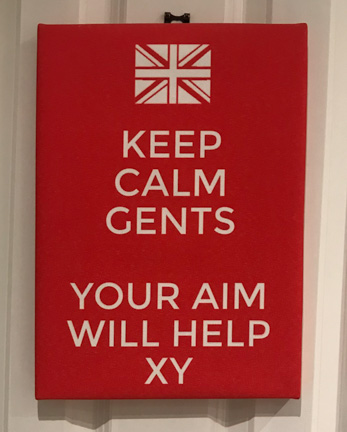 And now the men’s room 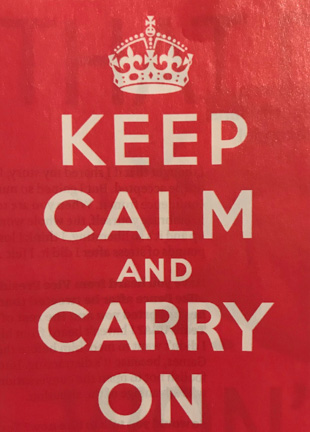 These signs have historical significance. They were used during World War II to help the British people withstand the bombing of London from the Germans.

After a night in Stanley we flew on the Falkland Islands Government Air Service (FIGAS) airplane to Sea Lion Island. You find out what time your flight is leaving the night before when they announce it on the radio. They do this after the weather report, and after they tell you the ultraviolet radiation index for the sheep for the next day! It’s all part of the quaint Falklands experience.

Here is the announcement

The FIGAS pilots are very experienced, and flew low over the water on the way to Sea Lion Island to help spot whales. If they see one they will circle over it to get a good look.

Landing on Sea Lion Island in a BN2B Islander airplane 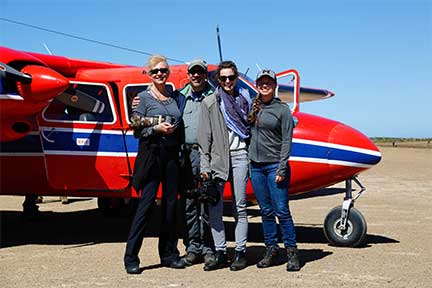 We made it to Sea Lion Island!

At Sea Lion Island we were literally in the middle of Gentoo, Magellanic, and Rockhopper penguins, along with Elephant Seals, Southern Sea Lions, and Imperial (King) shags (cormorants).  This is the place we are returning to in the late fall of 2020 to see the large elephant seals do their thing. 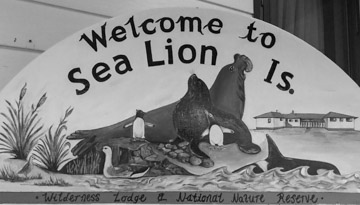 We stayed at a very nice lodge on the island that was located in the middle of the wildlife. In the video you get to meet cardboard Rocky for the first time. 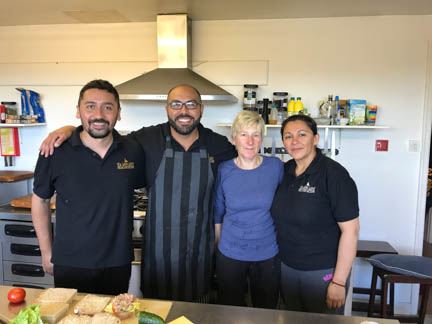 The staff was great, and accommodated us with all of our dietary and personal needs 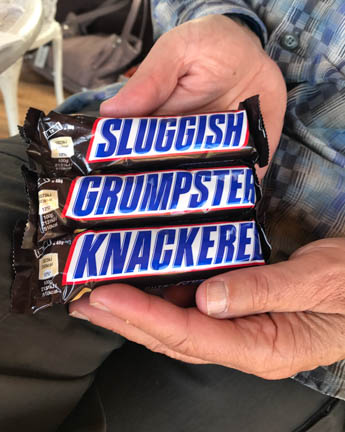 On one unusually calm day we went hiking to see the huge Southern Sea Lions. We decided to make a video with Georgina explaining their behavior while sitting on a cliff above them. It was a great opportunity to do a field interview without the wind interfering. 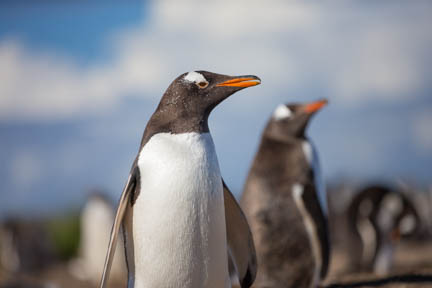 The lodge is a 5 minute walk from a gentoo penguin rookery. Click on the photo to see some of the way-too-many photos we took of them (we couldn’t resist) as they went fishing, fed their chicks, and waddled right up to us. There is nothing more entertaining than a penguin! 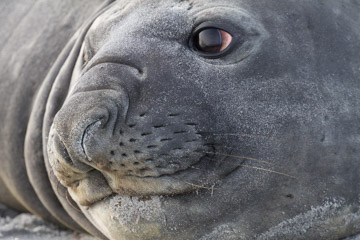 The juvenile elephant seals are molting and resting after months of feeding. Click on that cutie’s face above and watch them as they spar with each other in preparation for when they go from their current 2,000 pounds, to 8,000 pound beachmasters in a few years. This is when the males fight for control of a harem, and will be on the focus for the October 2020 trip. 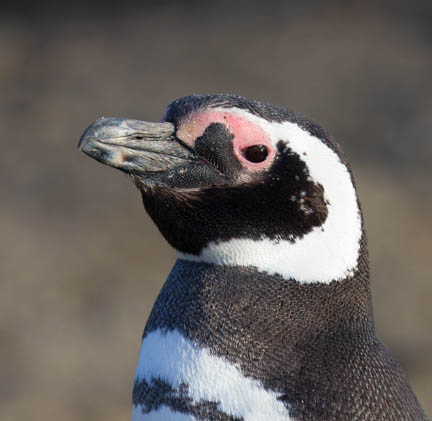 There is a reason they are also called “jackass” penguins. Click on the photo and see a some of their antics. 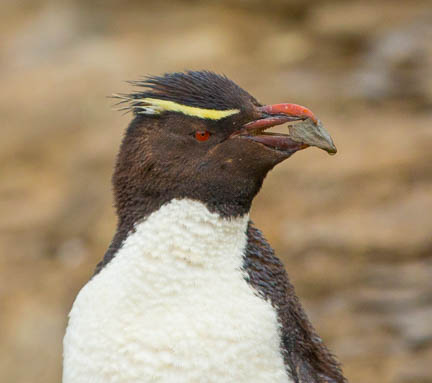 They are nothing short of amazing as they climb high cliffs by jumping on the rocks with their stubby legs. This Rockhopper offered Dr. P a rock-how appropriate for a bird with “rock” in its name! This section shows how amazing they are. 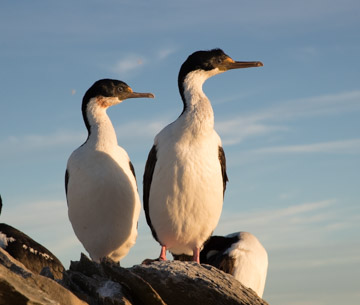 They posed for us whenever the camera was pointed at them. In this section you can see them as they come in for what is best called “an uncontrolled landing”.

After Sea Lion Island we went to Volunteer Point to see the King penguins. But first, we had to get off Sea Lion Island. The expertise of the FIGAS pilots with their BN2B Islander airplanes was apparent, as they came to get us right on time, and off we went to our next destination. 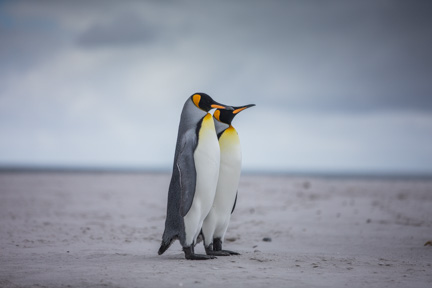 They look like they are little people wearing tuxedos as they stand at attention. Learn more about them in this section.

After Volunteer Point two members of our photography team flew home, after a final toast to the Falkland Islands, of course.

After they left,  Dr. P, Dr. K, and Georgina flew to the island where Georgina was raised. It was here that her father taught her the extensive knowledge she has of the area. It was a special part of the trip, since tourists routinely do not go on this island.

To get to New Island in the far west of the Falklands we needed to take a plane and a boat. The boat was captained by Jerome Poncet, a 72 year old French gentleman with an extensive knowledge of sailing these waters. Any professional film crew, like the BBC or National Geographic, hires Jerome to take them around.
We spent a week on New Island and stayed at a small house that Georgina grew up in. Not only is she an outstanding guide, she is also a mean chef, and cooked up quite the spread! 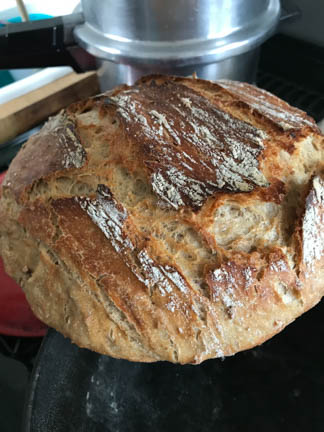 Her homemade bread was delicious

In the links below you will learn what it was like to sail with Jerome, see the Rockhoppers that risked their fins every day in the rough surf finding food, watch the graceful Black-Browed Albatross as they soared overhead, and a get a front row seat to watch a special sea lion that has a taste for penguins. We end with the quaint museum at New Island, and then some photos of us in action.

Sailing to New Island with Jerome

The museum at New Island

How we got the photo

Return to the Wildlife Photography page.