GRAPHIC PHOTOS IN THIS PAGE NOT SUITABLE FOR ALL AGES

All photos are in low resolution saved as jpeg medium compression. Click on them to see them in greater resolution.

They were taken with (unless otherwise noted):

In the late afternoon we came across a family of cheetahs that consisted of an adult female with her four offspring that were a year old. A female cheetah with her offspring needs to hunt at least daily because she has 5 mouths to feed and she tends to hunt the smaller plains animals like gazelles which is not a big meal for all of them. It is unusual for one adult female cheetah to hunt prey that is larger than gazelle, so we did not think much of what they were doing by looking at the relatively large wildebeest 300 hundred yards ahead of them.

At first it did not look like they were very serious about hunting. The mother is on the right. 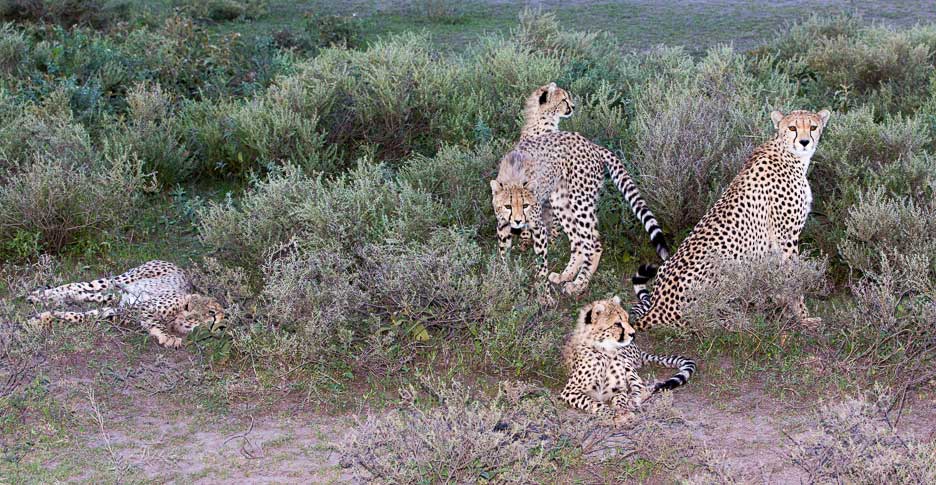 In short order they were on the alert, with the youngsters leading the way and their mother staying back. This is unusual because the youngsters are not experienced hunters and usually end up just scaring their prey away while their mother is patiently stalking. Within a few seconds the youngsters took off in a cloud of dust as our guide Firoz drove us closer to the action. It happened so fast we were caught off guard initially.

You can see the young male cheetah at the far right jumping onto something. He was the most aggressive of them, and initiated most of the contact with the wildebeest. 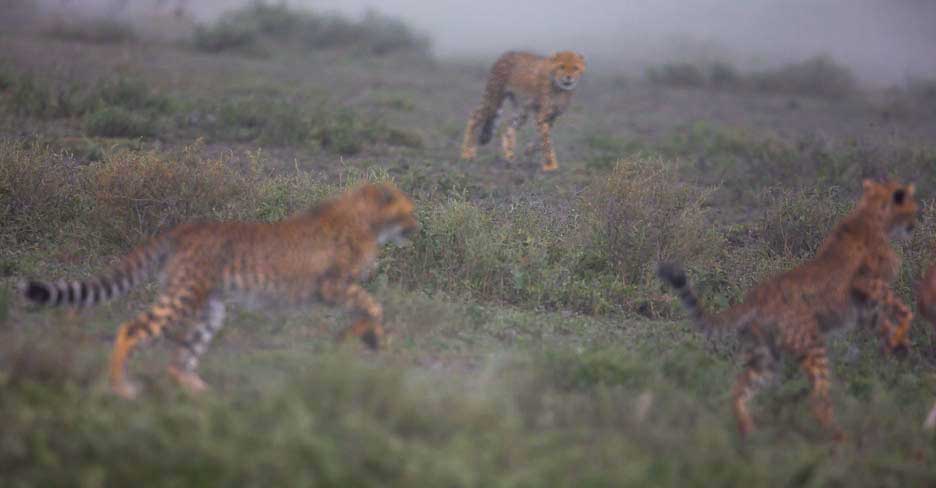 He grabbed a wildebeest calf and attempted to take it down in full view of its mother. We don’t know why they singled out this individual calf. It must have had something wrong because even though it is only a few days old it can run fast enough to stay away from danger, especially from young cheetahs that are inept hunters at this age.

One of the cheetahs chased the mother off, and what transpired next is 30 minutes of these inefficient young cheetahs literally mauling this wildebeest calf to death.  The mother cheetah only watched and did not participate at any time. It was strictly a learning experience for her cubs. It shows how brutal nature can be to bring all that beauty we see. This “survival of the fittest” has been going on long before we were around to watch and capture on our cameras.

Most of the time a specific male, facing us, did most of the work, with the other cheetahs jumping in on occasion 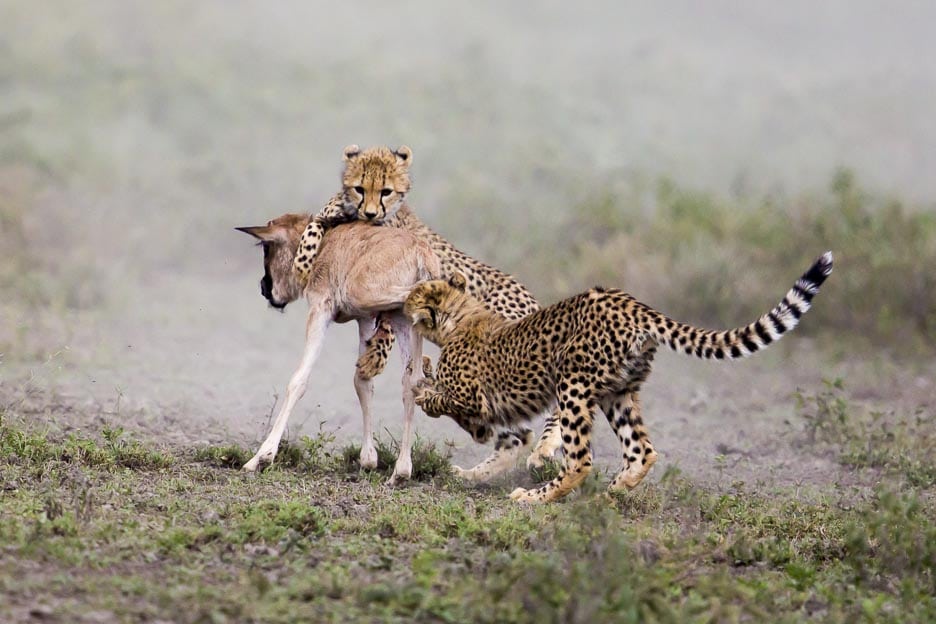 The calf put up a super valiant effort, and got out of their clutches many times in an attempt to get away 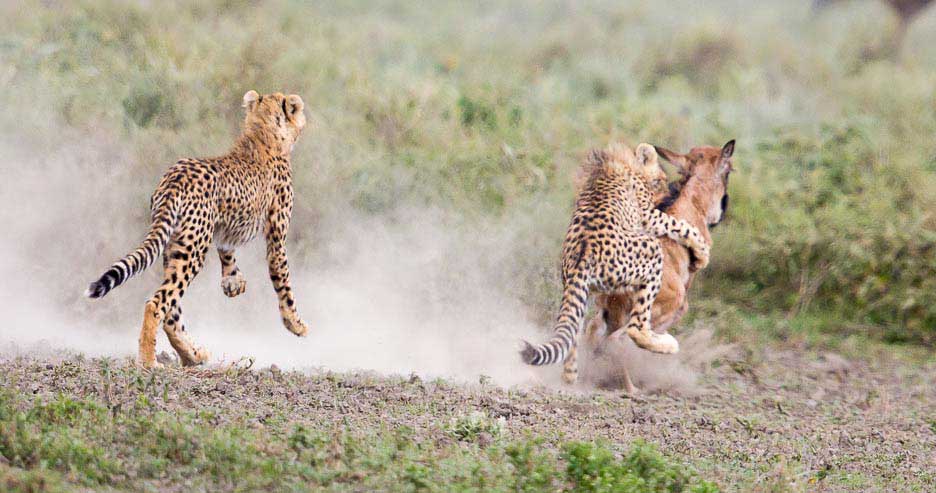 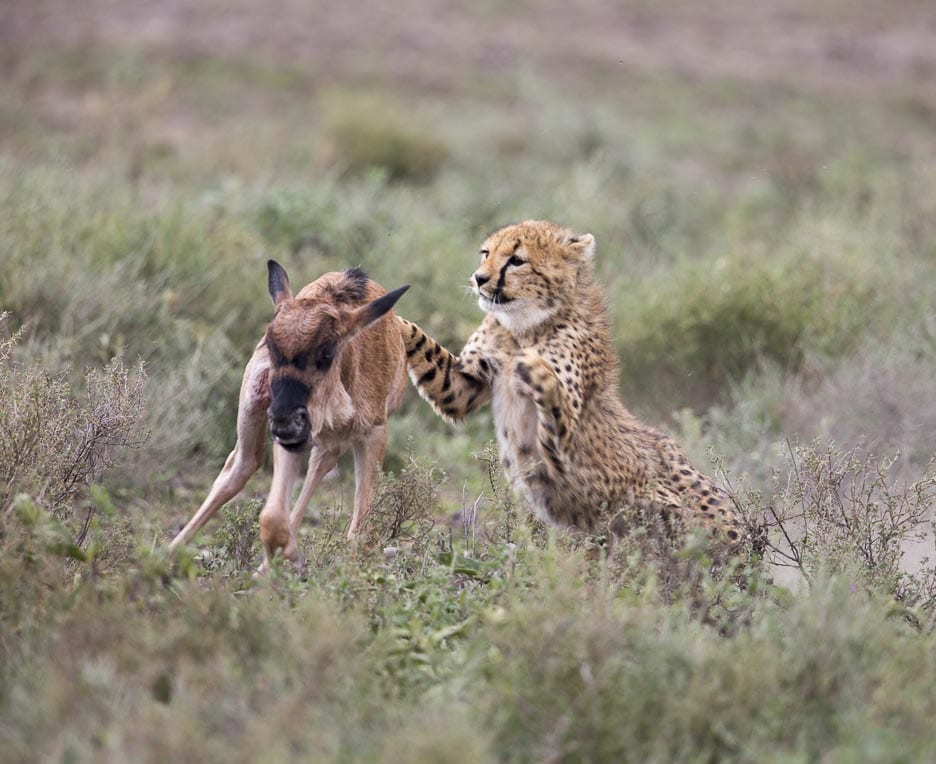 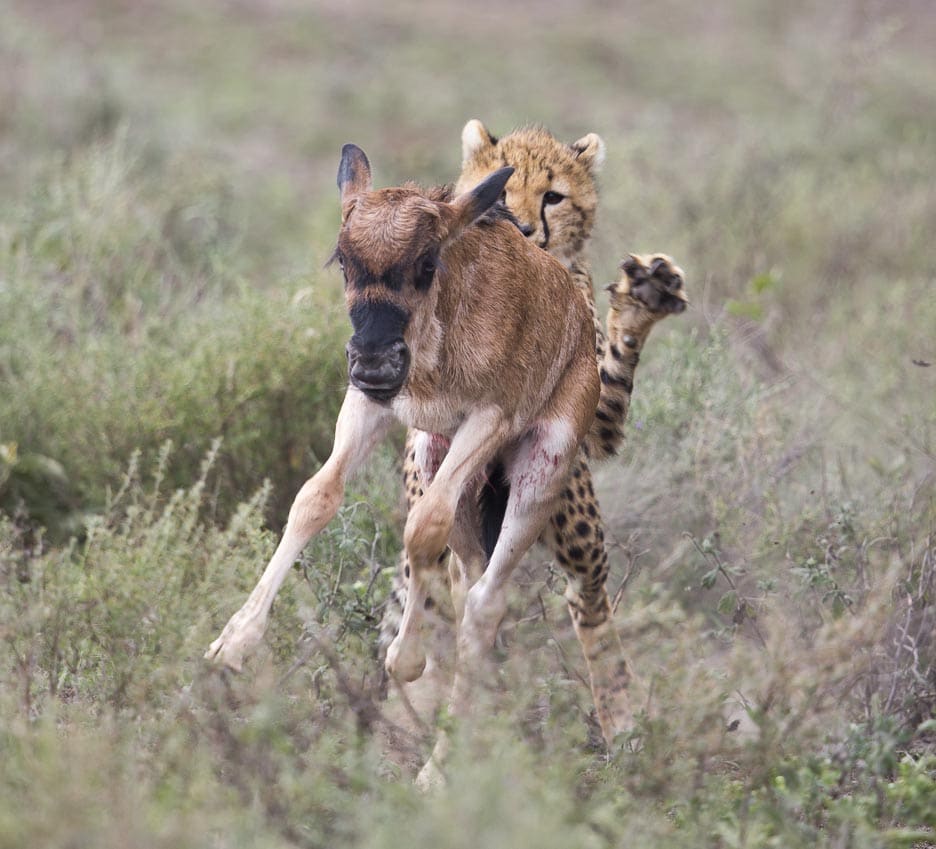 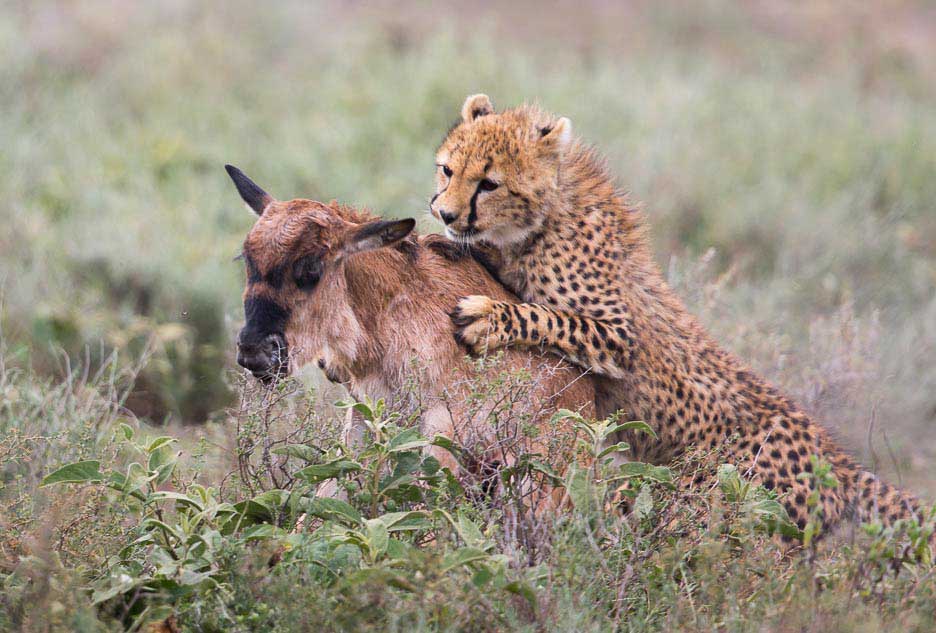 The male cheetah kept biting the calf on the top of the neck. It needs to bite at the throat to give the quick kill, a skill it still needs to learn. This lack of skill prolonged the calf’s demise. 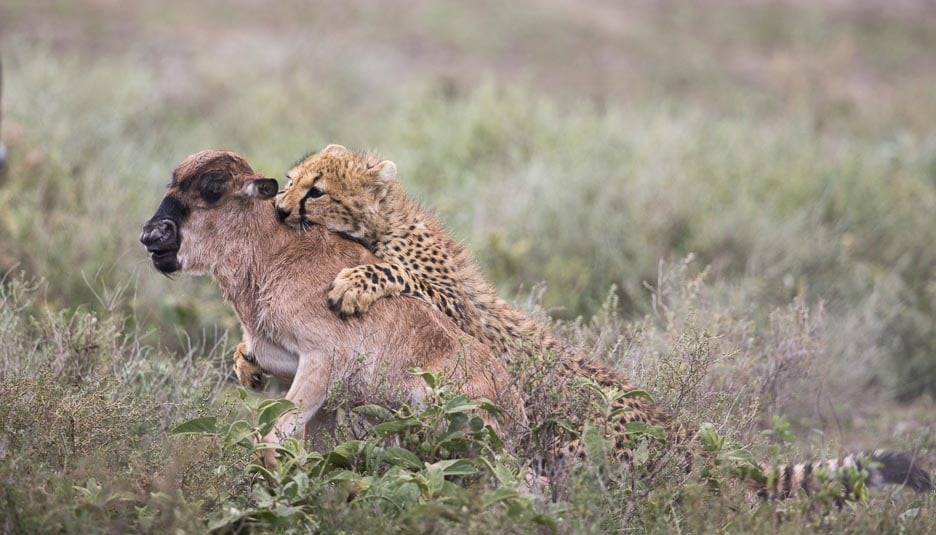 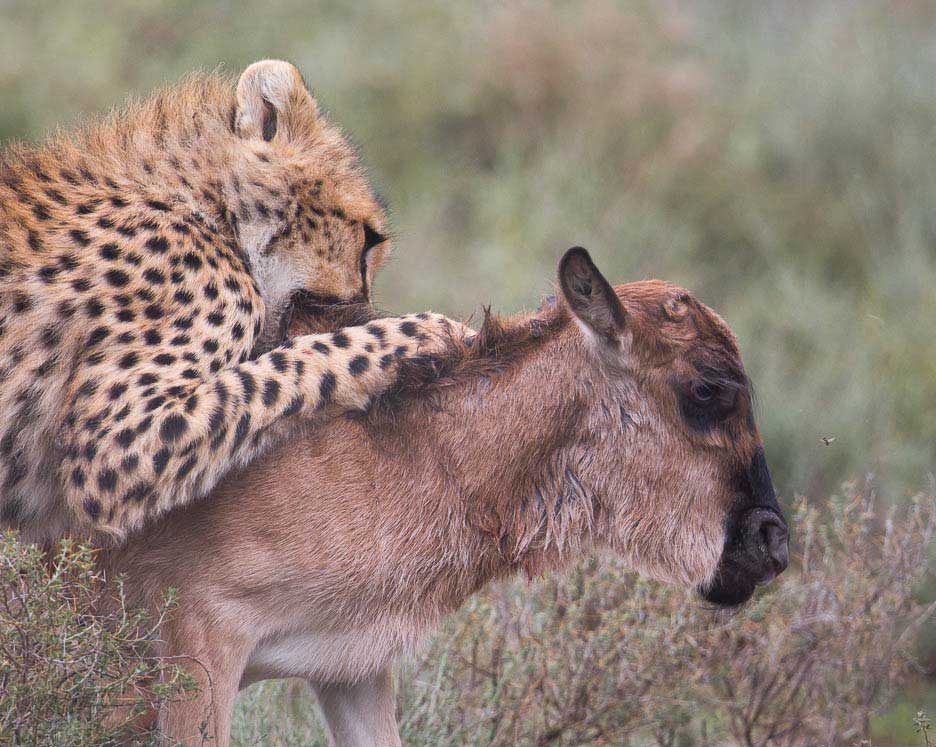 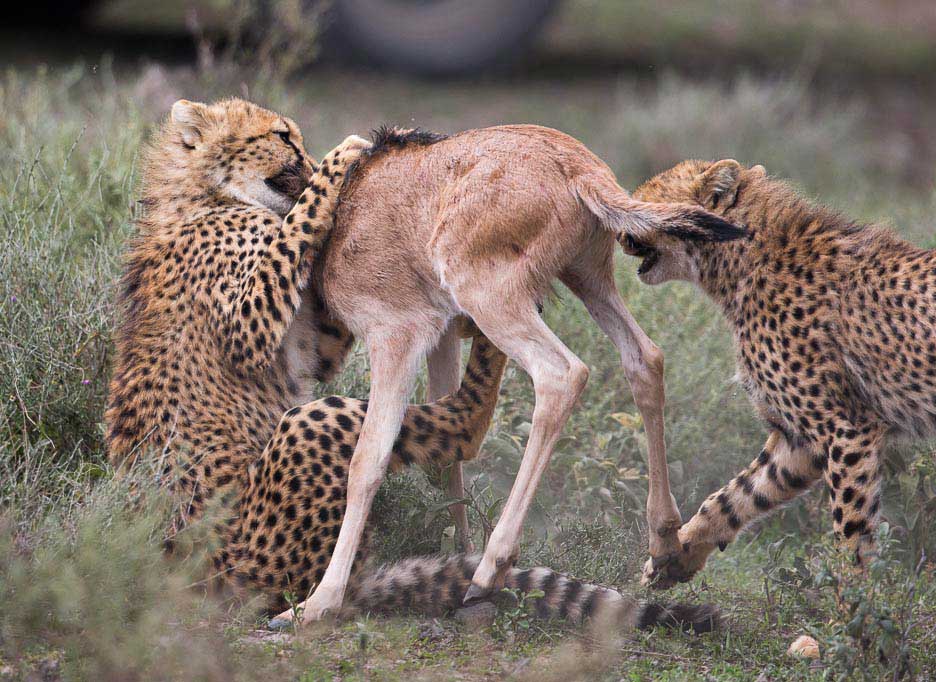 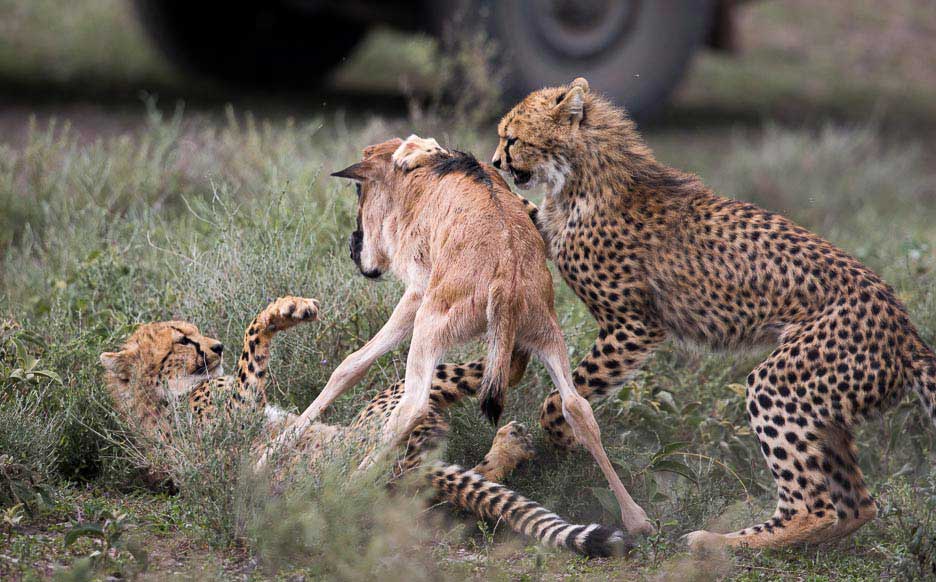 The calf was amazingly resilient and kept trying to elude them 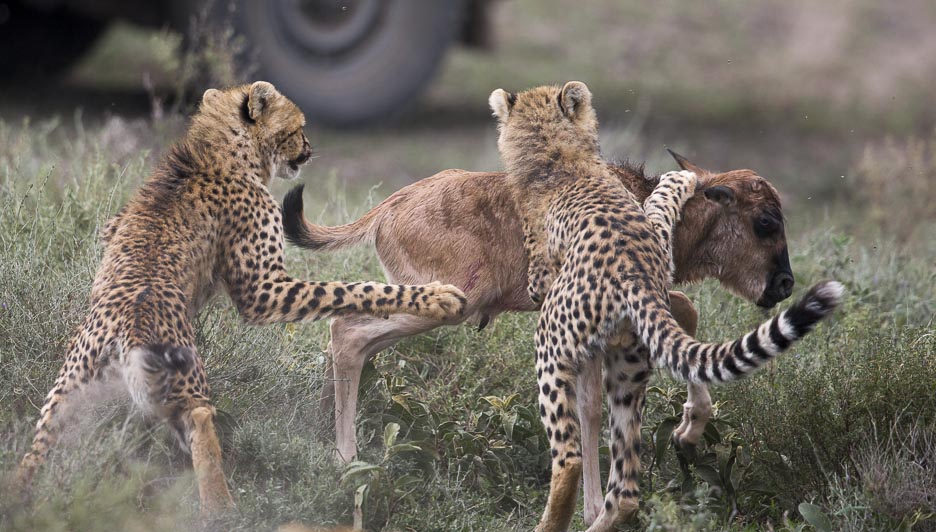 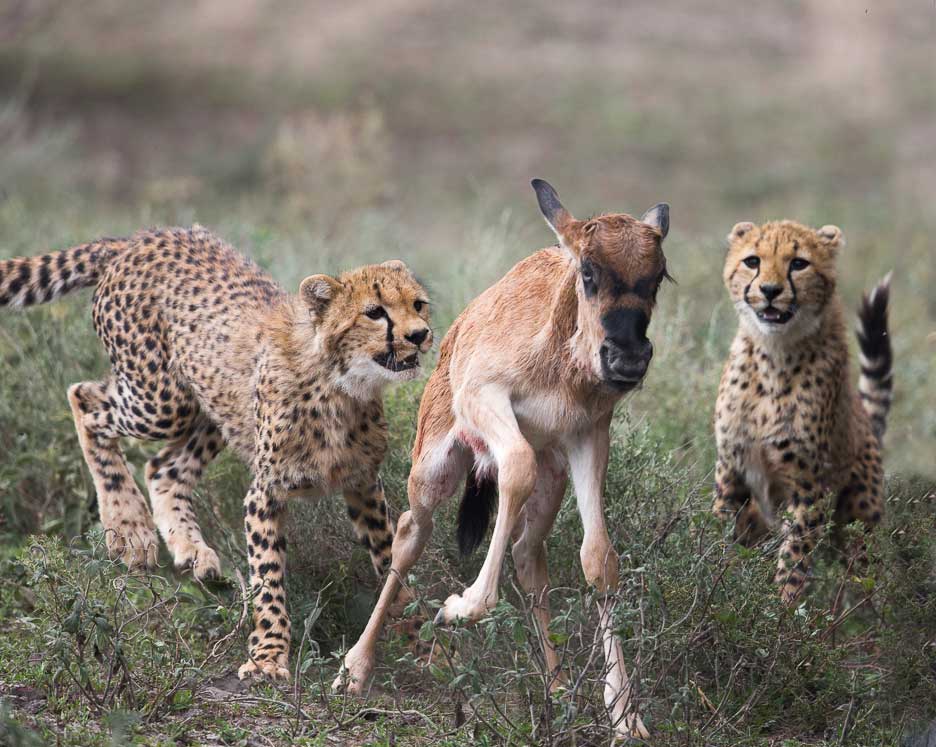 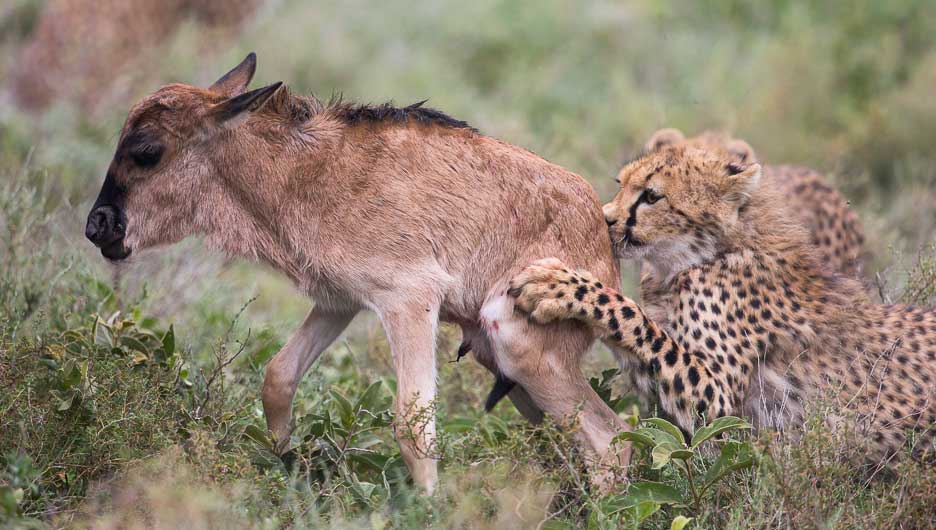 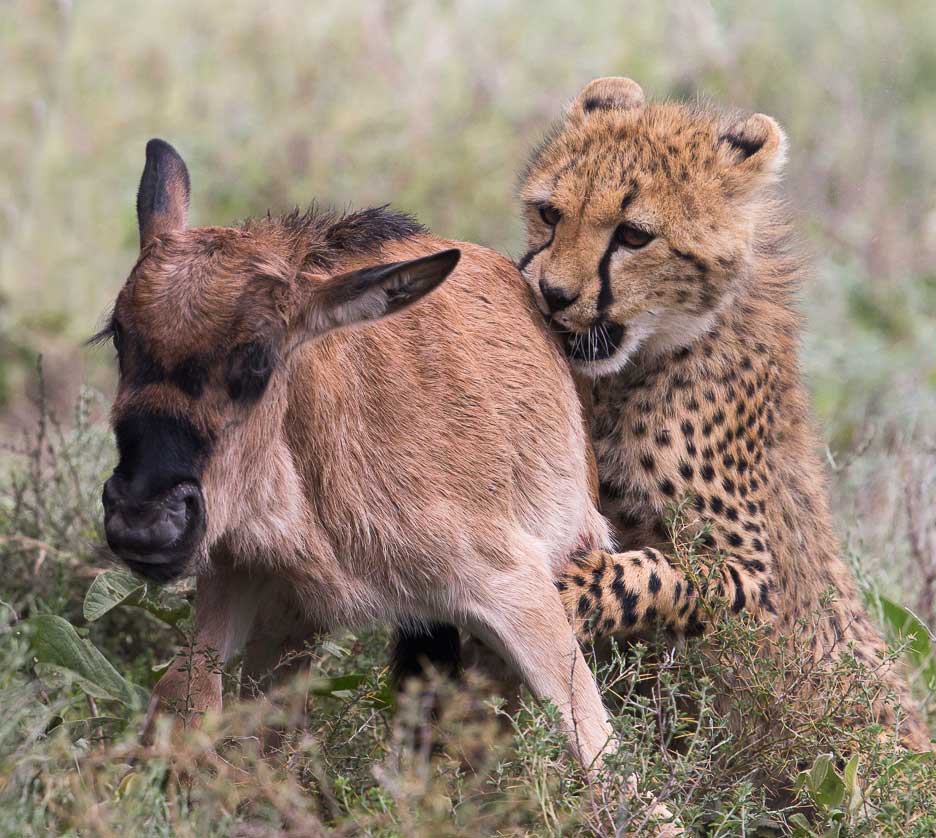 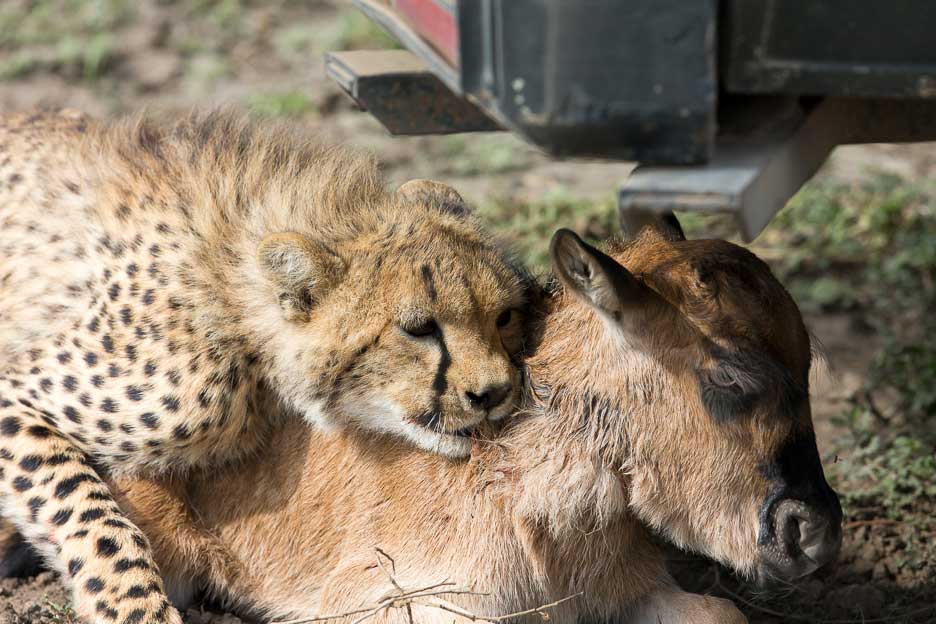 Eventually the male cheetah applied the throat bite. You can see the mother cheetah standing behind him 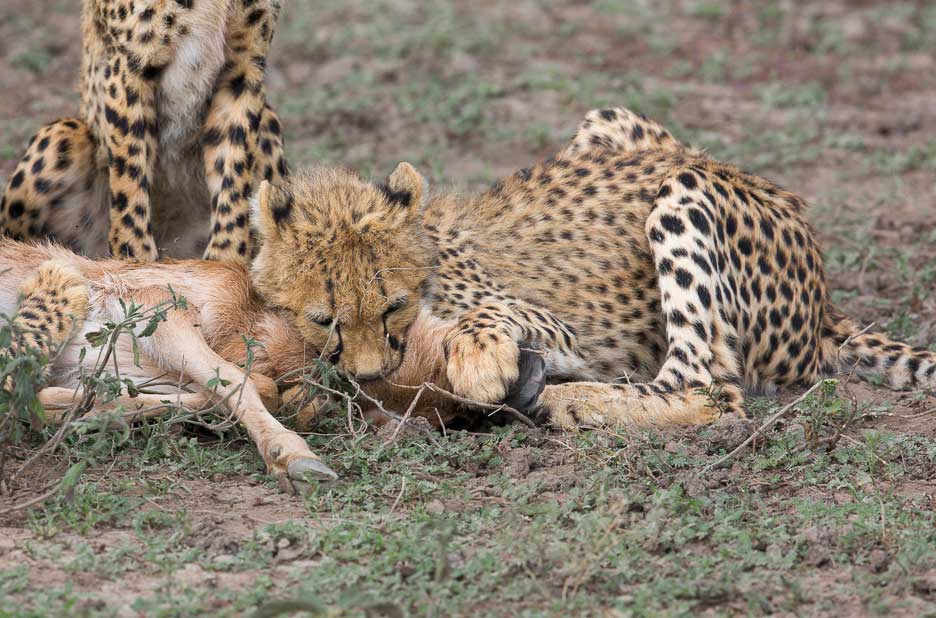 The mother cheetah never interfered, and kept scanning for the appearance of lions or hyenas. They are attracted due to the length of time these young cheetah are taking to make the kill. 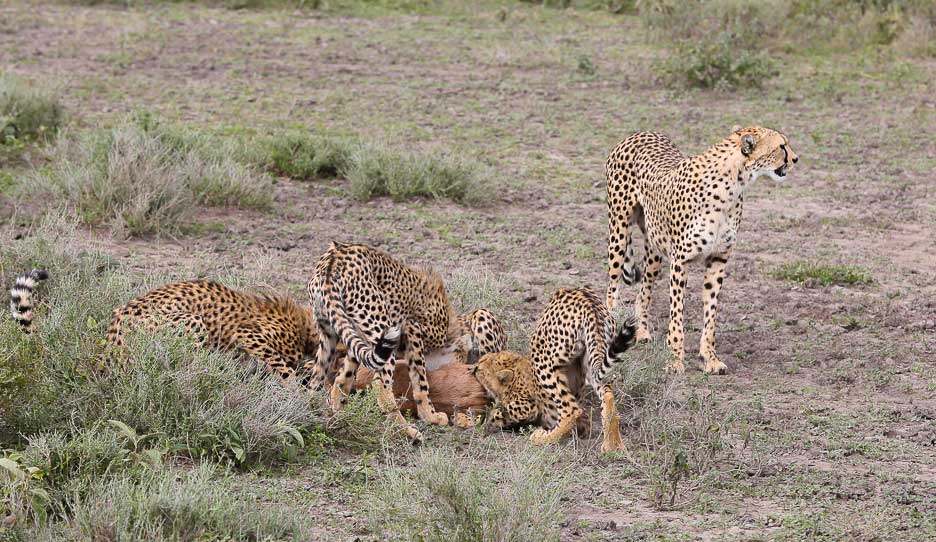 After even more escape attempts the calf finally died and the feast began for the exhausted cheetahs. This is not a lot of food for 5 of them, so they would have to hunt again soon. 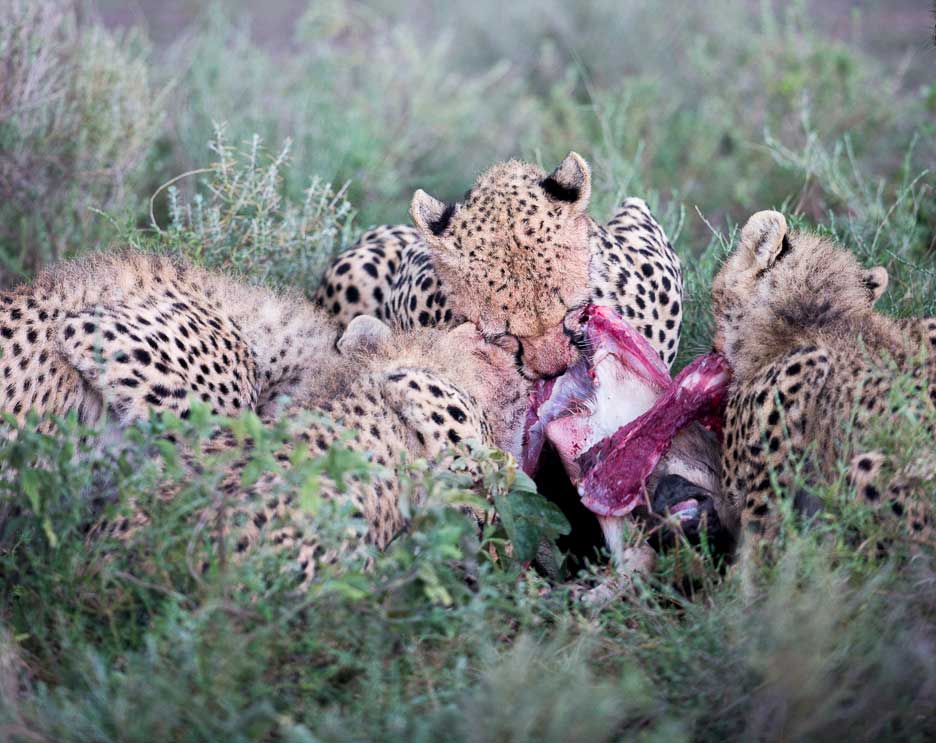 Even while feeding the mother kept a wary eye out for trouble. 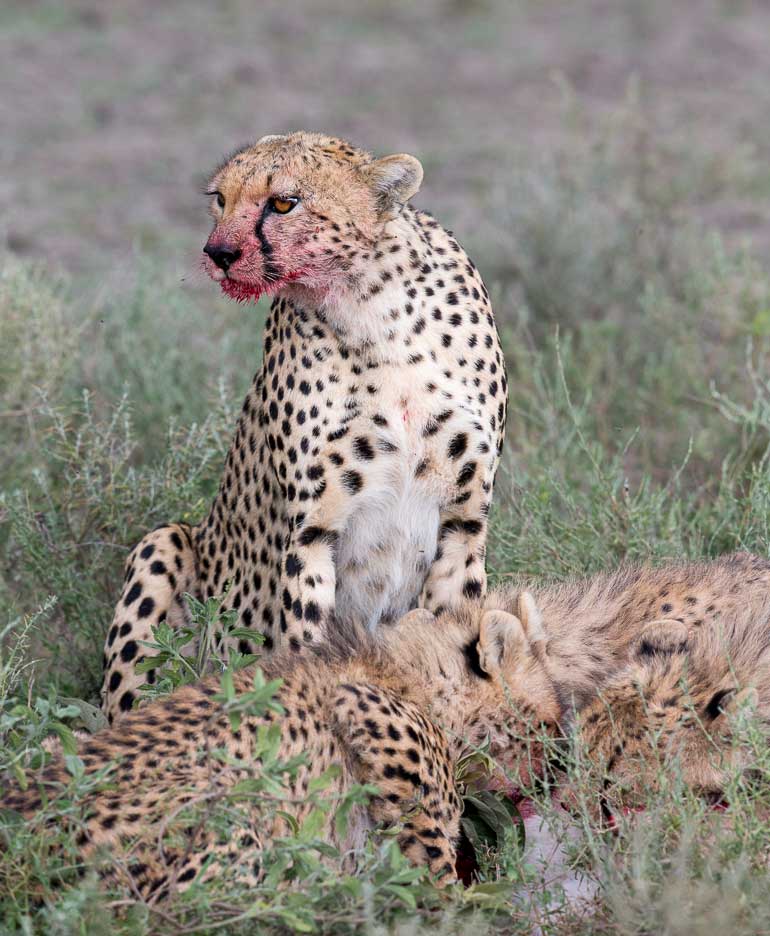 Return to the Photographers Africa page

Return to the Wildlife Photography page