Home•Sandhill Cranes of Michigan
Previous Next

Sandhill Cranes are a large, colorful, wary, and loud bird. Oftentimes I hear them in the distance long before I see them. This is advantageous since now I have time to set my camera and focus on them as they fly by. Compared to the smaller and faster birds I photograph like Kingfisher and Terns, the Sandhill Cranes are slow flyers and one of the easier Bird In Flight (BIF) subjects.

The following photos of them flying were all taken with a Canon 1Dx Mark II DSLR, using a 400 mm D. O. lens. They were taken at ISO 2,000, SS 1/2000th, aperture f/4. The 1.4X teleconverter was used on some of these photos. At the end of this page with the chicks I used the Canon 1Dx Mark III camera. 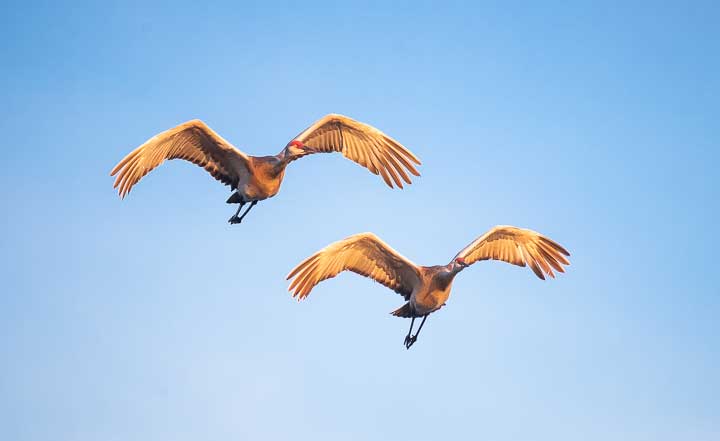 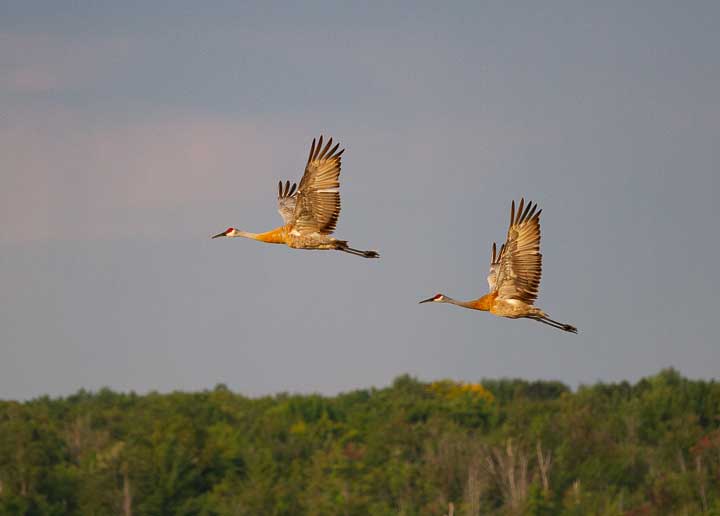 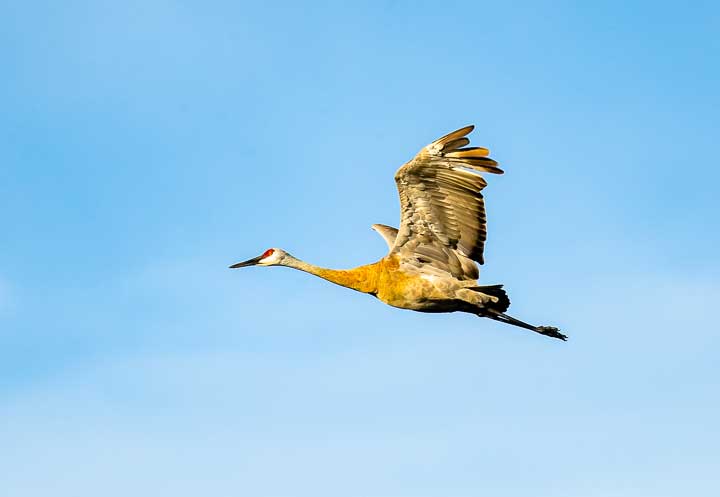 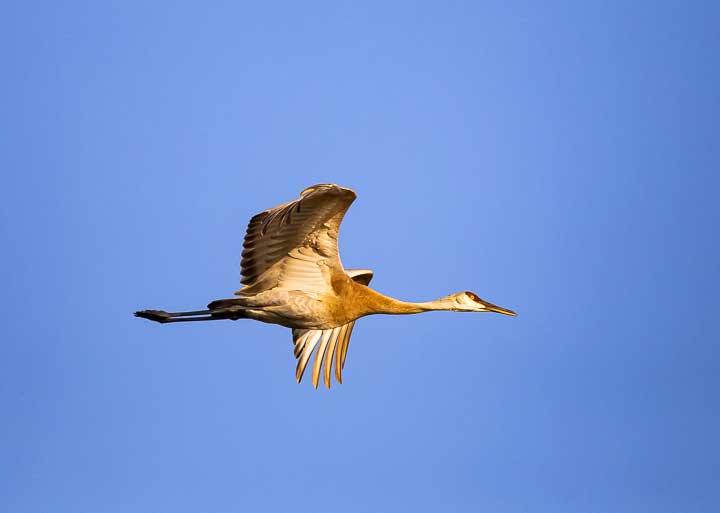 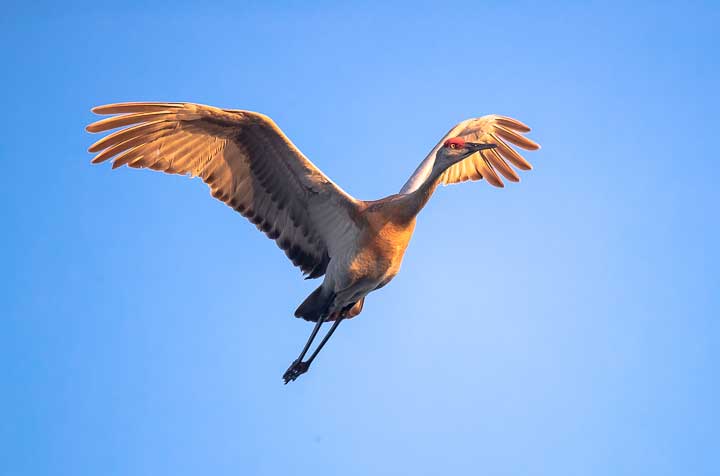 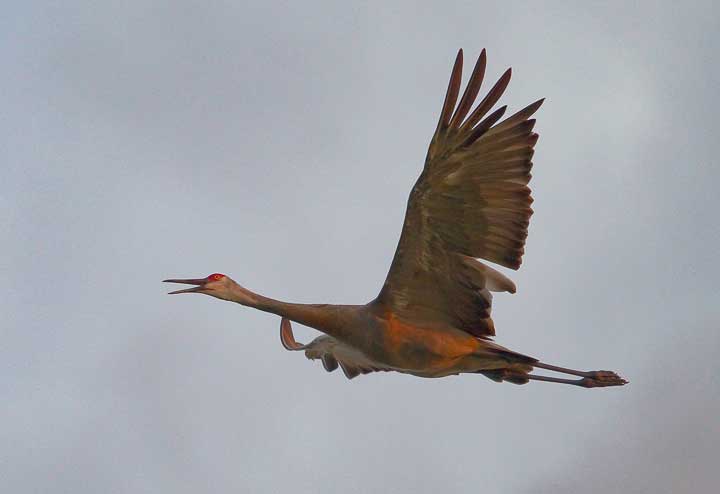 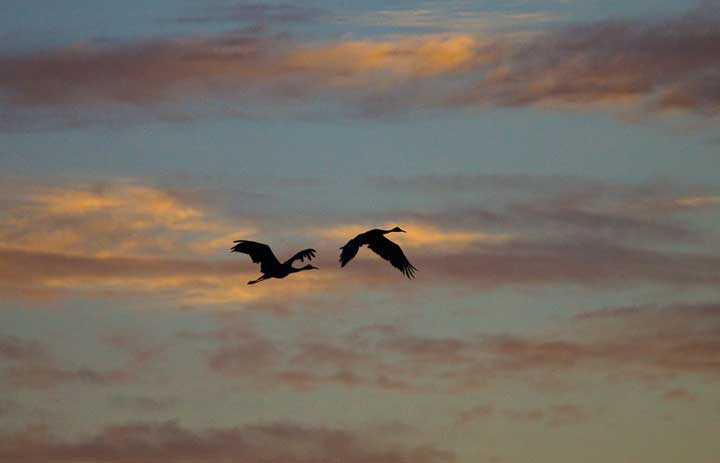 There is a field with corn and grains they sometimes frequent. This field has an elevated blind, and is an ideal spot to photograph them. The blind has been there for years, and the birds do not notice it. It is amazing how close such a wary bird will get to this blind as it feeds closer and closer. 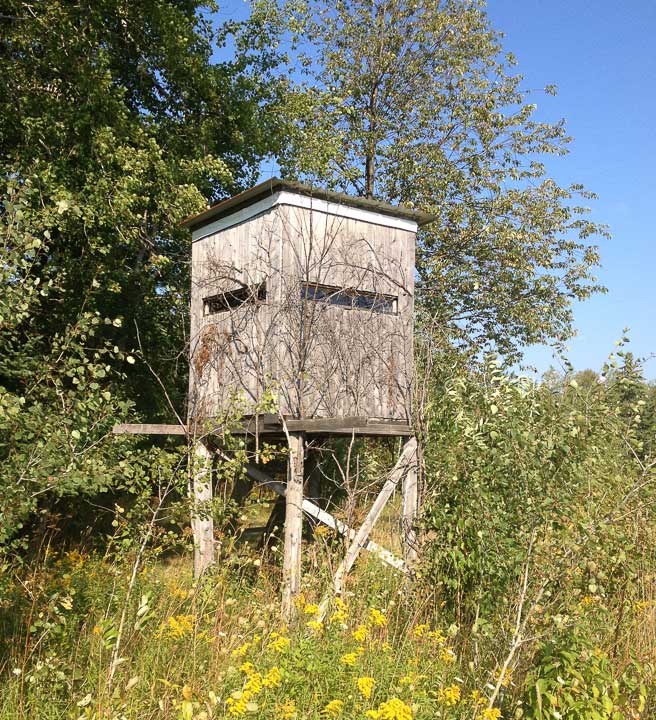 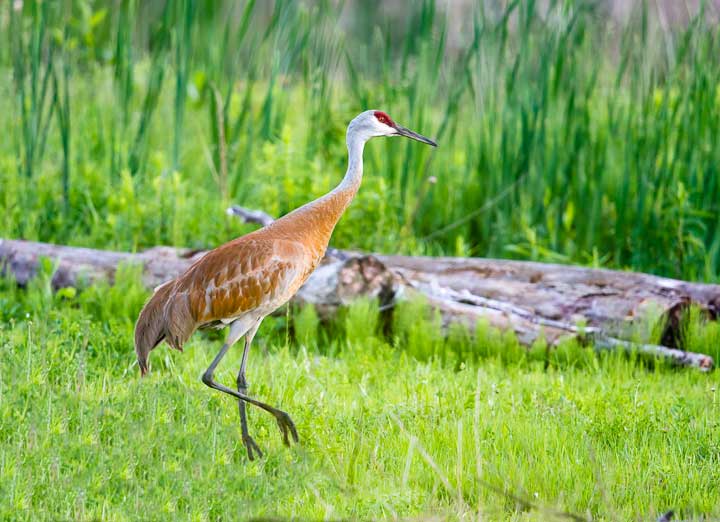 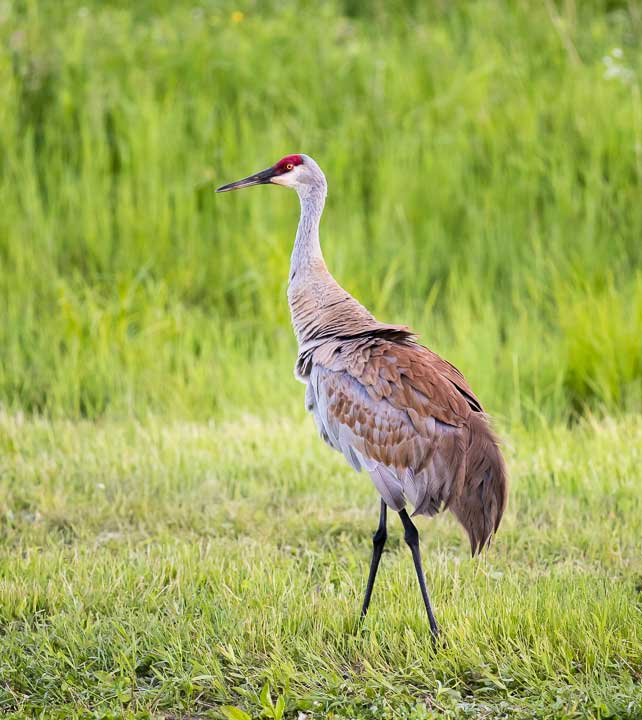 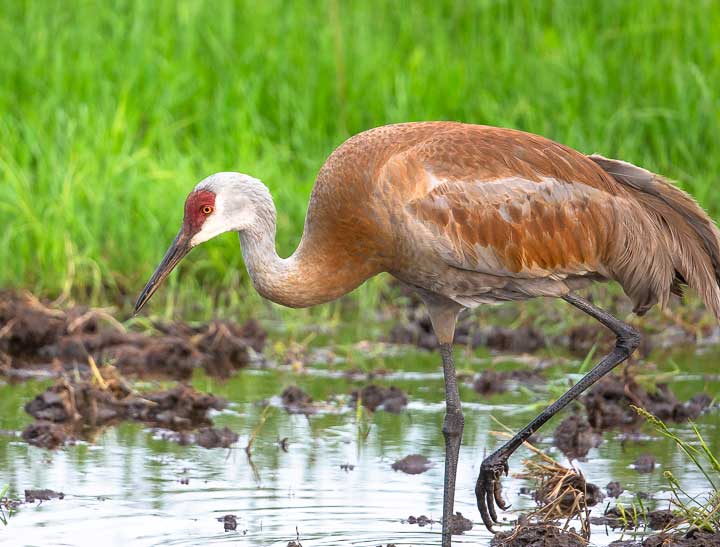 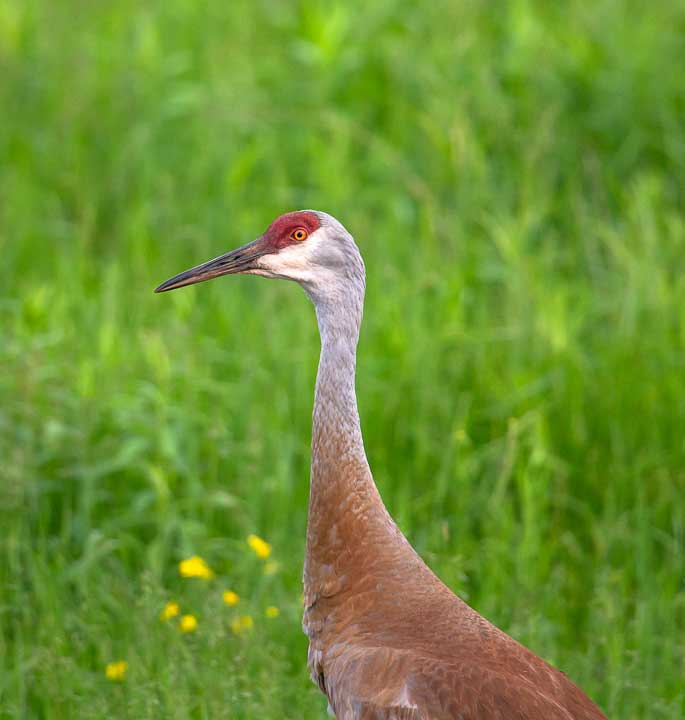 After 10 years of searching I finally came across adults with chicks (called Colts). They were in a marshy area at an inland lake when I was photographing bald eagles. I noticed them in the distance well over 100 yards away while they were feeding in a swampy area at the edge of the lake. 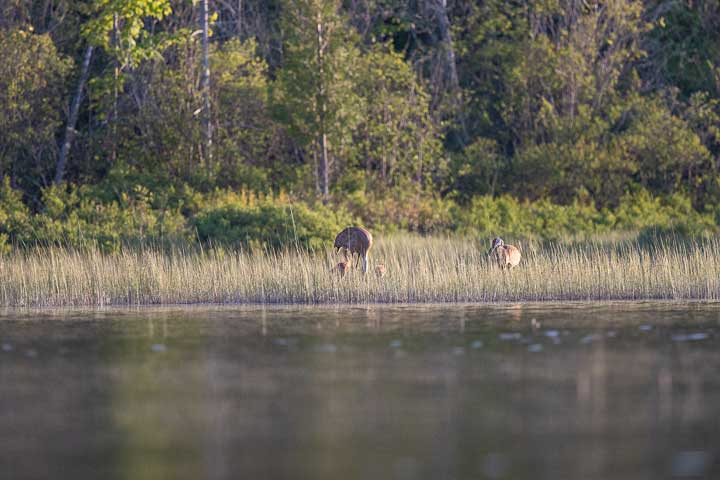 Now I just needed to make a plan to get close enough for good photos. Even with my 400 mm lens with a 1.4X teleconverter (equivalent now to 560 mm), to get good photos you need to be at most 30 yards away. This is a tall order for a wary bird with chicks.

I decided to approach them by using waders while walking along the swampy edge. The water is silty, and I risked stumbling into the water with my expensive camera equipment. As soon as I started closing that 100 yard distance they started walking further into the marsh, so plan A did not work. I decided to give plan B a try. Now I just had to figure out what plan B was!

I decided to try with a kayak while dressed in green camouflage. Even though they will easily seem me no matter what I wear, I seem to have good luck when I dress in colors that are natural for this area, which is green. The less alarming I am the better.

For the kayak to work I had to habituate them to my presence. I would kayak around the lake far from them, and slowly over many days got a little closer each time. They did not seem to be bothered as I slowly got closer, but still too far for good photos.

When I finally decided it was the day to get the photos I kayaked very slowly, and did not go directly at them, but went at an angle like a sailboat tacking with the wind. Many times I would stop my slow paddling and stay stationary for a few minutes.  I also did not stare at them, and kept my gaze slightly off to the side. 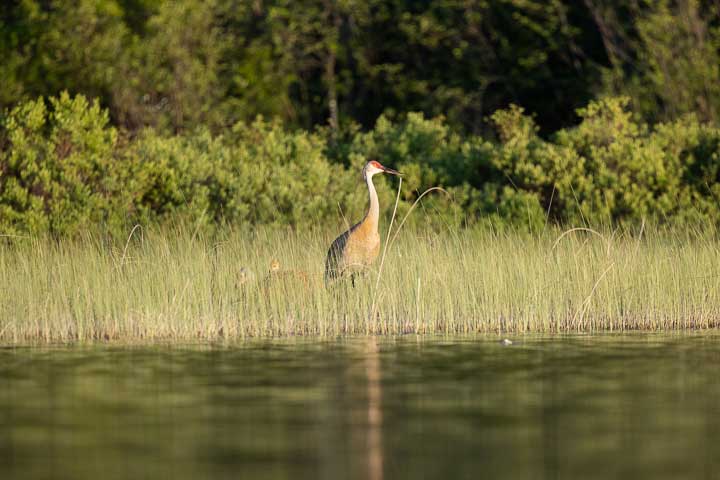 As I got closer this was the first time I took a photo. You can see the two chicks to the left of one of the adults. I was about 50 yards away at this point with my 560 mm lens.

I was lucky this time, because pointing a large camera and lens at wildlife is an aggressive move, and it is common for them to move away rapidly when you do this. The cranes did not move and I slowly drifted closer, eventually getting the photos I wanted. 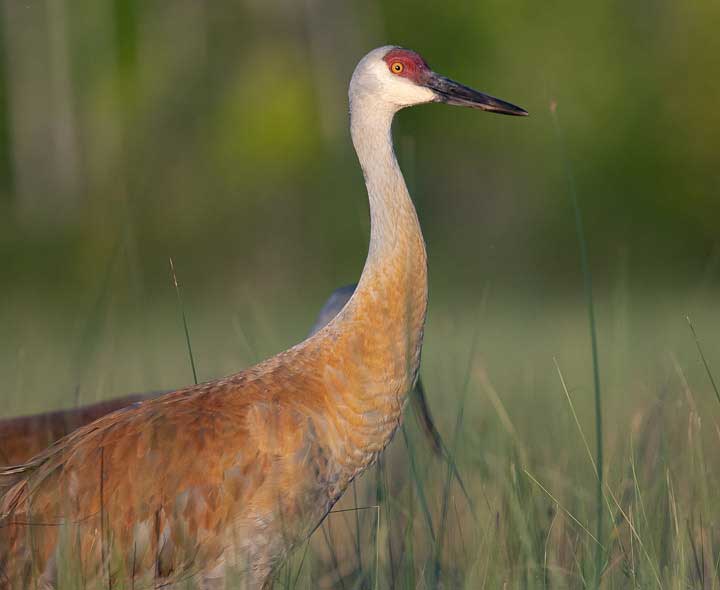 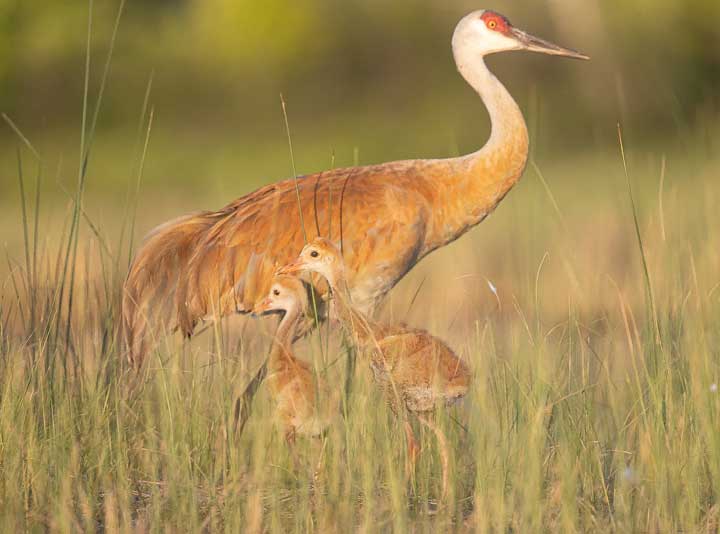 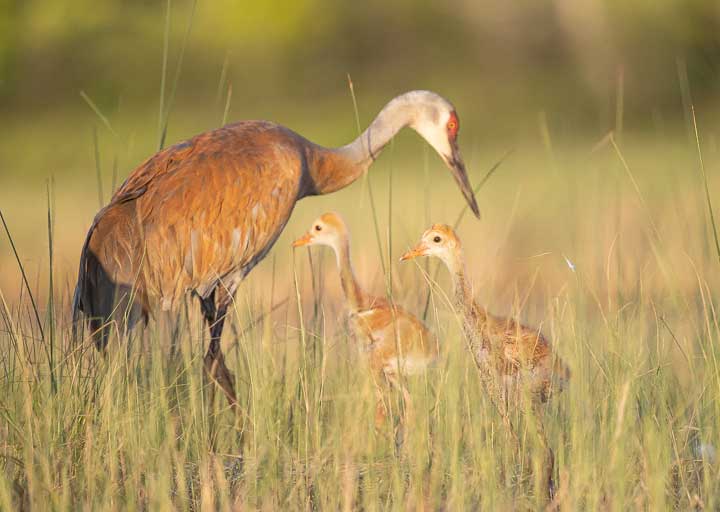 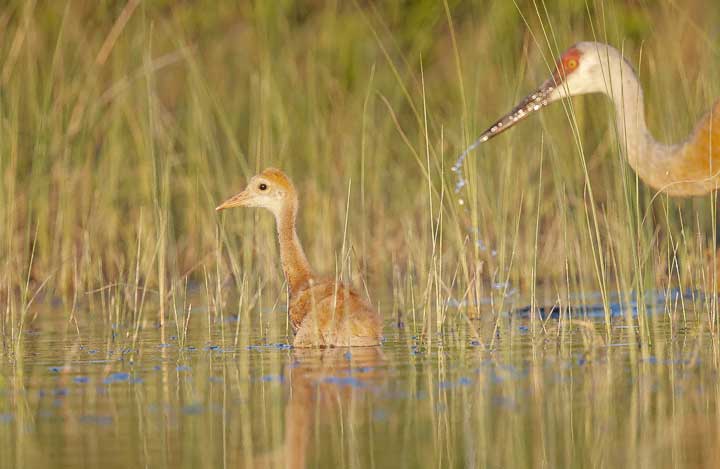 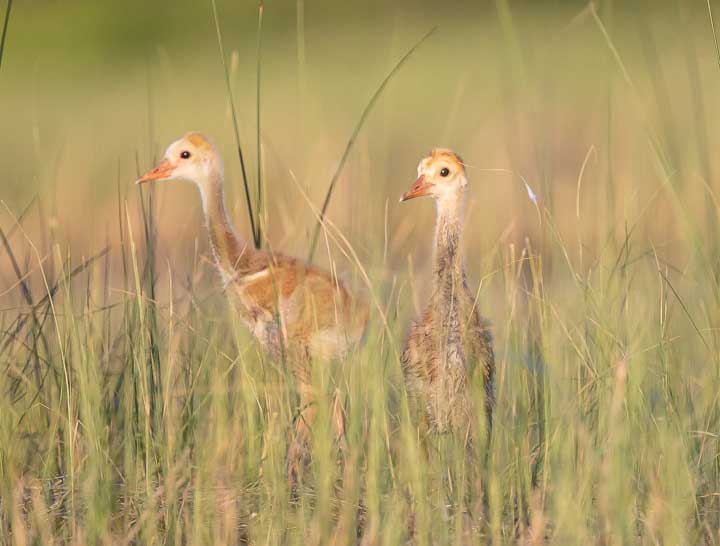 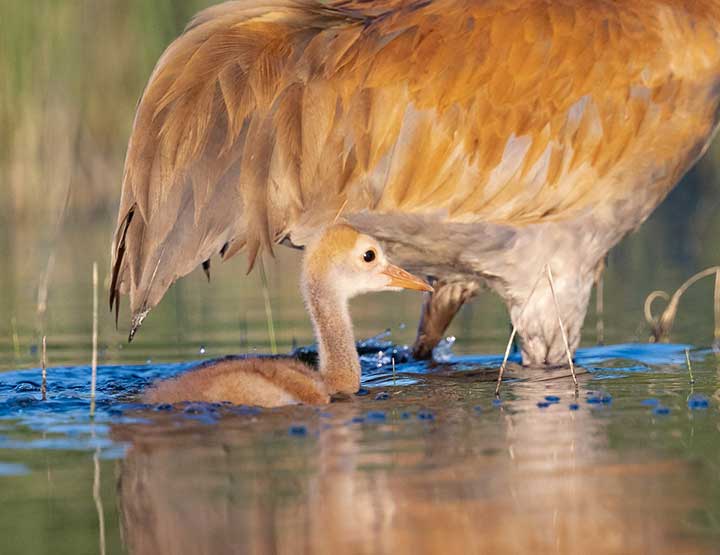 I will be going back for more photos as the chicks get larger. There is no guarantee the parents will let me get this close again. Patience is the key!

Taking photos like this requires professional level equipment that not only focuses fast with powerful lenses but it can stand up to the rigors of the outdoors. I order all of my camera equipment and accessories from Allen’s Camera. They have the best service, and do not push you into purchasing something that is not right for you. Many professional photographers purchase from them instead of the larger places like Adorama and B & H because the price is just as good but the service is better and more personal.

Click on the logo below to learn more. Ask for the Brandon, the owner, when you call or email.

There is much more wildlife photography, including my trips to all 7 continents and 11 trips to Africa, at this link.