Ringworm is caused by a fungus not a worm, and the lesion is not always in the shape of a ring. The scientific name for this disease is Dermatophytosis.

Since fungi are everywhere in our environment, it is difficult to determine what pets will develop the problem. The fungus that causes Ringworm can be cultured from the hair coats of normal dogs and cats. These pets might be carriers of the disease to other pets along with people. We tend to see the problem more in young animals.

People will sometimes pick up a case of Ringworm from their pet, but just because a pet has Ringworm does not necessarily mean that the people that interact with that pet will develop the problem. A dog or cat can transmit Ringworm to a person without showing any symptoms at all.

There are 3 specific fungi of significance in this disease:

The skin lesions that appear with Ringworm are variable, and do not necessarily form a ring. There will be hair loss, usually in small patches at first. as time goes on the patches may disappear or appear at other locations on the skin. There might be scratching due to itchiness. If the hair loss occurs on the face or feet there is a chance it is due to digging habits or exposure to rodents. 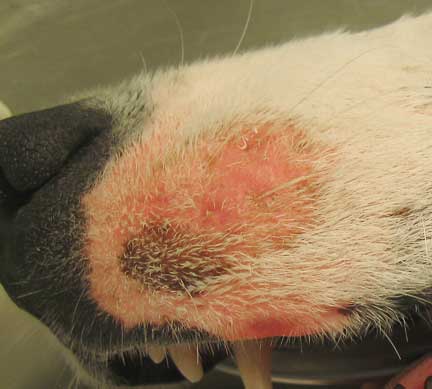 This patch is typical of the lesion seen in Ringworm. A diagnosis of this disease can not be made based just on the appearance of this lesion because other skin conditions (Demodex for example) can show similar lesions.

There are several different ways to diagnose Ringworm. All require some type of test because it is impossible to make the diagnosis just by looking at the skin. This concept holds true for all skin conditions; making a diagnosis of a skin disease requires all of the aspects of the diagnostic process.

If a person in a household has been positively identified with Ringworm by their physician it is possible they obtained it from their pet, even if their pet has no symptoms of the disease. This is especially important in multiple cat households. We will culture these pets using the culture technique we describe below, but in this case, we might run a new toothbrush over the hair coat to obtain a sample for culture.

One of the simplest ways to diagnose Ringworm is with the Woods lamp, which is an ultraviolet lamp, also know as a black light. 50% of the Microsporum canis species will fluoresce when the Woods lamp is placed near the area of hair loss. 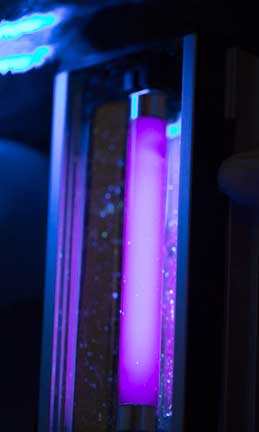 The lamp emits a purple/blue glow from the tube 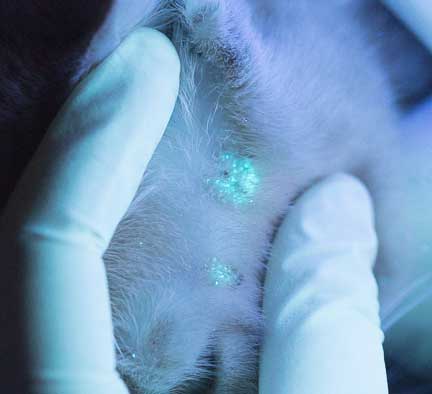 When there is fluorescence on the skin, it has a greenish appearance. Other material on the skin (dander, medication, etc.) can also fluoresce, so interpretation is important

Since only 50% of a certain species of Ringworm fluoresces under the glow of the Woods lamp, a culture is used to verify the diagnosis: 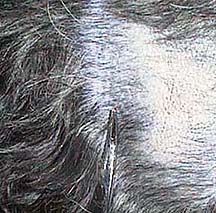 These hairs are cultured in a special media that inhibits bacterial growth and enhances fungal growth. This culture can be sent to our outside lab or done in-house. Since a fungus is a slow growing organism it can take up to four weeks to determine if there is growth or not.

The positive culture on the right, from our in-house lab, demonstrates two findings that are needed for a positive diagnosis. The first is the cottonish fungal growth, and the second is the reddish color of the culture media. This color change must occur at the same time the fungal growth appears.

Topical shampoo therapy is used in almost every case, especially in longer haired pets. It is common to clip some or all of the hair in some pets to make it more effective. These baths will also remove infected hairs that can be the source of an infection to people or other animals.

Specific anti fungal cremes are also used when a pet is infected in an area that already has sparse hair growth, or there are small, discrete lesions.

Oral anti fungal medications are also used in select cases.  These include ketaconazole and itraconazole. Our doctor will let you know if they are needed in your case.
In some pets the disease may resolve by itself.

Since fungi are everywhere it is almost impossible to prevent exposure. Pets that chase rodents, especially into burrows, might be at an increased risk.