Ferret’s are highly prone to several serious diseases. In addition to insulinomas and adrenal gland disease, they are also prone to cancer. This page shows a ferret that has a liver cancer.

Graphic photos from surgery are on this page.

Some ferrets do not show any symptoms while others exhibit lethargy and weakness and a distended abdomen. There might be a decrease in appetite and weight loss. Symptoms alone are not enough to diagnose liver cancer.

Like most diseases, the diagnosis of liver cancer is made based on history, examination findings, and diagnostic tests. In this specific case an exploratory surgery was performed to verify the diagnosis and determine the extent of the problem. an ultrasound could have been performed also. Since ferrets are prone to so many internal organ diseases, and since exploratory surgeries can be performed rapidly and yield a large amount of information, it is common to perform surgery instead of ultrasound. Some ferrets are diagnosed as having cancer when an abdominal surgery is being performed for other reasons (adrenal gland disease, spay, insulinoma). This is especially true for the ferrets that are not showing any symptoms of this disease.

Blood samples are an aid in the diagnosis and can also be helpful to rule out other important diseases that might be occurring simultaneously. Our laboratory specializes in working with ferrets, and has a special blood panel for them.

We are commonly asked how the heck do you get blood from a ferret. They are certainly one of the more difficult patients to obtain blood from. This is where the expertise of our nursing staff comes into play. a very small needle is used because the veins are so fragile. This ferret is having its blood taken from a vein on the side of its rear leg.

This test tube is filled with fluid that was taken from a ferret that had a distended abdomen due to liver cancer. analysis of this fluid in conjunction with other diagnostic tests gives us a clue as to its cause.

A useful tool as an aid in this diagnosis is radiography. It gives us a clue as to the presence of fluid along with abnormalities of the internal organs.This ferret is laying on its right side, and has a distended abdomen due to a large liver and fluid in its abdomen. It also has a large spleen. In addition, there are 3 metallic clips visible just under the kidney from a prior surgery for adrenal gland disease. The clips were used to stop bleeding when the diseased adrenal gland was removed. The identified organs are: Liver (L), Stomach (S), Kidney (K), Spleen (SP) and Bladder (B). a view of this same ferret while it is on its back shows the large area of the liver and the large spleen. Look carefully at the spleen because it is folded over on itself in this picture and is larger than it first appears. 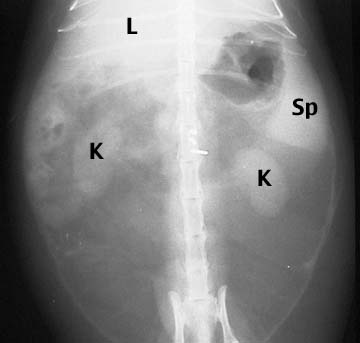 Whenever we suspect cancer we take a radiograph of the chest to look for evidence that the cancer has spread. We use the chest for this radiograph because the small blood vessels that are located around the lungs act as a filter to trip cancer cells that have spread. The black background of the lungs allows us to visualize these cells that are white in color.

In this same ferret as above we are looking at a side view of its chest with the head to the left. The windpipe (W) goes from left to right, the Heart (H) is in the very center, and the air filled Lungs (Lu) are above the heart. To the right of all of these structures you can see the large white area that denotes the large liver. 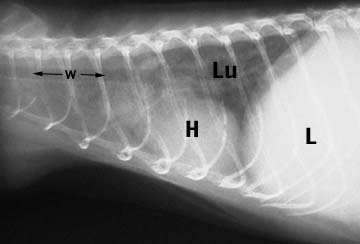 The above information gave us reason to suspect a high probably of liver cancer, so an exploratory surgery was performed. The owner was aware of the poor prognosis in this case but wanted to know for sure what was going on.

The following area contains graphic pictures of an actual surgical procedure performed at the hospital. It may not be suitable for some children (and some adults also!).

Brandi is a high risk anesthetic patient. In addition to the usual precautions we take for hypoglycemia and hypothermia, we have to be concerned with the induction of anesthesia. a special induction chamber is used for Brandi to breathe in the anesthetic gas and slowly go to sleep. You can see her doing what ferrets do best when they fall asleep-curl up.

Once she is relaxed enough a small tube is put into her windpipe to allow us to give her 100% oxygen along with precise amounts of anesthetic. In this view you can see her breathing tube on the left. She has been clipped for surgery and her final prep is about to begin. The distended abdomen is obvious. The pink bandage on her left front leg is where her intravenous catheter (IV) is placed so that we can accurately give her fluids.

We made a rapid entrance into her abdomen due to her anesthetic risk. What we encountered was a abdomen filled with blood. In this picture there are intestines visible on the left with abdominal fat on the right. Encountering this much hemmorhage at the start of the surgery is not a good sign.

The tissue was very delicate and bled easily when touched. In this picture we are using a laser beam to cauterize bleeding blood vessels. 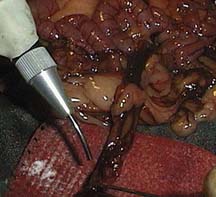 When the bleeding was relatively under control we slowly exteriorized the severely diseased liver, seen here under Dr. P’s fingers. The spleen is starting to become visible under the surgeon’s hands (arrow). 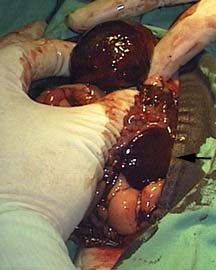 A closeup of this liver lobe shows how enlarged and hemmorhagic it is. For comparison purposes, a normal liver is below this picture of a diseased liver. 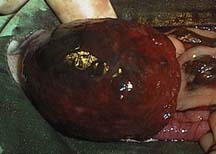 Notice the tremendous difference in color and size in this normal liver lobe.

The liver was so delicate (the medical term is friable) that it bled significantly when touched. We were unable to get an adequate biopsy due to this problem We are using the laser beam again to control the bleeding we caused. 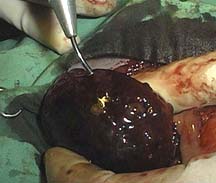 After we checked the liver we exteriorized the spleen. It is enlarged and hemmorhagic also. Go back up to the x-ray and now see if you can visualize the full size of the spleen.

A very important organ to check during and exploratory surgery is the adrenal gland since adrenal gland disease is common in ferrets. Brandi had her left adrenal gland removed previously. We know this because we did it and because of the hemoclips on the x-ray we showed you above.

Brandi survived the surgery (we are not sure her mother has recovered yet). Unfortunately, several months after this surgery we euthanized her because her problem had progressed significantly.