This page summarizes the complex disease know as Cushing’s disease, also know as hyperadrencorticism. It is a disease that occurs from the overproduction of cortisone by the adrenal glands

The adrenal glands are small paired glands buried in fat in the front of each kidney. Even though these glands are small, the cortisol they secrete, along with their other functions, have great significance to normal physiology. The internal architecture of the adrenal gland is made up of several distinct zones.

These tiny organs have a profound influence on many internal organs. The hormones they secrete work in unison with other internal organs, particularly the liver, and have a profound effect on the body. They also interact with many other hormones that have the opposite effect, usually in some type of feedback mechanism that is monitored by the brain. This interaction is complex, so a summary of adrenal hormone physiology is presented.

Cortisol, also commonly known by the slang term “steroids”, is a hormone that is essential for life. Cortisol maintains a normal blood glucose level, facilitates metabolism of fat, and supports the vascular and nervous systems. It affects the skeletal muscles, the red blood cell production system, the immune system, and the kidney system.

Stress will increase the level of this hormone in the bloodstream. This includes surgery, infection, fever, and hypoglycemia (low blood sugar). The level of this hormone continually fluctuates in the bloodstream depending on physiologic needs. This continual fluctuation adds to the difficulty of diagnosing Cushing’s, which you will learn about soon.

To control the level of these hormones, the hypothalamus and pituitary gland in the brain secrete chemicals into the bloodstream. One of these chemicals is called adrenocorticotrophic hormone (ACTH). It is the amount of ACTH circulating in the blood stream that tells the adrenal glands how much cortisol to secrete. There is a negative feedback loop that allows the hypothalamus and pituitary gland to refine precisely how much cortisol circulates in the bloodstream. The more cortisol secreted by the adrenal glands, the ACTH secreted. This allows the body to precisely refine the levels of cortisol, and change cortisol levels rapidly due to changing physiologic needs.

Cushing’s disease has a large effect on the skin. Many skin conditions have similar symptoms, so numerous diseases have to be kept in mind when making a diagnosis. These include hypothyroidism,skin allergies, sarcoptic mange, demodectic mange, and Ringworm.

A thorough approach is needed for a correct diagnosis of Cushing’s. In every disease we encounter we follow the tenet’s of the diagnostic approach to ensure that we make an accurate diagnosis and so that we do not overlook some of the diseases that are also encountered in pets as they age.

This disease tends to occur in older dogs that commonly have other problems. Some dogs die of other diseases before the symptoms of Cushing’s become a significant problem. Treating Cushing’s does not necessarily give your pet a longer life. The goal of therapy is to give your pet a better quality of life.

Underlying problems need identification and treatment. If your dog is hypothyroid the problem needs to be corrected with supplemental soloxine. Skin infections and internal organ problems like kidney disease need treatment for a successful Cushing’s outcome. Urinary tract infections need to be cleared up with the use of antibiotics, and underlying diabetes mellitus needs to be regulated with insulin. Some dogs with large tumors of the pituitary gland might initially respond to medical therapy for pituitary dependent Cushing’s. The Cushing’s symptoms, especially neurologic, might recur as the tumor progresses. Several different drugs have been used over the years to treat this disease. The 3 most common and effective ones will be described.

This drug should be considered first in the treatment of PD Cushing’s. It is used for Parkinson’s disease in people and is also used to treat canine cognitive dysfunction (CD). This is helpful because one medication can be used to successfully treat 2 diseases that occur in older dogs.

It is given daily for 2 months, with the dose increased if the symptoms don’t diminish. Side effects are negligible. The majority of PD Cushing’s dogs will show an improvement in symptoms within the first 2 months. If there is no improvement within one month after the dose is increased then concurrent illnesses need to be looked for. If they do not exist then therapy with mitotane should be instituted. This drug should not be used if your pet is being treated for Demodex with Mitaban, or with antidepressant medications or Prozac.

This drug, know by the trade name of Lysodren, selectively destroys part of the adrenal gland. This limits the amount of cortisol that the adrenal gland secrete can secrete. Pets that are on insulin for diabetes mellitus need to have their insulin dose adjusted downwards when given mitotane. It should be administered with meals to enhance its absorption.

Side effects can occur with this drug:

You need to closely observe your pet when it is on mitotane for any of the above side effects. If they occur you are to immediately stop the use of mitotane. We will give you cortisone pills to give at home if side effects are severe enough.

Both of these effects emphasize the need for continual monitoring of your pet. This means close observation at home and ACTH stimulation tests every 3-6 months.

This is a drug routinely used to control fungal infections. It has a different mechanism of action than Mitotane. It inhibits cortisol production in dogs and humanoids by preventing enzyme pathways from functioning properly. Ketaconazole works for PD and aT Cushing’s.

It needs to be given at a test dose initially to watch for anorexia or emesis. If tolerated well a loading dose is given for 7-10 days. after an ACTH test to determine if the cortisol is in the normal range the drug is give every 12 hours for the rest of the dogs life. This is a more expensive proposition than mitotane.

This form of Cushing’s is the easiest to treat since we are not giving a medication but taking one away. In most cases the elimination of exogenous cortisone will return your pet to normal function, although this might take several months. Some of the skin changes might take longer, and may not even return completely to normal. In some cases we use a decreasing dose of supplemental cortisone for several weeks to give the adrenal glands time to resume normal production of cortisol.

The surgery to remove the cancerous adrenal gland is called an adrenalectomy. It is a specialized surgery that is not routinely performed. Post operative complications are common.

Cushing’s in cats is rare compared to dogs. One reason is because they tend to be more resistant to higher levels of cortisol, especially if iatrogenic. The disease follow a similar pattern in cats and dogs with a few notable exceptions:

This picture is from an older cat that was at the groomer to be clipped. The skin literally peeled off like wet tissue paper when the groomer attempted to clip some mats. 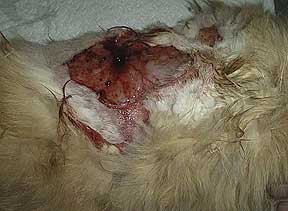 They do not routinely show any changes on a regular blood panel or urinalysis. If the alkaline phosphatase is high it is usually due to liver changes from unregulated diabetes mellitus.

The ACTH stimulation test is used but 2 blood samples need to be analyzed at 30 and 60 minutes, instead of the 1 sample at 2 hours for the dog. This is because the increase in cortisol is variable in the cat.

The LDDS test is used but the dexamethasone that is injected needs to be given at a higher dose.

Medical therapy is generally unrewarding in cats. Surgery is needed to remove one of the adrenal glands if the gland has a tumor, and both glands if the problem is PD. If both glands are removed the cat has to be on supplemental cortisone for the rest of its life. Unfortunately, cats with Cushing’s can be poor anesthetic risks due to diabetes mellitus and fragile skin. When this occurs we sometimes will use medical therapy to help control the problem and make our patient a better anesthetic risk.